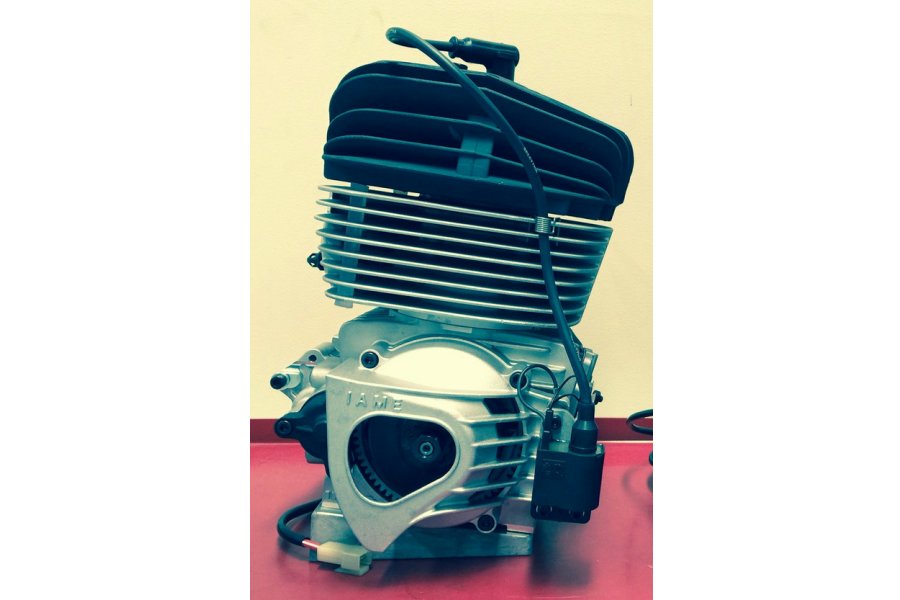 The first batch of IAME KA100 ReedJet engines are nearing completion at the IAME Factory in Italy.

The KA100 engine will be added to the Junior National, Senior National, Junior Clubman and Senior Clubman Classes at State and Club level from 1 January and will be eligible for use on all KA licensed tracks and competition from that time.

The KA100 engines will be the engine used in the KA Junior and KA1 Classes in the new Australian Kart Championship which kicks off with Round 1 on April 3, 4, 5, 2015

The KA100 is a completely new engine that has been developed by IAME taking account of specifications developed over a number of years by the former AKA Inc. and adopted following rigorous testing and benchmarking by Karting Australia.

The engine is being distributed nationally by Remo Racing Pty Ltd.

Managing Director of Remo Racing Pty Ltd Remo Luciani, sat down with Karting Australia’s Lee Hanatschek recently to expand on the exciting new engine that will grace Australian circuits in 2015 and beyond.

Q: This is an engine that has been developed from scratch, tell us about the process for its development.
A: Initial concepts for this engine began around 2010, when the former National
Karting Council of the Australian Karting Association Inc. began to investigate future engines for the sport. Once it was voted on and agreed by the State representatives that a new engine was the best way forward for the sport in Australia, I started to work with the IAME factory to develop an engine that would suit what was being requested by the AKA.

The direction given from the AKA at that point of time to engine manufacturers was to take the principles of the Yamaha engine and improve on the pitfalls of the engine, make it an electric start and have it fitted with a clutch.

After that we started testing cylinders, heads and different configurations of an engine until we came up with an engine package that I believe with my 33 years of experience is more enjoyable to drive than the Clubman engine before it, which is what Australian karting has been built on over many decades.

During the past four years, there has been a lot of data going back to Italy to the
IAME factory to develop this engine to fine tune it and ensure that it is perfect before we put it up to be considered. This included all aspects of the engine.
Every single element in the engine has specifically designed with the karter in mind.

We made sure that we covered off on all areas – even making sure that the engine would restart easily while it is hot.

In testing we would go to a track on 40ºC days, do 20 laps non-stop, spin the kart off on purpose, turn it off and restart the engine. It took a fair bit of work to get it right but we felt that it was vital to have the engine refire in all situations.

It’s a very simple engine to use, there’s no radiator, water pumps, electrics, it’s all back to basics – keep it simple, particularly for the newcomer to our sport.

It’s a concept and a specification that will have universal appeal and will eventually cross borders.

There’s nothing to say we can’t be world leaders, we wanted to bring back the pure karting style of engine with the modern touches.

Q: When is the first batch of engines scheduled for completion and delivery?
A: The first engines are currently in production and are scheduled to be completed during November. Some will be air freighted to Australia the majority of the initial shipment will be sea freighted.

For those who want to receive the engines during December, we will subsidise the cost of air freight reducing the shipping cost by half to $150.00 to the consumer.

Q: How many engines are in the first order?
A: The initial December shipment is 1,000 engines. The IAME factory is geared up to manufacturer 500 engines per month after that.
By the middle of the year we expect to have 2,000 of the new engines in Australia.

Q: How can I order one of the engines now?
A: Contact your local kart dealer today and place your order for as many engines required and specify whether you want them with the in December via airfreight or in January via the sea shipment. If you have difficulty in doing this, contact Remo Racing direct and place your order via phone on 03 5382 0241.

Q: What is included in the engine package?
A: The engine is fully complete ready to race. Just bolt it on, add fuel and go racing.

Included in the package is the engine, carburetor, exhaust, airbox, wiring loom, battery, engine mounts etc. There are no additional engine accessories needed to be purchased to complete the engine before it can be used.

Q: The engine runs around 90ºC cooler than a Yamaha, how is this achieved?
A: The KA100 engine has a very compact combustion chamber which produces less heat in the cylinder and the cylinder head. Hi-tech materials combined with a state of the art finning design have also aided operating temperature reduction.

Importantly the driver will not have to become an expert “carburetor choker” as is the case with the current Yamaha engines. There is also no need to alter the tuning whilst driving in a race.

Q: What is the difference between the engine used in the Clubman and National specification?
A: The only thing that changes is the exhaust manifold.

Q: What can you tell us about the technology being used in the new engine?
A: The KA100 engine is currently being manufactured to the highest specification level as per the current IAME X30 engine.

Here are some examples.
The same crank pin and big end cage designed for and used in the current 2014 IAME KZ engine which delivers around 48hp is used in the KA100. It delivers around 22hp in the ‘unrestricted’ specification, so it is well under stressed, leading to much long bottom end life.

The crankcase, crankshaft, clutch and electric starter system has been derived from a 125cc engine, with more power and higher rpm. This ensures that the KA100 has a very stable crankcase in relation to displacement. Being a 100cc engine, it produces much less vibration than a 125cc and no balance shaft is needed.

In three years of on-track testing in Australia we never broke a starter motor brush. Reliability of the engine and its components has been the highest of priorities right through the development process.

I’l compare it to some other IAME engines that Australian drivers would be familiar with. The “RL” Leopard has an 18mm crankpin and the KA100 uses a 20mm crankpin.

The KA100 is more similar to the X30 engine and utilises X30 parts including the complete clutch assembly.

Other features of the KA100 engine include:
– Simple Analogue ignition plant
– No microprocessor, no programmable unit.
– Simple cable harness, just for engine starting (starter motor only.)
– Engine start possible even without battery, by an external starter.
– Air cooling simplicity No radiator hoses, no water pumps, no belts makes it easier for the beginner for removing and replacing the engine.
Air cooled engines have been successful for many years.

A new machining process has been used in the manufacturing process for the Tillotson carburetor fitted to the KA100 engine.

The tolerances are individually checked during production.. The most important aspect of the performance of the carburetor is the venturi. The venturi is fully machined and has a very tight manufacturing tolerances so as to minimise variations between carburetor units.

Q: Is there a need to blueprint the KA100 engine?
A: NO. There will be no blueprinting allowed. The tolerances set on the KA100 are set very tight. You cannot re-machine any surface as the cylinder base, the top of the barrel, head surface face and the top of the crankcase are all marked with IAME and KA markings. These are not allowed to be removed. These have been implemented to ensure parity across all engines and that there is no requirement in the future to for the engine having to be totally re-machined to chase an improved performance. This makes it more of a level playing field and fairer for all competitors.

Q: Why is an analogue ignition being fitted instead of a digital ignition?
A: As much as you move forward with modern technology it has its pitfalls. It is quite commonly known that electronic ignitions can be tampered with and reprogrammed to gain performance. Hence, the reason we left the digital ignition out. With the analogue ignition, there are less things to go wrong and it is simpler.