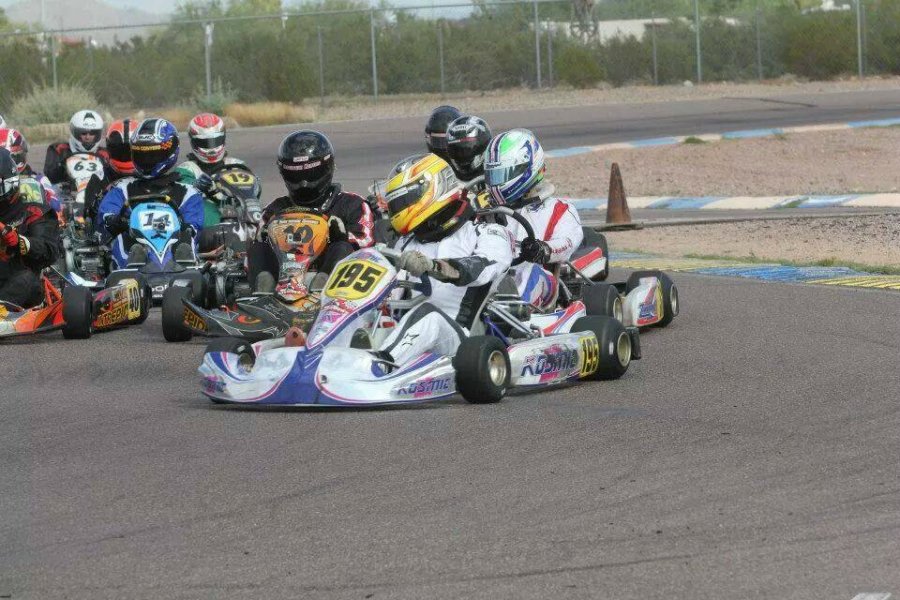 The 4-cycle Super Showdown presented by Briggs and Stratton returned to Phoenix Kart Racing Association in 2014, this time about a month earlier than its inaugural running in November of 2013.

The Halloween-weekend event was the second installment of an event dedicated to the fast-growing Briggs and Stratton racing community in Phoenix and on the west coast. Some of the best drivers in sprint karting attended, with 56 drivers from all across the country entered in five classes.

With a year under their belt, the organizers with Showdown, LLC were able to run a smooth event in perfect racing conditions – as opposed to 2013, in which racers had to battle rare rain showers on the first day of competition. They handed out $5,000 in prize money and giveaways, provided by crucial event sponsors in Briggs and Stratton, Innovative Karting, AZ Kart Werx, Northwest Valley Towing, J.C. Specialties, Target Distributing, Western States Petroleum, RLV, MG Tires, Bridgestone tires and Terrell Battery Corp.

As in 2013, the format was unique to most karting events, with six total races encompassing a mini-series that handed out points for each race. The points awarded were increased for each race, as were the lap counts. Adding to the difficulty in putting together a consistent six-race stretch was the full field inversion based on the points standings, with the driver highest in the standings starting last, and so on.

The headlining class during the event was the World Formula Medium class, which featured 13 national or PKRA driving champions out of the 15 racers entered. The full field inversion provided some of the most intense racing of the weekend with so many talented racers vying for the $500 prize to the winner.

The driver who was able to balance driving through the field with avoiding some of the trouble that inevitably arises with a full field inversion was former PKRA Champion of Champions Bryan Lemon.

Lemon, who hadn’t raced at PKRA since the end of the 2012 racing season, returned and looked as fresh as ever, winning three of the six races – the last two of which after starting 15th. He had to battle with the likes of Jim McKinney – the only driver running two classes during the weekend event – Phil De La O, Sean Conyers, Alan Michel, Curtis Ruth and defending PKRA World Formula champion Micah Hendricks.

That group, which all has competed and/or won at the SKUSA and Challenge of the Americas level, swapped positions and traded some paint while coming through the field.

In addition to Lemon’s three victories, De La O (Race 1), McKinney (Race 3) and Conyers (Race 4) got race wins. For Conyers, trouble in Races 3 and 5 kept him out of a shot at the overall victory, with some minor mechanical issues popping up at the wrong time.

The turning point in the event for this class came in the first event on Sunday, in which Lemon won and distanced himself from the group. Headed into the day, Lemon held just a six point lead ahead of Conyers and just nine on De La O. In fact, the spread from first to seventh was just 104 points.

Lemon’s Race 5 win came in a race that started with a pileup in Turn 2 and cost Michel (just 19 points back at the time, collected in the pileup with a bent axle) a real chance at the event win. Coupled with Conyers’ setback later in the race, the gap increased greatly. Lemon then emphatically sealed the deal with a Race 6 victory on a drive from the back to the front and all passes coming under green flag racing conditions.

Each race of the six saw different winners, though there was one constant among the finishes, and that was Jim McKinney finishing near the front. The young driver completed all 180 laps of competition in the two classes he entered, and added a Race 5 win in Heavy to go with his one win in Medium.

McKinney drove from the back in every race, having been a late addition to the Heavy class when the kart he was in was entered at the last minute and the Race 1 lineup being set by registration. Despite run-ins with a few different competitors, McKinney cleared the next closest in points to him by nearly 300 points.

Lorenzo Suozzi was that driver, and had he not faced trouble in a few races, may have given McKinney a better run at the overall victory. He turned a 20th-place finish in the first race into a win in Race 2, but couldn’t avoid dustups the rest of the event, and a setback in Race 4 gave McKinney a large gap headed into Sunday. Suozzi finished second and fourth in the two Sunday races, but was outran by McKinney both times.

Richard Cordova, who was one of only three drivers to return to the podium from 2013, also repeated as the Race 6 winner. Cordova fell victim to some of the hard racing on Saturday as well, with a setback in Race 4 taking him out of a real shot to win. His Race 6 win, though, vaulted him to third in the overall standings. 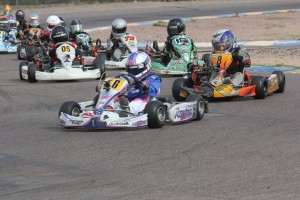 LO 206 Cadet had a solid field

Unlike in the adult classes, there was no full field invert at the request of the racers’ parents, and it provided a thrilling battle among the top three competitors.

Defending LO206 Cadet champion Diego LaRoque, who won all six races in 2013, returned and looked as strong as he did then. But this time around, he had to deal, primarily, with two other racers over the course of the six races to ensure himself a second Showdown crown. Toby Longnecker and Anthony Willis were those racers, and the three traded the lead countless times in each of the races.

LaRoque won all four races on Saturday, with Longnecker second all but one time – that belonged to Willis in Race 4. Willis started near the back in Race 1 with the lineup again based on registration, and that was the only race in which he didn’t finish in the top three.

He made up for that in spades in the final race in yet another spirited battle with LaRoque and Longnecker. LaRoque had won Race 5, basically ensuring an event win without any trouble in the final race. All three drivers led at least two laps in the 20-lap final, but it was a late-race pass of Longnecker by Willis that kept LaRoque from a second straight sweep.

Willis went from third to first in the closing lap, passing Longnecker on the final circuit to take the Race 6 victory. Willis’ win sealed third overall, behind Longnecker in second and LaRoque, who won back-to-back. 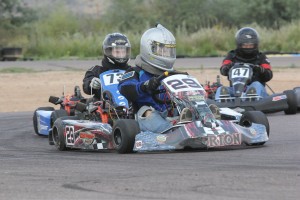 The LO206 category continues to grow

Though there were only five competitors in the LO206 Senior class, that didn’t stop the action from getting good.

Billy Lowery, in his first time at PKRA, came in and won the first three races on Saturday, with PKRA veteran Eric Vanderford close behind. Vanderford was pinch-hitting for Bernie Lacotta, who was supposed to race, but broke his leg just before the event and was unable to attend. Vanderford raced admirably in relief, winning Race 4 and finishing second in every other race.

The overall standings came down to the final race between Lowery and Vanderford, who were tied at 2,860 points through Race 5. Both drivers led laps in the final race, but in the end it was Lowery to pulled away late from Vanderford to take the Race 6 win (his fourth of the event) and the overall title.

This category may have only had two racers, but it also featured the most class of any race of the weekend.

Tyler Wells and Haydn Kaminsky made a two-kart race highly entertaining, swapping the lead repeatedly – once when they made contact and both went off track, returning at the same time to continue the battle.

Wells won Race 1 and 4, while Kaminsky took Race 2 and 3 on Saturday. Kaminsky then won Race 5 on Sunday, meaning whoever won the final race would take the overall victory. Race 6 belonged to Wells, who had to make up some ground and make the winning pass after a mistake early in the race.

Wells won, and so took the overall victory, but not without the classiest move of the weekend. On the podium after the event was over, Wells gave Kaminsky the set of MG tires he received for winning the event while running the MG Reds. Kaminsky had agreed to let Wells change front tires even though the event rules dictated competitors run one set unless there was a tire failure.

It was a gracious move by the winner, and in the spirit of the racing seen all weekend.