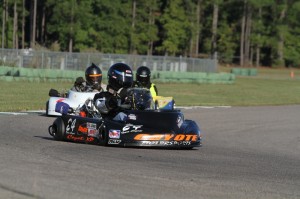 With an eye to utilize the 2014 Gold Cup season closer as a serious research and development weekend, Coyote Motorsports traveled to CMP’s challenging 0.7-mile kart track with a new-style XP and Wide Track chassis. Coyote owner Jim Lipari would race the new XP in the Animal Medium division and Florida’s Sean Meier was ready to test the new Wide Track in the Senior Pro Gas Animal classes.

Lipari was also focused on a national championship as Animal Medium wins at Jacksonville in March and South Bend in August had him in place to score the class title.

To our team’s delight, both the new XP and Wide Track unloaded fast for Friday practice, and minor adjustments throughout Friday and Saturday/Sunday race days had Lipari and Meier in contention with some of the best 4-cycle sprint racers in WKA.

On Sunday Meier put it all together and qualified on pole for Pro Gas Animal but would finish a close second to Heavlow in the heat race.

Following the heat, the Coyote team went back to work and found Meier a bit more speed, allowing Sean to wheel the new-style Wide Track to the main event victory, his first of the 2014 Gold Cup season. While still unofficial, we believe the win also propelled Sean to the 2014 Senior Pro Gas Animal national championship. Sean won the title despite not attending round two at Camden, Ohio, and this marks the second consecutive year a Coyote racer has won the Senior Pro Gas division. Dylan Zobkiw won the class championship in 2013.

While Meier was battling for wins in Pro Gas Animal, Lipari had his new-style XP rolling in the alcohol Briggs Animal Medium division. Lipari timed on pole at a fast 53.662 and would go on to win the heat and feature events by convincing margins.

On Sunday Lipari and Heavlow waged a spirited battle for the Animal Medium win until Heavlow dropped out with a mechanical problem. Jim cruised to the victory from there to give Coyote three senior-class Grand National wins on the weekend.

“The success at Kershaw gives us confidence in the equipment and new designs we’ve been developing,” Lipari said after the weekend. “We were fast right out of the box and that’s always gratifying. Then we were able to tune the chassis without having to make major changes. Of course we’re happy with the success, but we’re even happier that we’ll be able to pass our new developments onto our customers with our 2015 models.”

Kid Kart racer Blake Boon had another fine Gold Cup weekend with a win and a third-place finish in the LO206 Kid Kart main events. Riding his Coyote Kryptonite chassis, Blake recorded his fourth win of the season and bested the largest Kid Kart field a Gold Cup national has ever seen. It was great to see eight youngsters on the track in the 5- to 7-year-old division, and Blake did an outstanding job racing ahead of the competition!

Jet Tobin was also riding a Coyote in the Kid Kart class and he continues to gain experience. Jet finished both main events at Kershaw, a track he’d never seen prior to the Grand Nationals weekend.

An encouraging eight-kart field made up the LO206 Heavy finals at Kershaw. Patrick O’Neal entered the LO206 class for the first time this year and he had a fast Coyote under him all weekend. O’Neal distanced himself from the rest of the field in Saturday’s 206 main, scoring the win over eventual class national champion Matt Skaggs and local racer Jeremy Ghent.

O’Neal was in contention once again Sunday, but a late-race accident while battling for the lead forced him off the track and done for the remainder of the race.

Jacksonville native Jordan Mincey raced his Coyote to finishes of fourth and seventh in the 206 mains, while veteran Brad Farmer of Brad’s Karts & Parts finished sixth and seventh.

Stark – who has a new team website at JoshStarkRacing.com – was in contention throughout the weekend in his bright yellow No. 39. Josh finished second in Junior Medium on Saturday and came home third in the class on Sunday.

In Junior Heavy Mix, Stark raced his Coyote to finishes of third and fourth. And in the competitive 10-kart Junior Pro Gas main events, Josh recorded a pair of top-five finishes with a fourth on Saturday and a fifth place run Sunday afternoon.

Leon and Tortorell continued to improve in what has been both drivers’ first full season racing in the Gold Cup Series. Leon’s best finish came in Sunday’s Junior Heavy Mix final, which saw the Florida driver finish fourth, right behind Stark. Leon also finished seventh and ninth in the Junior Pro Gas finals.

Tortorell ran close to the top five all weekend but came up just short of netting his first Gold Cup top-five finish. Matt finished sixth and seventh in the Junior Heavy Mix features, and he finished eighth in both Junior Pro Gas races.

Brothers Jason and Dylan Zobkiw fielded their Coyotes along with Meier in the Senior Pro Gas Animal classes. Both Zobkiw brothers ran well throughout the weekend. Dylan never finished outside the top five in three races. The Charlotte, N.C., resident netted a fifth-place finish in the Friday Pro Gas Animal Money Race and came home fifth in Saturday’s Pro Gas Animal main and a strong third to Meier and Zach Linsell in Sunday’s final.

Jason Zobkiw was in contention throughout the weekend. Riding his No. 4 Coyote Wide Track, Jason finished eighth in Saturday’s race and improved for a sixth-place finish Sunday.

Michigan racer Cayla Chapman had one of her best weekends of 2014. Cayla, who has been dominated at her local track in Michigan this year, finished second to Lipari in both Animal Medium finals. Cayla and her father, Mike, again made the long drives to all Gold Cup national events in 2014 from their home on the Upper Peninsula in Michigan.

“I want to thank everyone for a great 2014 Gold Cup season,” Lipari stated. “We learned a lot and I believe our chassis and racers will be better than ever in 2015. Congratulations to all Coyote customers and supporters around the country on a great season, and we’re already working hard to prepare for 2015.”

In all, Coyote chassis won 15 Gold Cup feature races this year, good for second place in the 2014 series Manufacturer standings.

As always, if you need parts, support or have questions about our products, contact us at 585-352-0806, email coyotekart@aol.com and visit CoyoteKarts.com.