One of the most successful chassis in the history of the Superkarts! USA SuperNationals is CRG. Continuing the tradition is the CRG-USA operation, who is gearing up for the 18th edition of the prestigious event, set for November 19-23 outside the Rio All-Suite Hotel & Casino. The Grand Junction, Colorado-based operation will have a large contingent of CRG drivers from all over the world under the tent in Las Vegas, competing in seven categories, all gunning for the top step of the podium on SuperSunday.

“We at CRG-USA are very excited about the drivers, mechanics, and families we are working with at this year’s SKUSA SuperNationals. The list includes a number of champions, race winners and just all around great people to have as part of our racing family,” stated CRG-USA owner Stacey Cook. “The product we provide at the track is the best and we know that all the work put in this year will show on SuperSunday. I can’t thank our dealers enough for the work they have done to buil and support the CRG product.” 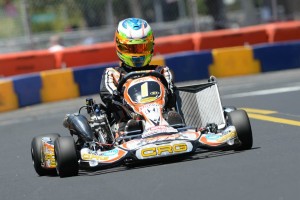 If you are looking to become the next shifterkart champion, CRG-USA is team you want to join! The team has scored at least one Pro Tour championship in the last two seasons – Sabré Cook the 2012 S2 Pro Tour champion, along with Joey Wimsett in S1 and Christian Schureman in S2 for 2013. Current champion and last year’s winner Wimsett is ready to defend his #1 SKUSA plate and victory, coming off a stellar performance at the KZ Super Cup event in Italy. Alongside him is Cook, who became the first female in histroy to qualify for the main event at the world championships. They are joined by the greatest karter in history – five-time world champion Davide Fore. The Italian is fourth in the Pro Tour standings, with a great shot at finishing on the championship podium after SuperSunday.

Four others will fly the CRG-USA colors in the S1 division, all with the speed to get on the podium. The ‘Flyin Hawaiian’ Alec Gumpfer is back with CRG-USA, along with native Colorado driver Christian Bird making a return to the squad. Mexican driver Fauzi Dib Saad will complete the six driver roster in S1.

A total of 12 drivers will compete in the large S4 Master Stock Moto category. Former S4 Pro Tour champion Jimmy McNeil is making a return to the S4 category after running the last few seasons in the S1 division, adding another bullet to the CRG-USA S4 arsenal for Vegas. Robert Marks has been the benchmark for the CRG-USA squad this season, and the Californian is looking to improve on his top-20 finish last year. Pacific Northwest driver Ben Johnston has been testing for two straight months to prepare for a solid run in Las Vegas. Florida driver Tim Ulmen has the speed to contend, along with Mexican drivers Juan Garcia and Victor Jimenez. California drivers Darrell Tunnell and Vivek Tanden, Colorado’s Hugh Templeman and Rob Vanderen, Texan Steve McCaffrey, and Florida’s David Levy complete the S4 roster. 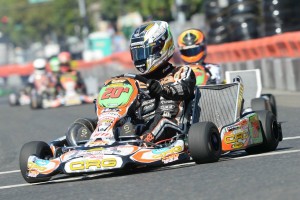 Also returning with CRG-USA is another former SuperNationals winner Felipe Fraga. The inaugural TaG Junior winner in 2008, Fraga is back to contend in the TaG Senior division. The Brazilian finished fourth in the category back in 2011. Fellow countryman Jonathan Louis dos Santos will join him for his first SuperNationals. The 20-year old has a long and successful history in the sport of karting back in Brazil, and ready to compete in Las Vegas.

The top international category in all of karting is the KZ division, featuring the purpose-built karting engines. CRG-USA will field three entries, aboard the world championship CRG chassis and powered by Maxter engines. ‘Mr. Five-Time’ Davide Fore will go double-duty, racing S1 and the KZ division, where he has claimed a number of victories around the world except for the SuperNationals win. Elder drivers Mark Abrahams and S4 driver Victor Jimenez will join the KZ field to compete against the best in the world.

Texas driver Billy Auffenberg will be making his first SuperNationals start, racing in the competitive S2 Semi-Pro Stock Moto division. Returning driver Ryan Lankenau from Illinois will be looking to qualify for his first SuperSunday. Completing the CRG-USA driver roster for the SuperNationals XVIII is S5 Junior Stock Moto drivers Evan Roshak from Colorado, and Hannah Williams from Texas, both with the speed to compete at the Pro Tour finale. 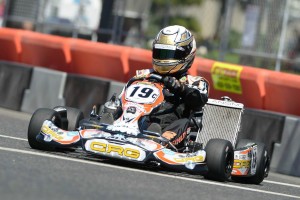 Billy Cleavelin is on the verge of the first TaG Master championship with CRG-USA (Photo: On Track Promotions – otp.ca)

CRG-USA is an official race team for SwedeTech Racing Engines, AiM Sports, New-Line Racing Products, K1 RaceGear, and Sniper. Anyone interested in joining the team should contact Stacey Cook at 855.TEAMCRG or via email stacey@crg-usa.com. Be sure to watch for the newly designed www.crg-usa.com and ‘Like’ them on Facebook.