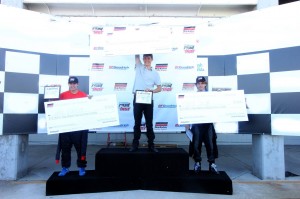 Dakota Dickerson of San Diego, CA took home 2nd place in the Skip Barber Karts to Cars Scholarship Shootout and was the only racer in this competition to win the Bryan Herta Career Enhancement Scholarship Award after competing against the top karters from around the world at the 18th Annual Shootout at the Sebring International Raceway in Florida October 28-30, 2014. This 3-day competition is the first step in the ladder system for young drivers whose goal is to race professional in open wheel cars.

The scholarship system provides a path all the way up through Indy Cars if successful. Past winners of Shootout awards include A.J. Allmendinger, Ryan Hunter-Reay, Ricky Taylor, Jonathan Goring, and Joel Miller. After learning fundamentals of formula racing, seminars by industry leaders, lapping sessions, and time sessions, the competitors are judged on their speed, camaraderie and ability to be coached. “It was a great learning experience and I met a lot of up and coming racers that help push me to the next level,” said Dakota Dickerson. “The instructors gave invaluable insight which I was able to apply to pull off a second place overall in the shootout.”

The awards total to $30,000 in Skip Barber race series credits. In addition, RaceCraft1 awarded more than $4,500 worth of prizes to the top three racers in the Karts to Cars Scholarship competition.

“Dakota is an outstanding young man,” said Herta, “and he has demonstrated an exceptional amount of talent, drive and heart. He will go far in his career and I can’t wait to see his growth in the Skip Barber Race Series.” Dakota commented, “It is an honor
to be chosen for this award. I look forward to competing in the 2015 Skip Barber
racing series.”

About Dakota Dickerson
Dakota started his racing career with go karting which was the mainstay of Dakota’s training as a racecar driver and he’s excited to now make the transition from karts to cars. With a successful start at a young age, Dakota has secured numerous driver championships from a variety of series.

About Bryan Herta
Bryan Herta began his racing career in 1990 in the Skip Barber Pro Series. After winning the Barber Saab Pro Series and Indy Lights Championship in 1993, Herta moved on to compete full time in IndyCar. Herta’s success as a driver has made him one of the most recognizable names in motorsports. As of 2006, Herta has started in the Indy 500 five times with three top ten finishes. Bryan Herta now owns his team and participates in the Verizon IndyCar Series and occasionally in the Firestone Indy Lights Series.