Another sold out year for event’s youngest division

It’s always exciting to see huge fields, knowing that the best of the best have come to battle it out for ultimate supremacy. A full roster of TaG Cadet drivers is set to compete at this year’s SuperNationals, in their fifth year at the world-renowned event. The category is truly international, with nearly a third of the drivers coming from outside of North America. The recent Rok Cup International Final in Italy saw 100 drivers take part in the category, and there is no doubt that if the space was provided, the SuperNats entry list could easily have reached the 120 mark. The first three TaG cadet victors at the SuperNationals – Patricio O’Ward, Logan Sargeant, and Anthony Gangi Jr. – are all building solid racing resumes in karting and car racing, which bodes well for the future champions of the class. This year’s race should be the best yet, with a field stacked with talent. 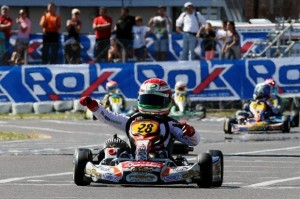 Last year’s event went down to the wire, with Italian Leonardo Marseglia winning aboard his Top Kart. It was an ‘out of nowhere’ win, as Marseglia never stood out in the rain, which dominated the first two days of on-track action. When Sunday dawned dry, Marseglia fought his way forward after starting eighth, eventually scoring the victory. Leonardo’s 2014 season began with Lenzo Kart, but a recent move to CRG has brought in some major podium results. The Italian Rok Cup champion finished second at the Rok Cup International Final and then drove to third at the WSK Final Cup event in 60 Mini. He is slated to defend his title in Las Vegas this November, looking to become the first driver to win back-to-back SuperNationals in the TaG Cadet category’s five-year history.

Four other top-10 finishers from 2013 return this year, all looking to garner their first SuperNationals victory. Aussie Jack Doohan (Tony Kart) was the top driver through qualifying and the heat races last season, and he started SuperSunday from the pole position. Doohan fought for the win, but ended up fourth.  He has been winning all season ‘down under’, and he’ll be back in the States for redemption in his third SuperNats start. Also returning to Vegas for a third straight year is Gianluca Petecof (AM Kart). The Brazilian has enjoyed much success in the United States. Finishing seventh at last year’s SuperNats, Petecof won a championship at the Florida Winter Tour in 2014, and won the Rok Cup USA Mini Rok championship.

The top returning Americans are the d’Orlando brothers from Koene USA. Nicholas finished eighth after starting back in 23rd, while Michael placed tenth. Both are among the contenders in SKUSA Pro Tour championship as well, and another solid campaign in Vegas is on the horizon. 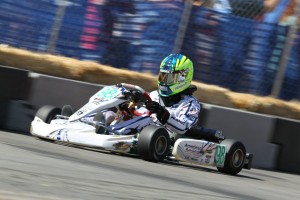 Arizona driver Jagger Jones (Tony Kart) leads the SKUSA Pro Tour point standings going into Las Vegas. After a tough opening round in Dallas, Jones bounced back to land on the podium in second on the final day of the SpringNationals. At the SummerNationals in Modesto, it was two more runner-up results for the Pure Karting driver, which propelled him to the top of the championship chase. In last year’s SuperNationals, Jones was unable to qualify for the main event after coming from the tail of LCQ field to place eighth, just a few positions away from transferring through. Jagger is coming off possibly the best race of his young career, placing 10th in Italy at the recent Rok Cup International Final against 100 other Rokkers from around the world.

Michael d’Orlando is the top challenger, for certain, sitting just 43 points back when the single race drop is factored in. A two-time victor this season, d’Orlando has the package to win in Vegas, and secure the championship. Behind him by 22 markers is Lachlan DeFrancesco (Benik). Consistency has been the key factor to his positioning for the title, earning three top-five finishes, including one podium result. Like Jones, DeFrancesco had to come from the LCQ a year ago, however, the amount of racing that he has done in the last 12 months puts him as one of the challengers for the SuperNats win. Momentum is on the side of DeFrancesco’s Benik teammate Lance Fenderson. Currently fourth in the standings, Fenderson scored the most total points over the four Pro Tour rounds, but he moves back when factoring in the drop race.  You cannot drop the SuperNationals points, so consistency throughout the weekend is crucial.  Lance will need to make up 90 points on Jones for a shot at the crown, which will be tough, but the youngster has been on his game. Rounding out the top-five is Nicholas d’Orlando. Two top-five results, including a third place effort, have the New Yorker needing some help as he trails by 186 points. 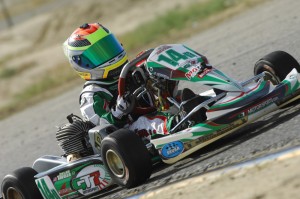 Dylan Tavella has won in SKUSA competition, but never the SuperNats (Photo: On Track Promotions – otp.ca)

When you think Cadet racing, one driver stands out among the rest. Dylan Tavella’s 2014 season has been phenomenal, adding titles and victories to his growing resume in what will likely be his final season in the category. The GT7 Motorsports/Tony Kart driver started the season off with a championship at the Rotax Challenge of the Americas on the west coast, then spent the summer winning two championships at the United States Pro Kart Series, and he also earned the US Rotax Grand Nationals title. A SuperNationals victory is all that remains to complete the dream season.

The East coast has some impressive drivers, and we need to look at Alex Verhagen and Sam Mayer, as well. Verhagen was a contender last year, qualifying second in Vegas, but trouble in the main dropped him down the order. The KartSport North America/FA Kart driver ripped off three victories at the end of the USPKS series this summer to make him a sure contender for Vegas. Mayer was fast all season in USPKS competition, but could not get to the top step of the podium. A wreck on SuperSunday ended his chance of a podium last year, but the Franklin Motorsports/Merlin driver is returning to Nevada for redemption.

Early on, the SKUSA Pro Tour championship was in the hands of Myles Farhan (Mack Motorsports/Tony Kart). A solid SpringNationals – including a win on Sunday – was hampered however by a tough SummerNationals outing on the temp circuit in Modesto. If Farhan can come to grips on the slick parking lot configuration in Vegas, he could be a contender for the race win. Trey Brown (Ryan Perry Motorsports/Tony Kart) is the third different winner on the Pro Tour season, as he was victorious in Modesto. Speed and poise on the temp circuits could be on the side of Brown, who also missed SuperSunday last year by just one position. 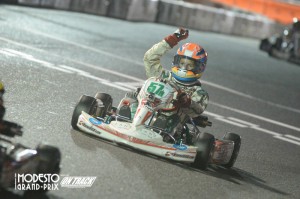 The d’Orlando brothers, including Michael, will be among the contenders in Vegas (Photo: On Track Promotions – otp.ca)

The talent at the top of the TaG Cadet field is ridiculously deep.  I love seeing the international drivers in the field, and competitors from both the East and West Coasts of the US.  While Doohan and Marseglia will be stiff competition, I believe that Jagger Jones will rise to the occasion to score the biggest win of his young career.  Jones has been improving steadily and his comeback success at the Rok Cup Int’l Final in Italy in October should provide him with the confidence he needs to arrive in Las Vegas ready to battle for the win.  He’s been strong on the temp circuits, with two runner-up finishes in Modesto and California ProKart Challenge wins in Lake Elsinore and Lancaster.  D’Orlando will be in the fight all week, and I believe that he has a great shot at the win too.  I put Fenderson in the P5 slot, but I’d be fine with re-ordering them in any way, because I think it will be that close.  I was super impressed with Lance at the Rotax Pan American Challenge at Mooresville in October, and he could easily vie for the win here as well.

I love history. Last year with the Rotax Grand Finals and the Superkarts! USA SuperNationals in back-to-back weeks on US soil, I was in my element. I am always looking to see history be made, and that is what I am predicting for SuperSunday in TaG Cadet. Marseglia will become the first back-to-back winner in the TaG Cadet division. It is not something that will be easy, but partnering with the successful PSL Karting/CRG operation should help with that. I think the international drivers will once again win the majority of the spots on the podium, this one including three different countries outside the United States with Brazilian Petecof and Aussie Doohan. The d’Orlando’s have been tough all season, as has Tavella, with both looking for their first SuperNationals victory.