The 2015 edition of the Rotax Grand Finals will mark the first time in the 15-year history of the race that the United States enters the event as a reigning world champion.  Last fall in New Orleans, in dramatic fashion, Juan Manuel Correa made a last lap, last corner move for the Junior Max victory, on United States soil, at the NOLA Motorsports Park. Correa became the first American to win the Rotax world championship, leaving big shoes to fill for the five drivers competing in the category this year for Team USA. The task is massive, as four of the five pilots will be making their Rotax Grand Finals debuts. These five are certainly among the best that the United States has to offer in Rotax competition – recording the top-three spots in the Rotax Challenge of the Americas, two in the top-five of the Florida Winter Tour point standings, earning four of the top-five results at the Cold Stone US Grand Nationals, the top two positions in the Rotax Can-Am ProKart Challenge, and a 2014 Rotax Pan American Challenge victory. 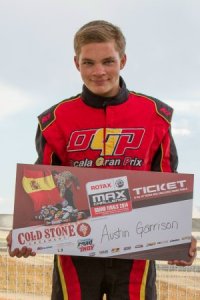 Garrison earned his ticket thanks to a solid performance at the Cold Stone US Grand Nationals for is first national championship. Austin is a second generation driver, beginning his karting career at just five-years of age. Developing as a driver under the OGP tent, Garrison has stood out in 2014, including the victory in Utah, as well as other programs in the United States.

“I’m very excited to be on Team USA. I have worked very hard to get to this point, after coming up just short two years in a row. I have already ran with the best in the U.S. and now I get to compete with the best in the world. My outlook going to the Rotax Grand Finals is to work hard and do my best, represent Team USA proudly and bring back the world title.” 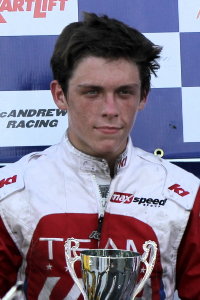 The only driver with Rotax Grand Finals experience is Ryan Norberg. Earning the spot due to a cancelation of a driver from another country, the promoter host was allowed to fill the spot with a driver, which placed Norberg in the event last year in New Orleans. Norberg was a fourth place finisher at the 2013 Rotax Grand Nationals, but saw the ticket slip away while sitting at home during the Pan Am drama that unfolded surrounding the race winner. Thankfully, Norberg accepted the ticket from the MAXSpeed Group, and never let the difficulty of the Grand Finals get to him. He kept pushing throughout the event, getting adjusted to the Energy kart only to have contact take him out while in contention to move on from the LCQ. A year later, he’s a much better driver. Working with OGP on the Rotax side of things, he finished runner-up to Garrison, coming back from a pole qualifying effort. He’s developed as a driver working with Checkered Motorsports in the United States Pro Kart Series, and took part in his first European race in October.

“I am honored to be able to represent the United States of America at the 2014 Rotax Grand Finals. It has been a dream of mine ever since I started karting five years ago. At last year’s Rotax Grand Finals, I was overwhelmed by the aggressiveness of the other drivers and it took me a while to adjust my driving style. I feel that my experience over the past year will help me be better prepared for Valencia, Spain.” 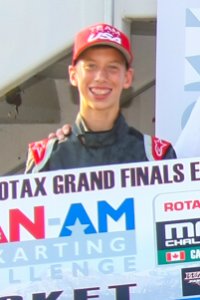 Over four years, Sting Ray Robb was a regular frontrunner in the Cadet level of national racing. This season, the Idaho native took on his first Junior season and did so with speed. He was among the quickest drivers during the Rotax Challenge of the Americas, was the Super Pole winner at the US Grand Nationals, and finished second to Austin Versteeg at the Rotax Can-Am ProKart Challenge program to earn his ticket to this year’s Rotax Grand Finals. Robb is one of a few who has had an opportunity to travel to Spain and sample the circuit where this year’s event will be held, so that could help him get up to speed quickly in November.

“I am so proud and blessed to represent the USA in Spain this November. As you know, I am in my rookie year in Junior and the youngest member of the team. My goal and hope is to represent well. With my teammates, Austin Versteeg, Austin Garrison, Ryan Norberg and Christian Brooks, (wow, what a team), I think we should help get the USA on the world karting map. The Rotax program is totally awesome and the Valencia race will be the greatest racing experience of my life. I am so excited.” 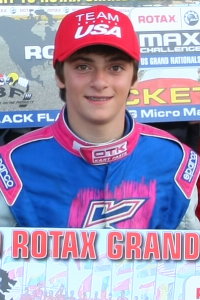 After three years of trying, Austin Versteeg is on his first Team USA squad at the Rotax Grand Finals. A longtime Mini Max driver, Versteeg continued to improve once reaching the Junior ranks and 2014 was the breakout season. He just edged out Christian Brooks for the Rotax Challenge of the Americas title, earning his ticket to the 2014 Rotax Grand Finals. Versteeg earned a second ticket at the Rotax Can-Am ProKart Challenge program, handing that down to Sting Ray Robb. An outstanding drive from last in qualifying to land third on the podium at the US Grand Nationals behind Garrison and Norberg was matched with a similar performance at the Pan American Challenge last month. Versteeg went from zero to hero, earning the victory and the first ticket in the world to the 2015 Rotax Grand Finals.

“Being on Team USA is more than just being on a team, it’s about carrying your country and its pride on your back. I look forward to the Rotax Grand Finals in Spain this year and I hope to fill Juan Manuel Correa’s shoes this year.” 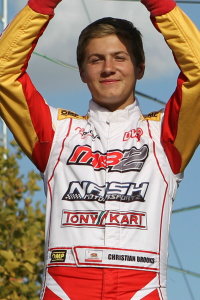 The last member to be added to the Team USA roster is Brooks. The 2011 Mini Max champion came just short of earning a spot to the Rotax Grand Finals throughout the season, finishing second to Versteeg at the Rotax Challenge of the Americas and placing fifth at the US Grand Nationals. He was in contention at the Pan American Challenge event as well, but leaving Mooresville, he was missing that golden ticket. One came, in similar fashion to that of Norberg last year. The 2013 SKUSA SuperNationals offered the first tickets to the Rotax Grand Finals in Junior Max, but the racewinner Thomas Preining earned a new ticket after winning an event with a higher ranking. This moved the ticket down the order to Brooks, the top finishing American in the field in the fifth position, so he was granted the Rotax Grand Finals ticket.

“It feels very reassuring from all the work and effort we put into the 2014 racing season to be on Team USA. I am pleased to be apart of the team and I will represent our country and racers the best I can.”