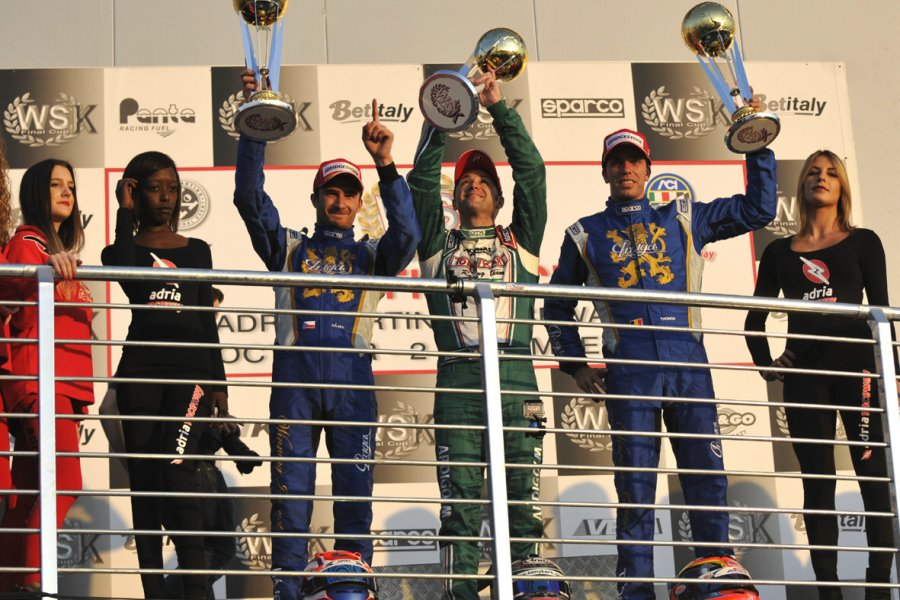 High speed and great battles were the ingredients for a perfect recipe: the WSK Final Cup, the event which inaugurated the brand new facility for karting, the Adria Karting Raceway. Spectacular overtaking manoeuvres and excellent view from the stands all along the track allowed spectators to enjoy a great racing event. The stands of the circuit were crowded by the fans of the 140 drivers and of the international teams taking part in the competition. That was a perfect scenario for the closing event of the WSK season: a race where all the drivers did their best to grab the victory, without the lingering thought of a long championship which could hold them back from pushing. 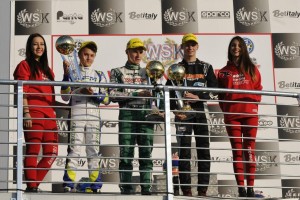 Marco Ardigò king again in KZ2
He is the new World Champion but, apparently, the title was still not enough for him: the Italian Marco Ardigò (Tony Kart-Vortex-Bridgestone) dominated throughout the whole weekend in KZ2, leaving the crumbs to his opponents. He won in the Prefinal and in the Final, leading the race from the beginning until the end, keeping his rivals at bay effortlessly. In the Prefinal, his fellow countryman and team-mate Flavio Camponeschi almost managed to keep the pace, as well as the British Jordon Lennox-Lamb (CRG-Maxter-Parilla). Camponeschi, who started from the front row in the Final, was not as fast as Ardigò, the pole-sitter, and had to deal with the attacks of the Czech Patrik Hajek and of the Belgian Jonathan Thonon (both on Praga-Parilla-Bridgestone), who had overtaken Lennox-Lamb. Eventually, the three steps of the podium were occupied by Ardigò, who can now add a new trophy to his long list of victories, Hajek and Thonon.

Karol Basz pushes and wins in KF
Nicklas Nielsen (Kosmic-Vortex-Dunlop) was the leader after yesterday’s qualifying heats, but this morning it was Max Fewtrell (FA Alonso-Vortex-Dunlop) who won hands down in the Prefinal. The English was the pole-sitter in the Final and led the race followed by a strong pack of pursuers: among them, the Dutch Martijn van Leeuwen (Zanardi-Parilla-Dunlop). He was Fewtrell’s main rival during the first laps, until the Polish Karol Basz (Tony Kart-Vortex-Dunlop), who had started from the second row, overtook him. Nielsen, in the meantime, used all his talent to close the gap after losing many positions at the start. He managed to finish fourth, behind van Leeuwen. Eventually, the winner was Basz: he finally managed to overtake Fewtrell with four laps remaining and to win the WSK Final Cup. 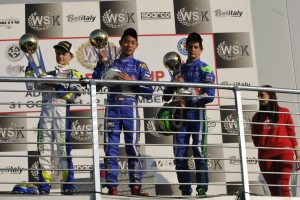 Dimitri Bogdanov is the winner of the 60 Mini
Dimitrii Bogdanov (Tony Kart-LKE-Vega) arrived in Adria from Russia eager to achieve a great performance. After a good start in the initial phase of the event, he won the Prefinal and the Final of the 60 Mini. But winning the trophy was not as easy as it might seems: his most pugnacious rival, the Italian-Canadian Antonio Serravalle (Tony Kart-LKE-Vega), surrendered only on the finishing line and had to be content with the second place. Third place for the Italian Leonardo Marseglia (Hero-LKE-Vega): he started from the fourth row and was slowed down by the tussle at the start. He recovered nine positions and scored an excellent third place.