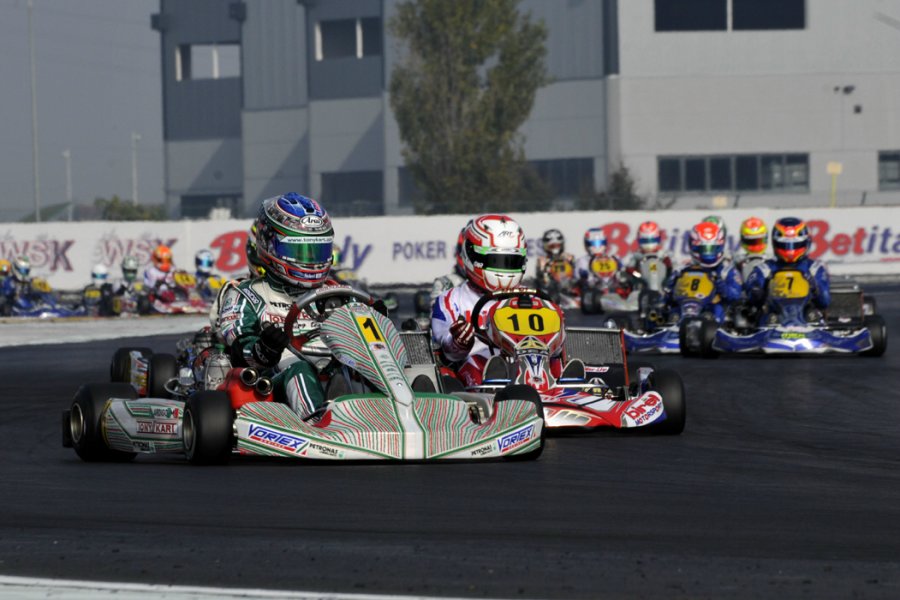 140 entrants and all eager to do their best: these are the drivers who got on track today at the Adria Karting Raceway. Their performances were spectacular and gripping but always carried out safely, thanks to the high standards of the new facility. The new circuit has got plenty of escape routes which allow drivers to duel on track in perfect safety. So, today, spectators were able to enjoy many thrilling battles during the heats, which preceded tomorrow’s Finals. After 15 heats, the starting grids for the finale are ready. The KZ2, KF, KF Junior and 60 Mini categories admitted to the race have 5 Prefinals in schedule tomorrow morning. The four Finals will take place tomorrow afternoon and, then, we will know the names of the winners of the four categories..

Marco Ardigò dominates in KZ
Marco Ardigò (Tony Kart-Vortex-Bridgestone) dominated his rivals in KZ2. He won all the duels he took part in and, as the new World Champion, he was the reference point in his three heats: the Tony Kart driver, won them all. Next to him, on the first row of the starting grid of the Prefinal, the English Jordon Lennox-Lamb (CRG-Maxter-Dunlop); then the Belgian Jonathan Thonon (Praga-Parilla-Bridgestone) and the Italian Flavio Camponeschi (Tony Kart-Vortex-Bridgestone), who always scored good placings in the heats. Focus on the possible surprises such as the Italian Mirko Torsellini (Birel-TM-Bridgestone) and the Dutch Bas Lammers (FK-Parilla-Bridgestone), who occupy the third row. 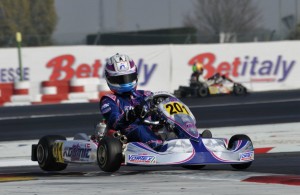 Nicklas Nielsen is the leader in KF
Nicklas Nielsen (Kosmic-Vortex-Dunlop) and Karol Basz (Tony Kart-Vortex-Dunlop) were – again – the protagonists of the heats. They will start from the front row in the Prefinal. The Danish is the pole-sitter thanks to two victories achieved preceding the Polish. In the third heat, the result saw the two drivers arriving in inverted positions, with Basz who finished ahead of Nielsen. After these results, it is really hard to guess who will win the Trophy. Second row for the English Max Fewtrell (FA Alonso-Vortex-Dunlop) and the German Hannes Janker (Zanardi-Parilla-Dunlop), who finished with a remarkable gap from the two leaders but who were more consistent than the Indian Jehan Daruvala (FA Alonso-Vortex-Dunlop) and the Ditch Martijn van Leeuwen (Zanardi-Parilla-Dunlop), who occupy the third row.

Vartanyan and Martono pole-sitters in KFJ
Intercontinental: this is the definition we can give to today’s battle in KF Junior. If we scroll the list of the drivers who occupy the first rows in the two Prefinals, we notice how there are three continents represented. Alexander Vartanyan (Tony Kart-Vortex-Vega), from Moscow, confirmed yesterday’s good performance when he set the fastest time. Today he won all the three heats he took part in: the pole position in Prefinal A is his. Juan Correa (Energy-TM-Vega), who won once,  will start next to him. Second row for the Russian Nikita Volegov (Tony Kart-Parilla-Vega) and the Chinese Sun Yue Yang (FA Alonso-Vortex-vega). In Prefinal B, the pole-sitter is the Indonesian Peter Presley Martono (Tony Kart-Vortex-Vega), who beat the Russian Artem Petrov (DR-TM-Vega) into second position, with a win each. Behind them the Venezuelan Sebastian Fernandez Wahbeh (Exprit-Vortex-Vega) and the Italian Leonardo Lorandi (Tony Kart-Vortex-Vega), who will start from the second row..

Dimitri Bogdanov, pole position in the 60 Mini
Dimitrii Bogdanov (Tony Kart-LKE-Vega) couldn’t have achieved a better result: he won both the heats he took part in and he will be the pole-sitter of the Prefinal in the 60 Mini. Dennis Hauger (Hero-LKE-Vega) won the third heat and, thanks to this success and to a third place, he will start next to Bogdanov. Second row for Muizz Gafar (Hero-LKE-Vega) and David Vidales (Energy-LKE-Vega). Giuseppe Fusco (Lenzo Kart-LKE-Vega) was unlucky: he won yesterday’s qualifying but he will start from the fifth row because he had a bad result in one of the heats.