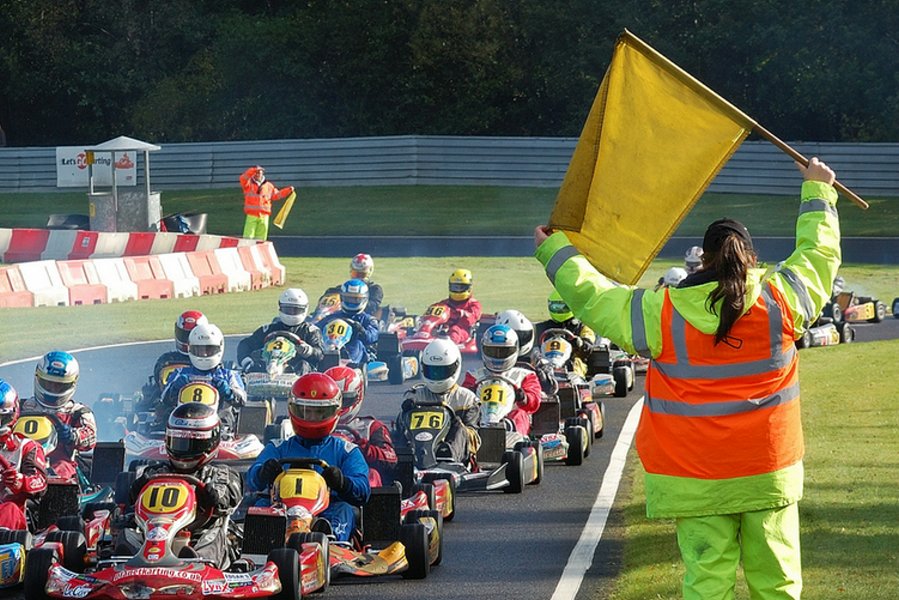 Drivers need to acknowledge the Yellow flag more in racing

I’m sure that many of our fellow EKN gearheads watched with obvious shock and sadness the extremely unfortunate accident at the Japanese Grand Prix in which F1 driver Jules Bianchi went off-track navigating the course during a torrential rainstorm that had earlier caused Adrian Sutil to leave the racing surface and make contact with the barriers. During the resulting extraction of Sutil’s damaged Sauber, Bianchi himself went off-track, but instead of finding the barriers, he made hard contact with the tractor that was removing the other F1 machine.  Bianchi endured severe blunt force trauma to his head and remains in intensive care at this time.  Sadly, contact with retrieval vehicles has occurred with fatal results in the sport of karting, and action has been taken in recent years to minimize future chances of such a catastrophe.  One of the intriguing results of this incident is the fact that the FIA announced that it would be looking to take an aggressive stance on the issue, which included propositioning the idea of yellow flag speed limits.  They understand the need to remove racecars during events to keep the show moving, so this approach to mandating speeds may be a potential solution. 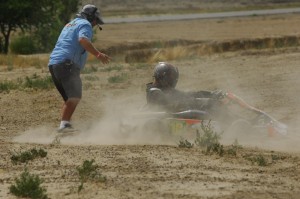 Corner workers are here for the safety of the racers and
demand our respect on and off the track (Photo: On Track Promotions – otp.ca)

Personally, I’m thrilled to read that the FIA is approaching this incident with such a direct measure, as it will put the issue of yellow flag speeds in the spotlight.  Right now, our sport of karting is dangerously close to having a Bianchi incident of our own.  We have a problem right now, an epidemic, and I believe that it needs to be addressed immediately, with swift and aggressive action.  David Cole and I attend over 40 races a year combined, and we both agree that the current approach by racers to the waving of yellow flags is downright ridiculous.  Whether it’s a Rotax event, a SKUSA national or regional, or at one of the United States Pro Kart Series that we’ve attended, we have observed drivers simply not acknowledging yellow flags and this is a HUGE issue that we believe needs to be addressed forcefully.  And by ‘not acknowledging yellow flags’, I mean drivers not lifting off the throttle in the slightest and not raising their hands to confirm the sight of the yellow and the acknowledgment of the potential danger.  We are seeing, on a regular basis, drivers absolutely blowing through waving yellow flags at full pin.  As the guy on the mic, I honestly have trouble holding my tongue.

The potential ramifications of this current mindset are real and they are scary.  Yellow flags are waved for a reason, which is to protect those involved in the incident from oncoming karts, and in the case of Bianchi, to protect those arriving at an accident scene. It’s truly a simple rule, and it’s an action that is done to protect everyone involved.  Yellow flags are thrown to signal to oncoming drivers that there is danger in the corner – one driver or more has been involved in an incident and there is the potential for danger.   I’m still at a loss of words that karters aren’t responding to, and acknowledging, this warning.  Drivers are supposed to raise their hands to signal those behind that they are about to slow down, which will allow them to assess the situation at a lesser speed, which will afford them the opportunity to avoid any carnage.

To reference the SKUSA rulebook, Rule 30.3.6.2 states this about a ‘Waving Yellow Flag’ – A yellow flag indicates that there is a problem on the course ahead. The driver is to proceed with caution and raise a hand to signal following drivers. A driver is not to pass another driver from the point that the yellow flag is being displayed until cleared of the incident. Passing on a yellow flag will result in lap penalties. 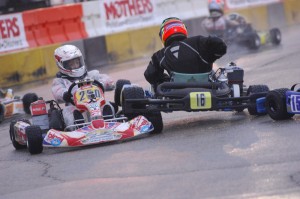 You never know what could be around the next corner,
and the yellow flag informs us of possible danger (Photo: On Track Promotions – otp.ca)

I can’t count the number of times I’ve watched TaG Cadet or Mini Max drivers this year, power through a yellow flagged corner and drive head-on into an incident.  Zero deceleration, no hand in the air, and then they drive straight into another kart on the exit of the corner.  And it’s not just the Cadet-aged drivers, it’s happened in all classes, although I’ll give the Masters drivers their due, because they’re the best of the bunch.  This might be simply because they truly comprehend the potential danger, or because they need to go to work on Monday, and it’s a very real possibility that the Masters guys are acknowledging the yellow because they don’t have a parent or a tuner yelling in their ear on the grid that they have to win practice, be the fastest on every lap, or use the yellow flags to close up on the guys who actually slow down, as per the rulebook…and as per COMMON SENSE.

So this is my question…if the kids, and young adults, are disregarding the rulebook, and common sense, who is teaching them to ignore yellow flags?  If it’s YOU, and you’re instructing your son or daughter, or the pilot you’ve been hired to tune for, coach and mentor, shame on you.  You’re doing them a disservice and, more aptly, you’re putting them in danger. Remember, that could be your son or daughter on the other side of the yellow flag, and the corners workers are out there trying to protect them, and you’re telling your driver to blow through the yellow without lifting.  Even the FIA and F1 realize how bad this is, and they’re looking at aggressive steps to eliminate this danger.

Personally, my suggestion to our race officials would be to get equally as aggressive.  Because I believe that this on-track behavior is more than likely coming from the paddock, and it needs to be penalized swiftly and harshly.  We’re so far in the other direction right now, that one or two-position penalties would be drastically ineffective.  If we truly wish to protect our racers, let’s try a 10-position penalty for the first offense, a full disqualification for the second and exclusion from the event for a third.  Over the top?  Maybe.  But when you’re the guy on the sidelines watching drivers power through accident scenes, narrowly escaping personal injury or injuring someone else, a sense of urgency is developed.   Jules Bianchi remains in ‘critical but stable’ condition in intensive care following his accident, and if things don’t change with the on-track approach to yellow flags by karters around the continent, I fear that we could be faced with our own such situation.

I expect that many may respond that I’m blowing this out of proportion.  I’ve been doing this for 20+ years now, and I firmly believe that I am not.  This is a problem, and it needs to be addressed.  It is my hope that the powers that be have a similar view, and that we take steps, just as the FIA is, to protect our racers from a horrific accident of our own.  To my fellow racers, I extend this thought and request.  When you see a waving yellow flag, understand the danger.  Lift off the throttle, quickly raise your hand to signal to the guy behind you, and prepare to take evasive action if needed.  This is not only about protecting yourself, but it’s also about respecting your fellow racers.  To blow through the corner, ignoring the warning being given to you by the dedicated corner workers on our sport, is ultimate disrespect.  And last, but certainly not least, remember this.  The guy on the other of that waving yellow could be YOU, maybe just spun, maybe in the barriers, or maybe lying in the middle of the track after being ejected from your kart.

Think quickly…what would you want the oncoming traffic to do?

The answer is easy.