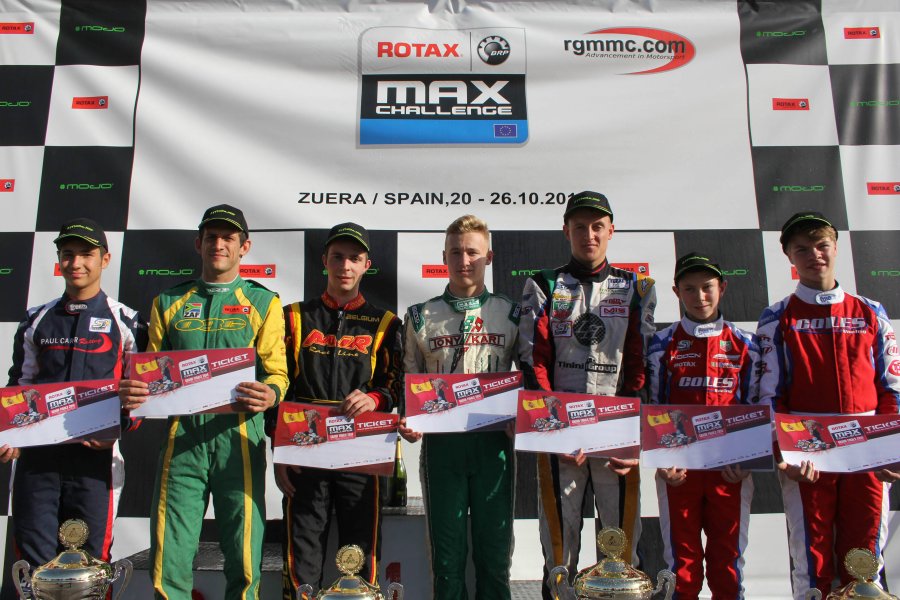 From 20st to 26th of October 2014 the ROTAX MAX International Open marked the last showdown of the year 2014 and afforded a last chance opportunity to drivers, aiming for the ROTAX MAX Grand Finals in November. After the ROTAX MAX Euro Challenge had already held its mid-season race on the Circuito Internacional de Zuera, the 1.700 metres long high-speed track in northern Spain was the scene of action for the International Open, too. The event had been limited to 34 drivers in each category (junior, senior and DD2) and was fully booked. So all told about one hundred drivers from almost 30 nations entered the event, in order to fight for the last tickets to the ROTAX MAX Grand Finals in Valencia (ES). 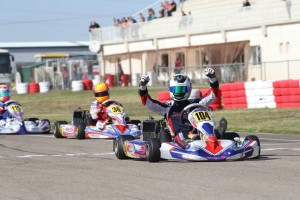 All in all there were seven last chance tickets waiting for the best drivers – two for each category plus one for the best DD2-Masters driver. Moreover the best drivers could win free and assisted places to the 2015 ROTAX MAX Winter Cup at Campillos (ES). Finally Zuera brought a cherry on the cake: All drivers were entered into a free lottery draw, where one person of each class won one complete free season in the 2015 ROTAX MAX Euro Challenge.

The Spanish weather made for best racing conditions on the 1.700 metres long high-speed track so that the spectators around the circuit and on the screens at home witnessed exciting races up to the finish flag. Finally Javier Gonzalez (juniors), Josh Price (seniors), Shaun Slavin (DD2) and Cristiano Morgado (DD2 Masters) were the worthy winners of the 2014 ROTAX MAX International Open …

Junior: Mexico’s Javier Gonzalez takes the Win
In the junior category it was local hero Lluc Ibanez (Binakart) who took the top of the pecking order in the qualifying practice. By a fastest lap time of 1:04.689 minutes he was slightly faster than Dennis Mavlanov (Zeta Corse) from Russia and Presley Martono (Aim Motorsport) from Indonesia. Darren Keane (Strawberry Racing) from Ireland and Scott Symons (KR Sport) from the UK completed the international potpourri of the top five positions of the grid, which was highly competitive with 31 drivers within only one second.

The heats showed a highly balanced competition, which came up with three different winners. The qualifying quickest Lluc Ibanez from Spain took a win while the UK guys Oliver York (Strawberry Racing) and Jack McCarthy (Strawberry Racing) shared the remaining victories. Yet Ibanez was not able to defend his top position, since he had to retire in one race, pushing him back to eighth position in the ranking. In the lead York and McCarthy ended up with equal points but finally York had the advantage of the better qualifying result. Behind the duo Presley Martono, Alex Quinn (Coles Racing) from the UK and Dennis Mavlanov completed the top five of the grid.

In the junior’s prefinal pole sitter Oliver York had quite an easy time. He did the best start and was able to head away from the rest of the grid. His win was never in danger since his following opponents had a lively fight for positions, which hindered them from keeping in touch with the leader. Up to twelve drivers struggled for the positions. In the end Jordan Brown-Nutley (Chris Rodgers Motorsport) from the UK, who had picked up the race from ninth place, finished second close ahead of Dennis Mavlanov. But the latter got a time penalty, which threw him back to a disappointing 21st place. Meanwhile New Zealand’s Marcus Armstrong (Dan Holland Racing) inherited the third place in front of Javier Gonzalez (Paul Carr Racing) from Mexico and Nicolas Schoell (Dan Holland Racing) from Austria. 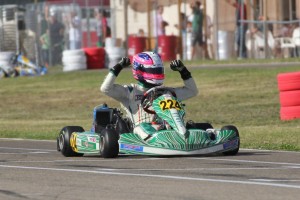 York and Brown-Nutley were the ones setting the pace in the beginning of the final although a whole pack was close on their heels. Quickly positions began to change among the top nine drivers. Unfortunately it did not go off without a hitch and so York and Brown-Nutley collided three laps before the finish, dropping back to the end of the grid, while Alex Quinn took the lead. But Javier Gonzalez was in his slipstream and overtook the leader before the last lap. With a tactical drive the man from Mexico defended the first place up to the finish line ahead of Quinn. Third place went to Presley Martono ahead of Marcus Armstrong and Julia Pankiewicz (Strawberry Racing).

Without any mistakes Josh Price was the unbeatable driver in the heats. He took the hat-trick and defended his pole position by a clean record. Strongest rival proved to be Lukasz Bartoszuk, who drove three consistent races, rewarding him with second place in the ranking. Marino Sato followed in third position ahead of Brett Ward (Aim Motorsport) from the UK and Dutchman Tom Meijer (Bouvin Power). Wiktoria Pankiewicz was without luck in the races and dropped back to twelfth position.

In the prefinal the dominating driver Josh Price suffered a setback. After the start he was not able to defend the lead and only a few metres later he was involved in a slight collision, pushing him off the track. At last he only ended up on ninth place. On top it was his teammate Jessica Backman (Strawberry Racing) who was in a brilliant shape. The lady driver from Sweden lead the race quite a long distance until she had to leave way to her rivals: Yet by Lukasz Bartoszuk it was another Strawberry Racing driver who took the lead and defended the victory closely ahead of Josh White (Coles Racing), while Max Aitken, Jessica Backman and Kyle Fowlie (Strawberry Racing) completed the top five position. But a subsequent time penalty against Bartoszuk changed the order again. The polish driver dropped back to eleventh place, while Josh White inherited the win. 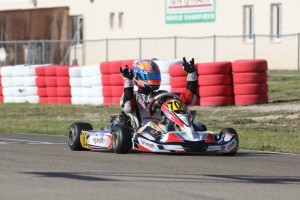 In the final race Josh White defended the leading position right after the start. But from behind it was Josh Price who boosted himself from ninth to second place. It was only a question of time until Price should take the lead. But that took longer than expected and as the race reached the halftime, Price finally had the advantage on his side. From then on the UK youngster was able to enlarge his leading gap and saw the chequered flag in first place. Behind the winner, Josh White took a secure second place, while fight for third position was an open and exciting matter: Finally Portugal’s Carlos Pinto (QZ Racing Team) asserted himself on the last podium place ahead of and Tom Meijer and Frenchman Julien Falchero (Sonic Racing Kart).

DD2: Victory for Shaun Slavin and Cristiano Morgado
In the gearbox category Andreas Backman (Strawberry Racing) tied in with his great performances during the ROTAX MAX Euro Challenge season 2014. The man from Sweden was the fastest man in the qualifying session, although his leading gap was only 0.008 seconds small. Yet this blink of an eye was enough to keep Shaun Slavin (KR Sport) from the UK and the former European champion Mathias Detige (Flandria Competition Kart) from Belgium behind. Austria’s Constantin Schoell (Dan Holland Racing) and Adam Glear (Aim Motorsport) from the UK completed the following positions.

In the heats Andreas Backman seemed to be the man to be beaten. After taking the pole position he celebrated two wins but in the last race a technical failure forced him to retire. That stain cost him the lead in the heat ranking and even worse, made him drop back to seventh position in the grid. On the top it was Shaun Slavin who took the third win. Previously he had finished second twice thus boosting himself onto the pole position for the prefinal. Behind him Filippos Kalesis (VPDR) from Greece showed a great performance: After he had picked up the race from eighth place he improved to third position in the heat ranking, putting Adam Glear and Mathias Detige into the chaser’s roles.

Shaun Slavin and Filippos Kalesis were the ones who set the pace in the prefinal. The duo quickly headed away from the grid and changed the lead several times. But towards the end it was Andreas Backman, who recovered from his moderate starting position and caught up to the leading duo. It did not take him long until he established himself in the lead again. Finally Backman took the win ahead of Kalesis, while Slavin visibly lost pace in the last laps leaving the third place to Adam Glear.

The final seemed to be a walkthrough for Andreas Backman. He managed the best start and pulled away from his chasers. His win did not seem in danger until halftime. The Tony Kart driver suddenly lost ground consistently and surprisingly had to leave way to his opponents in the last laps. Consequently it was Shaun Slavin who proved to be the fastest man on track. In the end he took the deserved victory ahead of Mathias Detige, Adam Glear, Andreas Backman and Filippos Kalesis. 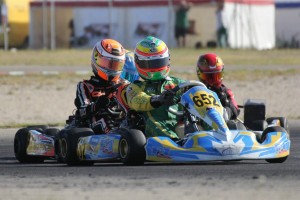 As for the DD2 Masters category, which counted nine drivers in all, it was Javier Campo (TD Kart) setting the best time on home soil. Behind the man from Spain Tamsin Germain (DG Racing) and the multiple ROTAX champion Cristiano Morgado (QZ Racing) formed the chasing duo.

After the heats the spectators witnessed a change of guard. Tamsin Germain made it up to the top, classifying eleventh in the overall grid. So she upstaged her male opponents like Cristiano Morgado as runner up and European champion Martin Pierce (Praga Racing Team) in third place. Local hero Javier Campo (TD Kart) lost ground being fifth of the Masters.

In the prefinal pole sitter Tamsin Germain had no luck. She was involved in a starting collision and lost all chances for the victory. On the other hand Cristiano Morgado did not make any mistakes, finishing 13th in the overall grid thus taking the prefinal win of the Masters. In the final race Morgado did not leave any doubt, too. He finished ninth and completed a double victory. Martin Pierce and Tamsin Germain complemented the podium during the prize giving ceremony.

By the chequered flag of the ROTAX MAX International Open the 2014 season officially ends for the organising RGMMC and its CEO Roland Geidel: “The ROTAX MAX Euro Challenge and its supporting events like the Wintercup and the International Open look back on a successful year. With a total participation of over 800 entries and an average number of 150 drivers per race event, RGMMC set new records again. We look forward to the 2015 Euro season, which course has already been set: Our opening round will be held at Salbris (FR) from 1st to 5th of April, being followed by the race at Castelletto (IT) from 27th to 31st of May. From 22nd to 26th of July we are happy to return to Wackersdorf (DE) until Genk (BE) will be host of the final round from 2nd to 6th of September. From 9th to 15th of February we will organise the traditional Wintercup at Campillos in Spain, where we hope to welcome everyone again”, says Roland Geidel, RGMMC CEO.