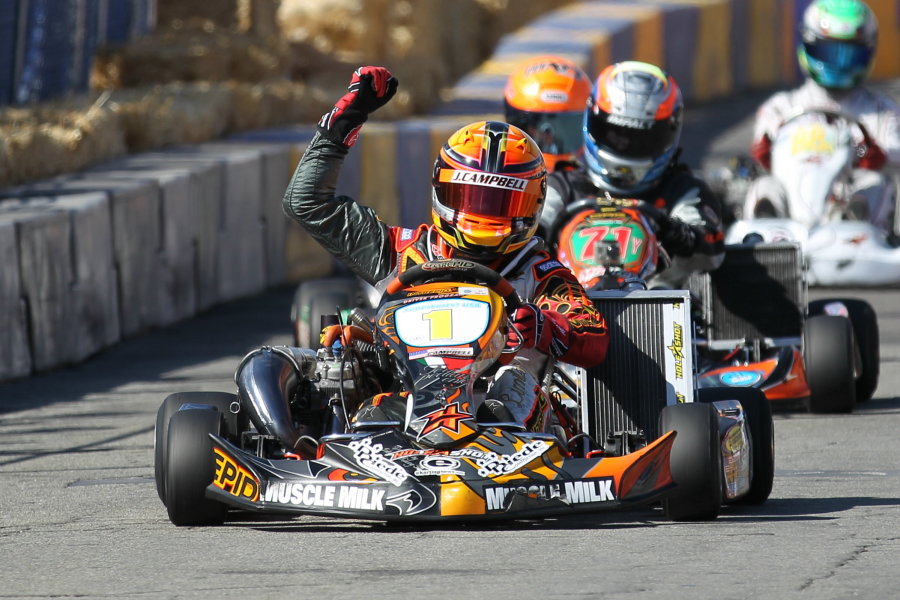 The objective of racing is to finish first. You may say to yourself that winning doesn’t matter. That time-frame, strapping on the helmet, lower yourself into the seat, feeling the power of the engine warming up, waiting to unleash, the blood through your body begins to pulse faster and faster, anticipating the green flag to wave. Winning became a regular occurrence for NorCal driver Jarred Campbell in 2013. At the Superkarts! USA Pro Tour, he claimed the S5 Junior Stock Moto championship, winning three of the five main events while placing runner-up in the other two. At the California ProKart Challenge, he went five for six, including the win at the Streets of Lancaster Grand Prix. 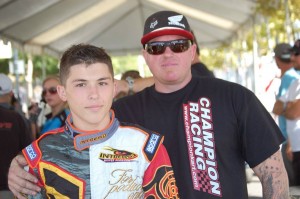 Campbell and his father Tim

This season, the soon to be 17-year old embarked on his S2 Semi-Pro rookie season. The opening California PKC round at Buttonwillow was a near sweep. He was in contention at Willow Springs and followed it up with his second win at the historic Adams Motorsports Park. The following two rounds, he gained top honors in qualifying but ran into issues at Simraceway and Lake Elsinore. The same happened on the Pro Tour, showing the way through the opening round at the Dallas Karting Complex until contact bent his axle and put him on the sidelines. The following day, he qualified on the pole position and was leading the opening heat race until his chain broke loose. Campbell bounced back in Modesto on day two, winning the Prefinal and finishing fourth.

The end of September marked one final chance to prepare for the upcoming SuperNationals and to close out the California PKC program in style. As he shown all season, Campbell possessed the speed to compete with the S1 Pro drivers. In qualifying, in the combined headline group, Jarred was fourth overall, second in S2 behind fast driver and championship leader Kolton Griffin. Heat #1, Griffin was slow off the line, allowing a group of drivers around including Campbell. Mid-way, Campbell lost the S2 lead to Griffin, placing second in class and fifth overall. The next heat, the holeshot went to Griffin but Jarred was much quicker, staying with the top two in S1 to claim the third spot on the grid for the main event.

After the front few drivers ended up in the wrong grid positions, the entire field was sent around to re-grid. Once ready, the lights went out and Campbell was slow off the line. From the grid to turn one, he fell nearly to the tail of the field, completing the first lap in the 11th position. From there, it was picking off one position at a time until he reached the fourth spot by the halfway mark. It was Billy Musgrave and Ron White fighting it out for the S1 win, with Griffin trailing. Campbell moved past Griffin for the S2 lead on lap 15, then proceeded to work by the two S1 drivers for the overall lead in the following two laps. The speed was too much, and making no mistakes, Campbell crossed the line first for the big victory. 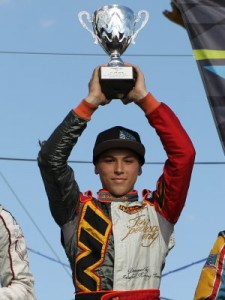 Campbell won both the S2 Semi-Pro division and the overall victory against the S1 drivers (Photo: dromophotos.com)

Chassis: Intrepid
Engine/Engine Builder: Honda CR125/SwedeTech Racing Engines
Sponsors: SwedeTech Racing Engines, Champion Intrepid Racing, Hunt and Sons Inc., Relentless Motorsports, Roseville Honda Motorsports, Diede Racing, Holeshot Drive Systems, Daniels Plumbing, Muscle Milk
Series You Compete In: SKUSA Pro Tour, California ProKart Challenge
Years In Karting: 6
How did you get started in karting? April 27, 2007 – I broke my back racing motocross, Mark Filkill was a friend of my dad’s and his son was in kart racing. By January 2008, I began karting.
What has been the high point in your racing career? Placing second in the S5 Junior Stock Moto division at the SuperNationals in 2013
What are your goals in racing? To become a professionally paid racer
In a few words, how would you describe your driving style? Aggressive and smooth
Funniest moment at the race track? Ashlie Couch hit a rabbit at PrairieCity

What do you do when not at the track? I fish and do chores
What are your goals outside of karting? become a straight A student
What type of street car do you drive? None
What type of street car would you like to drive? 66′ Nova all red with a mini tub and a 454 big block
What are your pet peeves or things that irritate you? Know-it-all’s or stuck-up’s
What do you think could be done to improve the sport of karting? More sponsors and cut the cost on everything
What are your favorite aspects about the sport of karting? The good habits it teaches you to become a great driver and how it helps guide you to a successful career