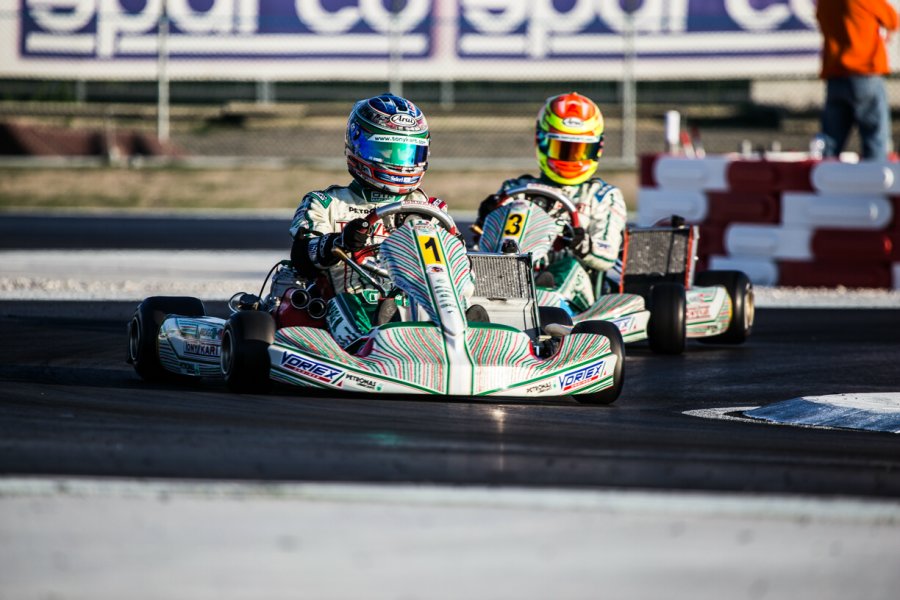 The weekend of the WSK Final Cup marks the beginning of the history of the Adria Karting Raceway, the brand new circuit just built within the facility which hosts the racetrack in the land of Polesine. From today, the town of Adria in northern Italy is in the special list of the towns home to the best kart racing circuits, thanks to its 1,300 metre long track, projected and realised by the Altoè family in order to expand the existing motorsport facility built in 2002. The WSK Final Cup is the opening event chosen for this important circuit, and it is also the event which closes the 2014 WSK Promotion season, after the recent WSK Champions Cup and the WSK Super Master Series: five events which took place on the most famous Italian circuits. The success of the WSK Promotion season has brought 140 scrutineered drivers to Adria, all eager to get on track to give the chase to the victory in the four categories admitted to the race. The KZ2, KF, KF Junior and the 60 Mini are the categories which will award the last trophies of the season on Sunday 2nd November, at the end of a weekend which has started today with free practice. This first phase of the WSK Final Cup has established the starting grids for the races of tomorrow, which will be entirely dedicated to the qualifying heats..

Marco Ardigò’s superb performance in KZ
The new World Champion Marco Ardigò (Tony Kart-Vortex-Bridgestone), who recently won the title in Sarno, showed how he deserves to be the world number one here at the Adria Karting Raceway. He set the best time in 47”508. Behind him, the rather surprising Italian Mirko Torsellini (Birel-TM-Bridgestone), only six milliseconds behind. Third position for the runner-up of the World Championship, the Italian Flavio Camponeschi. Camponeschi’s team-mate Ardigò is fourth with a very narrow gap; fifth position for another interesting talented driver of the category, the Italian Alessio Piccini (Tony Kart-Vortex-Bridgestone), who was faster than another world champion, the Belgian Jonathan Thonon (Praga-Parilla-Bridgestone).

Nicklas Nielsen attacks in KF
Nicklas Nielsen (Kosmic-Vortex-Dunlop) did not have any doubts and he was immediately clear about his intentions: the Danish driver set the best time with 48”435, just 11 milliseconds ahead of the Polish Karol Basz (Tony Kart-Vortex-Dunlop), his main rival. Interesting performance for Sasakorn Chaimongkol from Thailand: he placed third, ahead of the more experienced English   Max   Fewtrell   (both   on   FA   Alonso-Vortex-Dunlop). Chaimongkol seems to be the most insidious rival in the duel between the two top drivers. Good performances also for the Danish Andreas Jochimsen (Art GP-TM-Dunlop) and the Italian Marco Maestranzi (Top Kart-TM-Dunlop), fifth and sixth respectively.

Alexander Vartanyan has a good start in the Russian duel in KFJ
The KFJ category is characterised by an all-Russian duel: Alexander Vartanyan (Tony Kart-Vortex-Vega) from Moscow was the fastest thanks to his 49”127. Artem Petrov (DR-TM-Vega) from Saint Petersburg is, for the time being, second with a 127 millisecond gap. However, the category doesn’t seem to be only a matter between the two Russian drivers. In fact, the American Juan Correa (Energy-TM-Vega) joined the race for the trophy achieving the third position and beating into fourth the Italian Leonardo Lorandi (Tony Kart-Vortex-Vega), who remains one of the favourite drivers for the victory. There are two other Russian drivers in the leading pack: Nikita Volegov (Tony Kart-Parilla-Vega) and Gleb Zotov (Tony Kart-Vortex-Vega), fifth and sixth respectively.

Giuseppe Fusco, pulls away and grab the pole position in the 60 Mini
Giuseppe Fusco (Lenzo Kart-LKE-Vega) from Naples, the new Italian Champion, remains the leader of the 60 Mini thanks to his 56”046. At his comeback to the races in WSK, the Italian-Canadian Antonio Serravalle (Tony Kart-LKE-Vega) challenges Fusco and places second, 63 milliseconds behind him. In tomorrow’s heats, Dimitrii Bogdanov and Marzio Moretti (both on Tony Kart-LKE-Vega) are ready to make their bid for the trophy: they placed third and fourth respectively today, with very narrow gaps. Also Dennis Hauger (Hero-LKE-Vega) and the Italian Mattia Michelotto (Top Kart-Parilla-Vega), who fill the slot immediately behind, are eager to show what they are capable of.