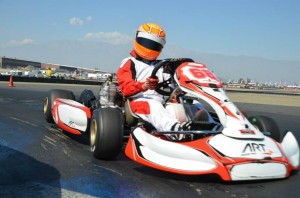 The Los Angeles Karting Championship (LAKC) proves each season why it is the premier Southern California club racing series. With large entry counts filled with some of the best karting drivers in the region, every month is an intense battle in each class. The final round of the championship came in mid-October and ART Grand Prix America, like most of the teams in the area, used the race as a final tune-up for this year’s SKUSA SuperNationals. Four drivers would battle for victories spread across three different categories.

Chance Skaufel, competing in his final event in the junior categories, would enter the race with an outside chance at the PRD Junior title. Skaufel would qualify a strong second place in the talented 21 kart field. Losing ground early in the pre-final, Skaufel would battle his way back to 4th, running laps quicker than the leaders in front of him. Making some final adjustments, confidence was high for the final to collect one last victory for the Santa Maria native. Unfortunately, a carburetor part failure on the pace laps would lead to Skaufel having to compete with reduced power. Skaufel would battle to hold on to a 4th place finish which gave him a 3rd place result in the final points tally.

Vatche Tatikian would return for his second race with the team in the TAG Masters category. After a disappointing 6th place qualifying effort, Tatikian would battle back up to 3rd place by the end of the pre-final. A loose rear bumper that broke after the checkered flag, though, would result in Tatikian having to come from the 19th and final position in the final. Not letting this ruin his day, Tatikian would be on a charge from the green flag. Running the quickest laps of the final, Tatikian would work his way back to 3rd by the end of the race just missing fast lap honors by two hundredths of a second. While the team was disappointed not to have the victory, Tatikian showed he will be a force at this year’s SKUSA Supernationals.

Aaron Aguirre would make his senior debut and be joined by veteran team driver Chris Cricca in the TAG Senior category. Using this event for development of the IAME X-30 package in conjunction with team engine partner PR Engines, Aguirre was brought in to help gather data. Aguirre would prove to everyone else that he was there for much more though, after shocking the paddock qualifying on pole in a loaded with talent 21 kart field. Aguirre would go on to lead every lap in the pre-final to set himself up with the pole starting position for the final. Cricca would be knocked back to 15th after being involved in an opening lap crash. Aguirre would lead the opening laps of the final before being in a tight duel for the position. Eventually, Aguirre would drop to 2nd where he would run comfortably for the rest of the final. It was an incredible performance for the local driver who had never been in a TAG Senior kart and hadn’t driven in over two months prior to the race. Cricca would move up from 15th to 8th by the end of the final, and with a new chassis and engine package ready for Las Vegas, Cricca will be amongst those to contend with.

The LAKC finale capped off another successful season of racing for the team with championships, wins, and podiums in a wide variety of series and classes. There are still limited spots available with the team for the largest karting race in the world, the SKUSA Supernationals. For more information on arrive-and-drive opportunities, ART Grand Prix packages, or pit space for the event with one of the most successful North American karting teams visit www.dpowerracing.com or contact artgpamerica@gmail.com and follow the team on Facebook: ART Grand Prix America.