After two days of on-track action that featured practice, qualifying and heat races, Saturday’s schedule for this year’s Rok Cup International Final at South Garda Karting kicked off with eight Prefinals to determine which drivers would make the main events in the afternoon. 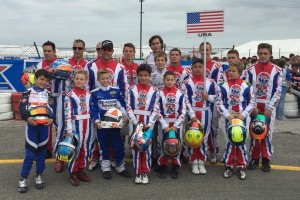 Drivers that made up Team USA at the 2014 Rok Cup International Final (Photo: Jagger Jones Racing)

MINI ROK
The Mini Rok drivers from the Rok Cup USA, Superkarts! USA and the United States Pro Kart Series were in a tough battle, with over 100 pilots in the paddock. In the first of two Prefinals, American Jagger Jones started 14th and was able to avoid the opening lap issues to advance to 11th, which would put him 22nd for the Final.  On the other side of the coin, Dylan Tavella was involved in a shunt at the start of the race and was relegated to the tail of the field. Despite trying to claw his way back, he took 25th in the final tally, putting him into the B Main, which was called the ‘Bridgestone Final’.  In the second Prefinal, both Antonio Serravalle and Lachlan DeFrancesco were fighting for positions in the top-five.  Serravalle was pushing for third, but last lap contact dropped him to fifth, while DeFrancesco advanced to eighth.  Mathias Ramirez was one of the drivers on the move, as he steadily worked forward to a strong 11th place finish that qualified him for the final, as the top-15 transferred.  Gianluca Petecof was close to making the big show, coming home in 17th, while David Morales and Colin Queen were both out early.

In the Bridgestone Final (B Main), Petecof was in the lead fight and eventually took home a well-deserved second place finish. Tavella took tenth in the 12-lap contest, while Morales attacked from the tail of the field to finish 13th.  Queen took 18th, coming from dead last.

The Mini Rok main event field was certainly stout and the race was sure to be aggressive.  In a disappointing development, Serravalle was taken out by an over-eager competitor on lap one, which put him deep in the field and eliminated what was certainly an opportunity to improve on his 11th place finish from 2013.  DeFrancesco was also included in the carnage that occurred during the opening laps, and was relegated to the back of the field.  Serravalle would recover to finish 13th, while DeFrancesco was 25th.  The driver to watch was Jones, as he was able to pick up 10 positions to take home a solid top-10 finish.  Ramirez was classified 16th in the final tally.

JUNIOR ROK
In Junior Rok, Ryan Norberg was the lead North American Junior all weekend.  The Florida pilot was in the lead pack in the second Prefinal, and jumped quickly to second on the opening lap before falling to sixth after contact.  The racing up front was very aggressive, but Norberg held his ground and crossed the start-finish line in fifth to secure a solid starting position for the main.  Olivier Bellanger was not so lucky, as he was involved in a melee and finished 23rd and out of a transfer position.  Luis Forteza found himself in a mid-pack fight for a transfer spot, and he performed well to take 13th, earning himself a place on the main event grid.  In the first Prefinal, Jacobo Camacho was also running mid-pack, finishing 15th to make sure that there would be three North American drivers in the Final.

The opening lap of all the mains can make or break a driver’s expectations, and in Junior Rok, Norberg struggled during the initial circuits, dropping 12 positions to 21st.  He fought his way back to 16th by the halfway point as he was on the move, setting the fast lap of the race on lap eight, but he was 10 seconds behind the leaders and simply could not make up any more ground.  He worked diligently to close on the next group of seven karts, and once he had caught them, he was able to steal one more spot before the checkered to take 15th in the final results.  Forteza and Camacho fought valiantly, and ended the weekend in 21st and 28th, respectively.

ROK SHIFTER
The chaos that characterized the opening laps of the main events continued in Rok Shifter, as AJ Myers did not complete the first circuit after contact midway through the lap.  It was a tough weekend for Myers, who showed the speed needed to win, but simply could not get the breaks. In stark contrast, Augie Lerch was able to not only avoid the carnage to start the final, but advance as well.  Lerch attacked quickly and grabbed eight positions from his 13th row starting position, emerging in 18th to begin the fight.  The Rok Shifter class was extremely competitive and Lerch was turning laps quicker than the leaders in the early going, and he worked to close on the next of seven cars in front of him.  In the battle for the final positions in the top-15, Lerch was able to secure one additional spot, coming under the checkered flag in 17th position overall.  Rok Cup USA Master Shifter champion Gonzalo Aponte finished 23rd overall, and fourth in the E30 class.  Fellow E30 drivers and Rok Cup USA competitors Thomas Hankinson and Daniel Miglorancia finished 26th and 28th. 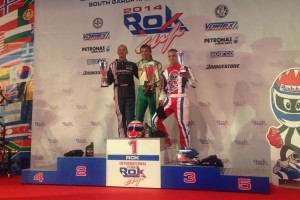 Ariel Castro on the third step of the podium in the Rok E30 category (Photo: A Castro)

SUPER ROK
It was a long weekend for Canadian Remo Ruscitti, having dealt with a technical disqualification and on-track contact that put him 30th for the Saturday morning Prefinal in Super Rok.  Ruscitti battled hard with American Dustin Stross for the final transfer position in his Prefinal and won the spot, and started the 20-lap main from 34th.  He was the only North American to make the main event.  Ruscitti was on form during the opening lap and navigated the ensuing storm, emerging in 20th after gaining a staggering 14 positions on the opening lap.  For the next 19 circuits, Remo was in the middle of a 10-kart fight for the last positions in the top-15, and after losing three spots and dropping to 20th just after the halfway point, Ruscitti settled into his groove and battled back to 17th at the checker.

SENIOR ROK
The lone Senior Rok competitor this year was Florida racer Ariel Castro, and the veteran was running in the E30 class for Masters-aged drivers.  Castro’s consistent run in the heat races put him 25th on the grid of 36 karts, and in the main, he raced hard and came home with a 21st place finish.  This placed him third overall in the E30 class and on the podium.

WRAP-UP
The Rok Cup International Final continues to gain global momentum and support, which is exciting, as Vortex does an incredible job with the event as a whole.  From the race management to the spectacular prize giving ceremony, the event is first class.  The continuing support of the Mini Rok category in North America should help elevate both the number and quality of the drivers in future editions of the race, and the growth of the Rok Cup USA program will only serve to introduce more racers to the formula and the international finale.