Texas driver performs at his best in debut with Orsolon Racing 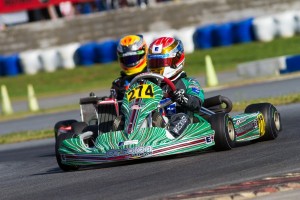 The weekend at the Cold Stone Rotax Pan American Challenge 2014 was the best of the season for young Junior Max rookie Nick Brueckner. The driver out of Texas made his debut with Orsolon Racing at the GoPro Motorplex in Mooresville, North Carolina, taking on an international field with the first Rotax Grand Finals 2015 ticket in the world up for grabs. Brueckner put himself in position for the victory, and showed the maturity and progression the 13-year old has made since January, landing on the podium with a third place result.

“It was a great weekend for me, and it was a successful first weekend with my new team Orsolon Racing,” stated Brueckner. “I was very familiar with the circuit, having raced here last year in Mini Max. The team is very professional and I felt really comfortable working with the entire crew. Every session on-track we were fast, if not the fastest.”

Brueckner grew acquainted with the Tony Kart chassis quickly, working with veteran racer/tuner Victor Pedrosa under the Orsolon tent. As he has shown all season, Nick was very quick during practice and this time transitioned that into a fourth place result in the timed session. That placed him in the Super Pole session. With only two timed laps, the team made the right changes and with no mistakes on the race course, he gained one position to start all three heat races from the inside of row two.

Nick was able to get through the opening corners of the opening heat race very well, moving past the top two qualifiers to lead the way. Brueckner led all 10 laps to score the first heat win. The second heat race was a four-driver breakaway with Nick into the second position on the opening lap. From there, the drivers remained unchanged as the Texan finished a solid second place. Heat #3 was a heated affair, as the leaders mixed it up to finish off the qualifying races. Brueckner took over the lead on lap two, but was shuffled back to fourth on lap six. The following circuit, Nick made a great move in the hairpin to advance up to second, but lost a spot on the following circuit due to contact from another driver and nearly tipped the kart over. It was a great save for Brueckner, who went on to finish the race in the third spot to earn the pole position for the Prefinal. 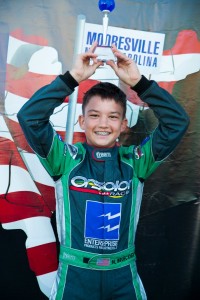 With the pole position, Brueckner had a clear view in front of him when the green flag waved. His rear bumper was full of one driver, staying locked there until the final circuit. At the hairpin, the driver moved inside of Nick, and contact was made which pushed him off course at the exit. Brueckner crossed the line in the second position, but was awarded the win after the provisional winner was penalized one spot for the contact. From the inside of row one, he avoided all the contact behind him that occurred at turn one of the Final. This gave Nick a large lead after the opening lap, as he settled in for the 22-lap event. He led the first 16 laps until two drivers were able to work together and catch Brueckner. They began fighting for the lead, all exchanging the fast lap of the race, until lap 21 when Nick was passed at turn one. He went off course and launched up and over the curb. Brueckner held on to rejoin the race in the third position, landing himself on the podium for a third straight time in his last two events.

“I really thought I had the pace to win, they were just able to catch me,” added Brueckner. “It is disappointing to not win, as we worked so hard to reach the top step of the podium and win the 2015 Rotax Grand Finals ticket. This was by far my best weekend in Junior Max competition, and we can now move forward to next year’s goal of winning a spot on Team USA. I’d like to thank the entire Orsolon Racing group and my mechanic Victor, along with all my family and friends that supported me from home.”

The next event for Brueckner will be the largest karting event in the world, as Superkarts! USA hosts the 18th annual SuperNationals in Las Vegas. Outside the Rio All-Suite Hotel and Casino, Nick will compete in the TaG Junior division, where he currently sits third in the SKUSA Pro Tour championship standings.

About Nicholas Brueckner:
Racing out of Hockley, Texas, Nicholas Brueckner is a name you will be hearing more throughout the karting ranks in the coming years. At 13 years of age, Nick has spent less than four years in the sport, and has racked up impressive results and experience. From winning the Micro Max class at the 2012 U.S Rotax Grand Nationals and Mini Max championship in the 2013 Florida Winter Tour, to racking up wins at home in the SKUSA Texas ProKart Challenge, Brueckner is climbing the ladder quickly. Nick’s talents are far from being limited to just behind the wheel, however, as he is excelling academically, earning straight-As along with showing great leadership and people skills. Supporting Nick in his racing endeavors is the Orsolon Racing, Oakley Sunglasses, Savage Design, and Rosehill Christian School.