Championships for 2014 decided after final round in Fontana 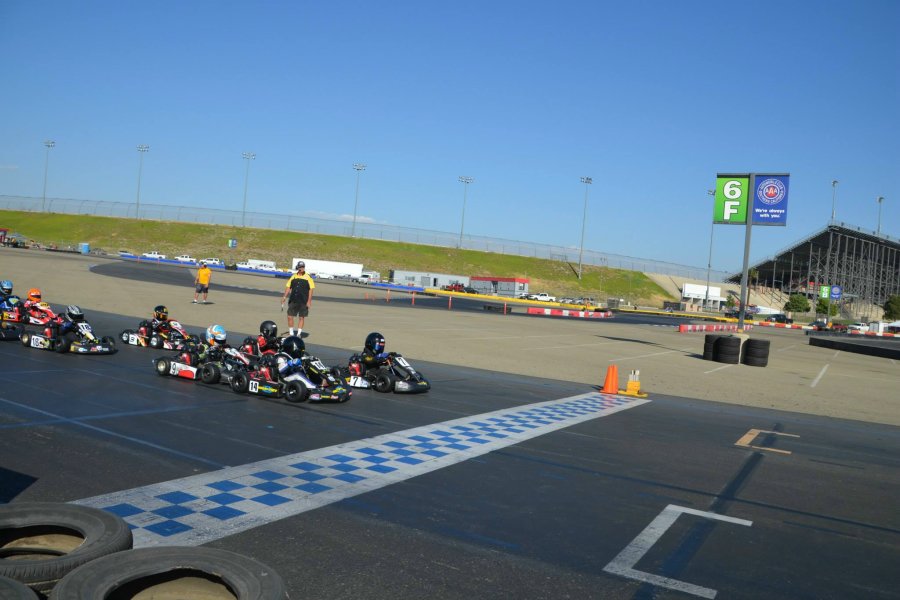 The 2014 season came to a close for the Los Angeles Karting Championship (Photo: LAKC.org) 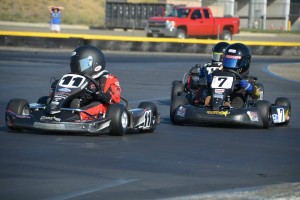 The Los Angeles Karting Championship completed the 2014 racing season with the ninth and final round of the organization’s championship on October 18-19 at the CalSpeed Karting Center in Fontana, California. Big numbers were the story all season, as many of the categories reach record highs throughout the year, with the finale reaching 200 entries. Racing was hotly contested, and drivers kept everything clean with no major incidents or stoppage of any kind during the busy day of practice, qualifying, prefinal and main event for 16 categories around the ‘Classico’ layout in the counter-clockwise direction. The event crowned the final race winners of the season, and gave racers a chance at their bid toward the year-end point championship.

The largest category on the weekend was the Mack Motorsports PRD Junior 2 class, welcoming a record 21 drivers. LAKC also welcomed back karting graduate Colton Herta, who completed his first season in the USF2000 series, part of the IndyCar Mazda Road to Indy development program. Herta raced like he had never left karting, sweeping the day. His qualifying lap was the only time recorded below the 39-second mark (38.946). He drove wire-to-wire in the Prefinal, holding off Justice Lepe and Andrew Murowatz. The main was all Herta, scoring the victory by nearly two seconds. Murowatz finished second with Lepe crossing third, only to remove himself from tech. That promoted Greg Osborne to third, ahead of Chance Skaufel and Jake Drew. 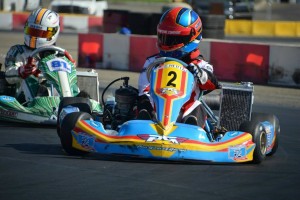 The same number of drivers competed in the Buddy Rice Karting TaG Senior class, bolstering its highest total of the season. Aaron Aguire started his debut as a Senior driver on top, posting the fast time in qualifying to edge out the likes of Carlee Taylor, Brenden Baker and a host of other strong contenders. Aguire led all 10 laps of the Prefinal, with Taylor there on the bumper at the end with Nick Ramirez up to third. Baker dropped to fifth in the race, but fought his way forward in the main event. Into the lead by lap eight, the kid out of Lancaster drove away to a one-second victory. Aguire settled for a runner-up in his first round as a LAKC Senior, while Bobby Kelley completed the podium. Ramirez finished fourth with Tyler Coffman in fifth, edging out Taylor.

A total of seven drivers completed a sweep on the day, including Mike Manning Karting PRD Senior Pilot winner KC Cook. It was the sixth main event victory of the season for Cook, who won both the Prefinal and Final by just over two-seconds. Michel Manning was second most of the day, until Luis Perez slipped by in the feature. Riley Dugan and Jacob Pope completed the top-five of the 14-driver category.

It was the sixth straight win for Paul Bonilla in the Phil Giebler Racing PRD Masters class. Bonilla edge out championship rival Mike Johnson by a scant 39 thousandths in qualifying. In the Prefinal, Bonilla drove away from the field for a two-second win but was challenge in the feature. Both Johnson and Ron Rossetti worked past the top qualifier after the opening lap. Each took a turn at the point with Johnson leading for eight laps before Bonilla returned to the point, holding on by two tenths at the checkered flag. Johnson drove to second with Brian Phillipsen into third after Rossetti retired on lap nine. Daniel Rivera and Bryan Bender rounded out the top-five. Jeff Krogstad was another Masters driver to sweep the day, showing the way in the Acceleration Kart Racing S4 Magnum Stock Moto category ahead of Nick George. 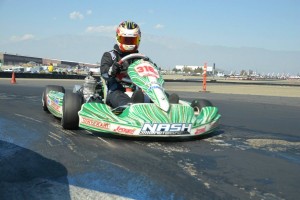 Fourteen drivers made up the Empire Karts Junior 1 Comer Pilot field, all chasing Dominic Gorden. Laying down the fast lap in qualifying, he held off Jalen Mack in the Prefinal for the race win and escaped to a two-second advantage in the feature for his third straight Final victory. Mack drove to second with Rylee Martinez third, Ryan McElwee fourth and Alexander Diakoumopoulos fifth.

The weekend was one of the final chances for the Ryan Perry Motorsports TaG Cadet competitors to prepare for the upcoming Superkarts! USA SuperNationals next month. Myles Farhan completed the 2014 LAKC season as he began it, on top. Farhan was the only driver into the 41-second lap time, earning the fast lap in qualifying. The Prefinal win went to Farhan, earning it after a 10-lap battle with Anthony Willis and Ryan Schartau early on, beating Trey Brown and Oliver Calvo to the checkered flag. The top two remained unchanged in the 18-lap Final, as Farhan kept Brown at bay the entire time to record his fifth victory of the season. Calvo finished third with Willis and Schartau making up the top-five at the checkered flag.

Another large contingent came out for the PSL SoCal TaG Masters category, reaching a season high of 19 drivers. Tony Rossetti, a winner of Round Five, set the pace early on, securing the fast time in qualifying by two tenths over Tim Meyers. He carried the speed over to the Prefinal, however, just edging out Meyers at the line by 67 thousandths. The two exchanged the lead numerous times before Meyers locked up the top spot and the victory. Rossetti settled for the runner-up position with Vatche Tatikian in third. Michael Middleton was fourth with Brian Phillipsen placing fifth. 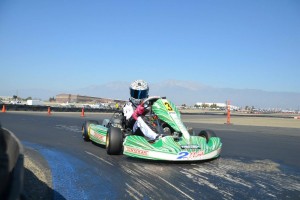 Sheldon Andrews won his first race in the Pure Karting Honda Kid Karts class. Andrews was the top qualifier of the 16-driver field, but lost the Prefinal to Chance Gibson with Nick Curry slipping past as well. The 10-lap main event was a battle to the end, with Andrews able to edge out Gibson by a slim 21 thousandths of a second. Curry ended up third with Cooper Hicks and AJ Matheson rounding out the top-five.

Shifterkart action continues to grow at the LAKC program, with the Musgrave Racing Company S4 Master Stock Moto class hosting a record number 17 drivers on the day. Troy Butts opened up the day as the fast driver in qualifying, and later was relegated back by Willy Musgrave in the Prefinal. Musgrave led early before Butts took the lead and drove off to his first victory of the season. Musgrave drove to second with Jason Chott in third. Rob Logan crossed the line in fourth, but bypassed the scales to move Howie Idelson to the spot and Terry Lawerence into fifth.

The 2Wild Karting S2 Semi-Pro Stock Moto category welcomed another first-time winner with Carter Williams securing the victory. Point leader Kolton Griffin was a start and park all day, locking up the title and allowing someone else to step up and take his place at the front. Alan Michel did so in qualifying, before Vivek Tandon took the point at the end of the Prefinal. Tandon retired on lap three of the feature, handing the point over to Michel. Williams was on the charge, taking the spot away on lap nine, leading the remaining nine circuits for the victory. Michel settled for second with Chandler Campbell in third. 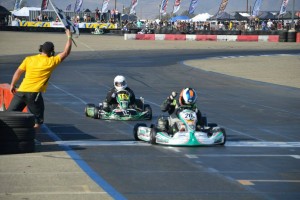 Another victory in PRD Masters was added to the total for Paul Bonilla (Photo: LAKC.org)

A familiar name returned to the seat of a kart in the TM Racing USA Open 125 Shifter class. Former shifterkart standout Alan Sciuto swept the category in his LAKC 2014 debut. Sciuto drove to a four-second advantage in the main event over Slava Prikhodko and Clinton Schoombee. Unfortunately, during post-tech inspection, safety wire items were reviewed, with Sciuto and Schoombee not compliant. They were removed from the results, moving Prikhodko to the win with Willy Axton up to second and Kris Valdez in third. Billy Musgrave ran uncontested in the 7G S1 Pro Stock Moto class, while Nicky Hays beat out Anthony Sawyer and Noah Grey in the Nash Motorsportz S5 Junior Stock Moto category

The D Power Racing PRD Senior class was won by David Vasquez. The qualifying session was close as Vasquez edge out Paul Bonilla and Nathan Seegrist by under a tenth of a second. The front of the field shuffled up with all three slipping down the order, allowing Connor Funk to score the Prefinal win over Matt Johnson. By lap five, Bonilla was into the lead during the main event. He showed the way until Vasquez returned on lap 16, holding on for the victory. Jordan Robertson fought up to second in the final laps, with Bonilla back to third. Kyle Hayner and Seegrist made up the final top-five. 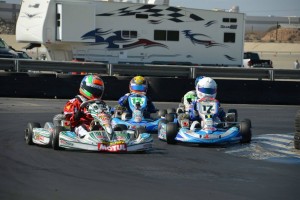 Fleming Racing Engines Junior 1 Comer point leader Ryan Schartau looked to have his third victory of the season in hand. It was a two tenths gap to the rest of the field in qualifying, however, Oliver Calvo closed it up to just 69 thousandths after 10 laps in the Prefinal. The two went back and forth for an 18-lap war that kept the fans on the fence line. It was decided with a run to the checkered flag, as Calvo edged out Schartau by just 47 thousandths of a second. Tomas Meija was third, with Joseph Daniele fourth and Myles Farhan fifth.

During the race day, PRD/USA provide a PRD engine to raffle off. The winner was Matt Magilke. The Team championship was also decided on the year, with Mack Motorsports securing the top spot, the $2,000 purse, and the perpetual Dan Wheldon Excellence Cup for one year, with last year’s winners Fleming Racing Engines relinquishing the award.

The Los Angeles Karting Championship would like to thank all of the racers, competitors, families and fans for their support during the 2014 season. Everyone will gather on December 21 at the Riverside International Automotive Museum to honor the top finishers from this year. For more information on the Los Angeles Karting Championship visit them at lakc.org, and like them on Facebook. The LAKC is also looking for some help from individuals in the karting community moving forward. Those interested can contact LAKC President Chris LaTorre by email at chris.latorre@gmail.com .