The North American and South American contingent participating at the annual Rok Cup International Final in Lonato, Italy was dealt some hot and cold results during Thursday afternoon’s qualifying sessions.  Warm sun and enjoyable mid-60s temperatures offered the racers ideal conditions, but the increasing grip levels were very challenging at the famed South Garda karting circuit.  The top qualifying performances were turned-in by the drivers in the Mini Rok class, while many of the others faced adversity or lack of overall pace, and will need to race clean yet aggressively in Friday’s heat races if they wish to qualify for the main events on Saturday. 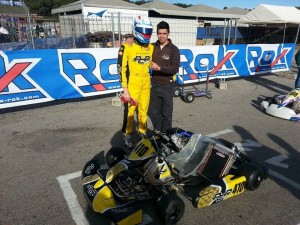 The top qualifier was Canadian Antonio Serravalle in the Mini Rok category, as he timed in fifth overall to put his name in the hunt for the overall victory. Lachlan DeFrancesco was also quick in his group, sitting second, but he was a half-second off of the time laid down by Serravalle with a 50.701.  Colin Queen was in the same group and was 13th quickest of the 24 karts on track at that time, turning a 51.145, while David Morales was 16th thanks to a quick lap of  51.185 seconds.  The final group was strong as well, with Jagger Jones leading the trio in the last outing, sitting sixth with a time of 50.823. Tavella was ninth, less than five hundredths of a second behind Jones.  Jagger’s younger brother Jace was also in the group, and he was just over two tenths back from his sibling in 13th with a 51.092.  Ricardo Villasmil was in the opening group of Mini Rok drivers, turning a 51.134 to sit 23rd in his run.

Ryan Norberg topped the North American squad in Junior Rok, setting the 13th quickest time in the opening group with a 45.416.  This would put him 21st overall, just 0.187 seconds behind polesitter Domenico Cicognini.  This class is ridiculously competitive with only four of the 66 drivers failing to time in within a second of the polesitter.  Luis Jose Forteza III was 24th on the time sheets, while Oliver Bellanger was 36th, less than four tenths off the pole time. Jacobo Camacho was 57th.

AJ Myers was the quickest of our guys in the Rok Shifter class, finishing up 12th after the timed session with a 43.244.  This lap put him just 0.219 behind the top qualifier, former Super Rok race winner Nathan Parkins of South Africa.  American Augie Lerch ended the session in 22nd, just over a half-second back, while Rok Cup USA Masters Shifter champion Gonzalo Aponte was 28th.  Aponte timed in a little over a second off the leader, but as the fourth place driver in the E30 class.  Thomas Hankinson, also running in the E30 category, was 30th overall and fifth among the E30 competitors. 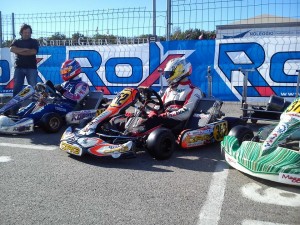 In the Super Rok class, Canadian Remo Ruscitti is the quickest of the group, but he had motor issues earlier in the day and was forced to go to a new powerplant for qualifying.  A 44.820 put him 19th in his group, and 32nd overall all in the merged results.  Ruscitti told EKN that he’s happy with how the day ended up, as it could have been much worse.  He knows that he’ll need to race wisely in the heat races to stay clean and move forward.  Jordan Redlin was drilled by an errant kart in the final practice before qualifying and logged just two laps.  After they went to work repairing his kart, the young Canadian pilot had not yet had enough time on new tires.  He elected to go out later in his qualifying group, and the action was hectic with drivers slowly on-track to find open asphalt, and Redlin found it difficult to lay down a flyer.  He was able to record a 45.081 to qualify 45th. Rok Cup USA champ Dustin Stross was 55th, Don McGregor 57th and 11th in the E30 class, Christian Potolicchio was 58th and Chris Eagles was 71st.

Ariel Castro is the American in the Senior Rok class, and is competing in the E30 class for racers over the age of 30.  Castro turned a 46.142 to sit 29th overall, just over a second behind Danilo Albanese.  Within the E30 line-up, Castro was fourth in the order.

Heat races will be run on Friday and the main events will take place on Saturday.  For session updates and results, head to the official coverage thread in the EKN Forums.