11 years-old driver from São Paulo, Brazil, guaranteed a place in the World Final after winning the traditional championship in the United States and competes for the first time in Italy this weekend 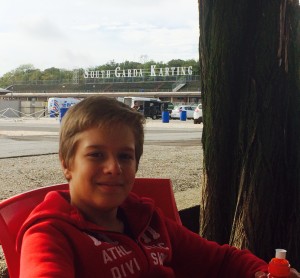 One of the main highlights of the Brazilian go-karting in recent seasons, the young Gianluca Petecof will make his debut in European competitions this weekend (October 22th to 25th), when dispute Rok Cup International Final at South Garda Karting, track located in Lonato, Italy — considered one of the meccas of karting in Europe. 11-years old driver qualified for the World Final of the Championship promoted by the Italian engines factory Vortex after being champion of the event in the United States (Rok Cup USA) and will have all his expenses paid by the organization.

Petecof’s evolution has been notorious, and he has been accumulating many titles in his career. In 2012, he raced simultaneously in two classes (Super Cadet and Cadet) in Brazil, and won five championships. In the following year, Gianluca faced the tough transition to Junior Minor class (when drivers exchange small chassis for the largest), and became champion in two major national competitions: Brazilian Championship — setting the record for the youngest driver to win in the category in 48 years — and Brazil Cup.

After occasional participations in races in the United States in previous years, Gianluca and his family decided to dedicate 2014 season for international competitions, which ended up being very successful. In the first quarter, he became champion of the Florida Winter Tour, traditional championship held in three stages, in the Rotax Mini Max class, with 4 wins and 10 podiums. Following that, he started competing in Rok Cup USA (Mini Rok class), held in five stages, winning 13 of 25 races and securing another title in his already extensive resume.

Rok Cup International Final brings together the national champions of the 20 countries where the event is held, and other places for local drivers. Mini Rok class already has 105 subscribers, being the most numerous of the event, and promises exciting battles. Last weekend, Gianluca attended a race at Lonato circuit to get used to the track and equipment you will use, and is confident in showing his potential in the competition, with the heat races on Friday and the finals on Saturday.

“Our season has been very good, I won titles in Brazil and in the United States, and I feel I have evolved a lot as a driver. I’m very happy to debut in Europe in such an important championship, something I wanted to do for some time. I know the competition will be tough and we will do our best, but the main goal is to enjoy the prize, this new experience, to meet a new environment, since we had no time to make a special preparation for the event.”