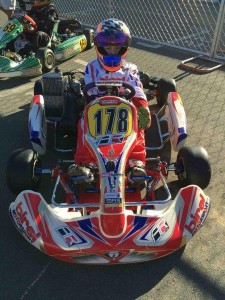 Young rising karting star Harry Coulton finished runner-up in the Micro Max category at last year’s Rotax Pan American Challenge in New Orleans. This year, the Birel driver from Florida took on another strong international field at the 2014 Cold Stone Rotax Pan American Challenge, this time in the Mini Max division. Over the October 15-19 weekend, the GoPro Motorplex in Mooresville, North Carolina was home for the 11-year old as he looked to add another notch to his young racing resume.

The rookie Mini Max season began strong at the Florida Winter Tour as Coulton finished the six-race championship third in the Mini Max standings, top among the United States drivers in the field. Harry was a consistent top-10 competitor during the Cold Stone US Grand Nationals until his engine let go in the Final. Last month, he won the inaugural Florida Pro Kart Series Mini Class championship with five wins and a runner-up result in six races.

Coulton had previously done well at the GoPro Motorplex, and felt comfortable going into the Pan Am event. He hovered around the top-10 during practice and shot up to the sixth position in qualifying, just one-tenth off the fast time. It moved him into the Super Pole session, with a two-lap shootout for the heat race pole position. Lap times were very close, however Harry remained in the sixth position, and prepared for the outside of row three in all three heat races.

Saturday began with a morning warm-up prior to the three qualifying races, where Coulton submitted the second quickest lap of the session. Harry would be unable to complete a single lap following a turn one incident that damaged his steering components. After repairs he returned to the grid for Heat #2, showing no signs of letting off the gas. Again after a difficult outside row start, Harry Coulton placed himself in the lead group of five drivers, running as high as third before placing fourth after eight laps. The third heat race nearly started as the first did, with Coulton being pushed onto the grass on turn one and dropping nearly to the rear of the field. He fought his way back up to 13th on the opening circuit. Contact again dropped Harry to mid pack but continued to fight for position at every corner, and drove back to finish ninth. 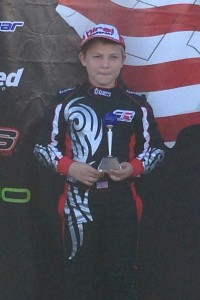 Harry Coulton celebrating on the podium for his second place result

The points gathered from the three heat races placed Harry tenth overall, which put him outside row five on the Prefinal grid. Avoiding any issues on the opening lap, Coulton moved to eighth continued moving forward. At the end of the 14-lap event, Coulton was third, just feet away from the top two drivers. The inside row two starting position was optimal for Harry, as he locked up with the front row drivers to pull away from the rest of the field. Coulton led early before settling back into third, waiting for the opportune moment. With two laps remaining, Harry tried to move into the second position at the hairpin, but could not complete the pass. On the final circuit, a pass into turn one was a success, as Coulton was just one position away from victory. Inching closer at every corner, Harry came just a few feet short at the line, earning a respectable runner-up position.

Harry would like to thank, Andersen Racing Team, MRP Motorsport/Birel America, Supertune Engines, Heartland Recreational Vehicles/Cyclone, along with his family and friends for their support in the past and throughout the 2014 season. For more information, visit www.harrycoulton.com or email info@harrycoulton.com for sponsorship opportunities.

About Harry Coulton:
A passion to excel and natural talent on his side, Harry Coulton is on his way to becoming a motorsports star. Since driving a battery-powered vehicle before his third birthday, the Florida driver jumped into competitive karting at the age of five. Since, he has been consistently climbing the ladder with success at the World Karting Association and the Florida Winter Tour. In 2012, Coulton finished third at the United States Rotax Max Challenge Grand Nationals in the Micro Max division, finishing the year #1 in the eKartingNews.com Rotax Driver Rankings through excellent results in regional programs while earning vice-champion honors at the Florida Winter Tour. The 2013 season was highlighted by a second-place finish at the Rotax Pan American Challenge event. Coulton is moving up to the Mini Max division in 2014, looking for more success and gaining more knowledge as he works up the motorsports ladder system.