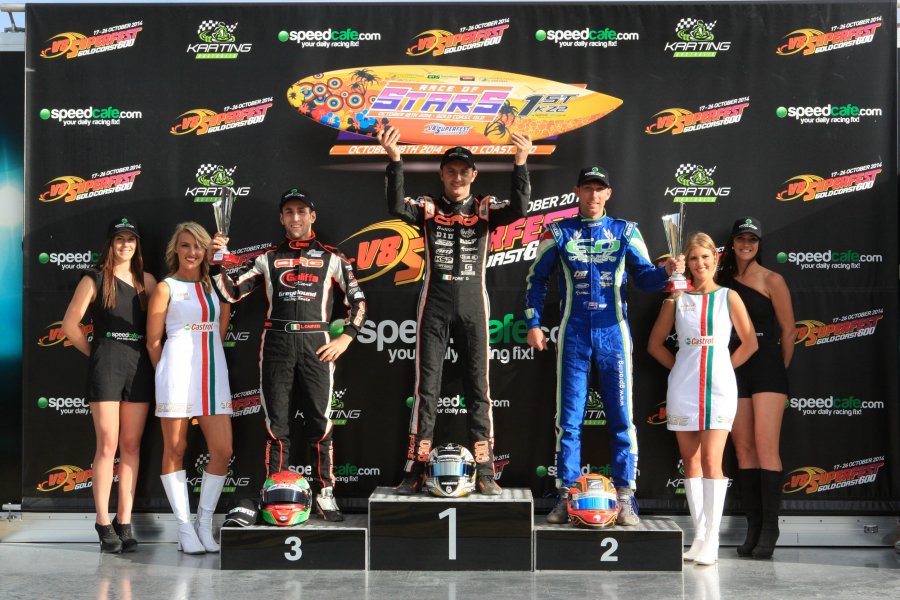 Italian Superstar Davide Forè completed a perfect day at the Race of Stars, powered by the V8 Superfest on the Gold Coast on Saturday, being undefeated aboard his CRG.

The five-time World Champion had fellow Italian, Lorenzo Camplese right with him for the early part of the final, Camplese firing his CRG into the lead on the third circulation.

Forè was all class though, charging through to take a stunning victory – while the battle for second intensified late in the race. Camplese was caught by Kiwi flyer Daniel Bray.

Bray was recovering from a DNF in the opening race and had to work his way forward. Camplese took a narrow third position ahead of four-time World Champion Jonathan Thonon. 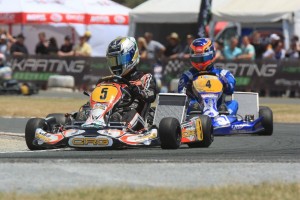 Fifth was Patrizicorse Birel Dutchman, Marijn Kremers. The first of the Australians home was last year’s winner, Gold Coaster, Chris Hays. Hays was ecstatic with his performance to come home in front of David Sera – the 17-time Australian Champion taking the fight right to the superstar Europeans for the heat races, including a stunning pass at 160kph into turn one on Simo Puhakka early in the opening heat.

“We’re very happy with the result, Team CRG worked very hard after we blew an engine in practice yesterday, so this is pleasing,” Forè said.

“We came to Australia to win and give the people a show, I think we did that.”

After qualifying the script couldn’t have been any better with arch-rivals Fore and Thonon on the front row and Aussie flyer Sera third.

In the Celebrity race, it was Ford Performance Racing’s Chaz Mostert who followed up on his recent Bathurst 1000 victory to cross the line first for the second weekend running.  Mostert fended off Lee Holdsworth for the win in what was an entertaining, and action packed affair. 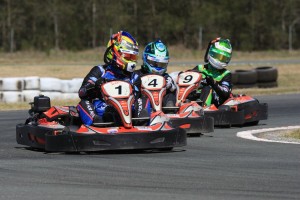 The elite Junior KF3 category saw Canberra racer, Zane Morse take a comfortable victory. After an incident yesterday that saw him have to repair his Tony Kart chassis, he drove a wheel perfect event taking all three races.

The TAG category was toughly contested with 54 of Australia’s best battling it out. Queenslander Cian Fothergill got himself back to the top step in national competition by dominating the event. He skipped away from the field to take the win.

In Junior National, Cody Brewczynski led an all New South Wales podium after a terrific race with Queenslander Jack Winter. Winter got crossed up coming onto the front straightaway for the final time and spun, leaving the door open to Scuderia PCR Australia’s Benito Montalbano to come home second and Kyle Bonser home third. 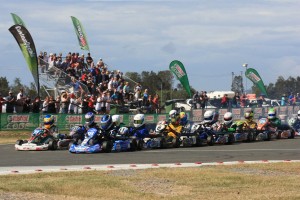 Cooper Webster and Bayley Douglas battled intensely for the Cadets victory.  The pair came together in the final turn before Douglas crossed the line first – a position that was later awarded to Webster following a post-race stewards hearing.

Overall the huge international presence at the Race of Stars, added yet another brilliant chapter to Australian karting history and positioned the event squarely on the international map.

The Race of Stars is powered by the V8 Superfest that surrounds the Castrol EDGE Gold Coast 600.  The V8 Superfest is a community events program that is an initiative of the Queensland Government, Gold Coast City Council and V8 Supercars Australia.

All of the action can be viewed on www.speedcafe.com/kartinglive/