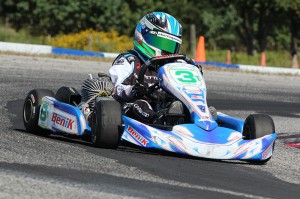 Continuing his winning ways, ‘Jetpak’ Jak Crawford claimed two regional championships two weekends ago at the Texas Pro Kart Challenge (TPKC).  In both of the highly competitive Rotax Micro Max and Vortex Mini ROK classes, Crawford dominated the regional fields over the course of the eight race weekends to take the titles and build his motorsports resume.

Running at the front of the field throughout the series, both championships, for the most part, were won in the middle rounds of racing in both Oklahoma City, Oklahoma and Denton, Texas. Owning the point in the overall championship standings, Jak took his considerable talents to the final rounds of races in Katy, Texas on October 3-4 and never looked back. Though Crawford was able to claim both series titles, the season was not without challenges for the young and up-and-coming competitor.

For the first two rounds of competition in the Vortex Mini ROK class, while Jak bested his local competitors, he faced stiff competition from a national group of racers gearing up for SuperKarts! USA (SKUSA) SpringNationals at the Dallas Karting Complex. Later in Oklahoma City for the third and fourth rounds while dominating both final heats, rain started to fall while on slick tires and Jak lost his significant leads and eventual wins in both races.  For the fifth and sixth rounds just outside of the Dallas-Fort Worth area in Denton, Texas, Jak and a fellow national-level competitor dominated the weekend and raced hard against each other while commanding the rest of the field.  Finally, at the final rounds near Houston, Texas, Jak claimed his first victory in the final race of the series, while overcoming being sent in the grass in the first turn by a fellow racer the day before and challenged back forward to claim a second place result, one lap shy of taking the lead.  Regardless, Jetpak, the young nine-year-old Mini-Rokker skillfully piloted his Benik Kart, proved his racing mettle and earned the number 1T plate for 2014 heading into the annual SKUSA SuperNatioanls in late November.

For the Rotax Max Challenge portion of the TPKC events, Jak was largely unchallenged by the 10-12 racer Micro Max fields save for one weekend in Denton, Texas when he was out-motored for the race weekend.  In the end Jetpak won six of seven events he entered, every points day and with a comfortable two race lead in the Championship points, Jak chose to sit out the final race so that new names could reach the podium.

With the hopes of capturing this second Micro Max international championship title of the year in this his Rotax debut year, Jetpak heads to the Rotax Pan American Challenge race this week at the GoPro Motorplex in Mooresville, North Carolina.