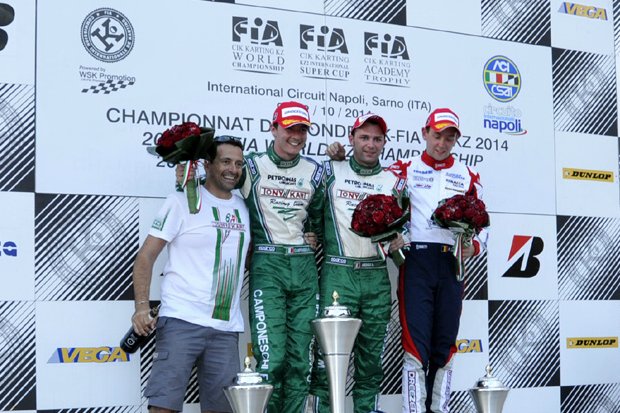 It was the right place and the right time for a great show of Motorsport. The International Circuit Napoli  fullfilled all the expectations: extraordinary races those run at the Italian facility for the final day of the World CIK-FIA KZ Championship. Besides the World Championship, there were two more events on schedule: the Final of the CIK-FIA International Super Cup KZ2 and the last round of the Karting Academy Trophy. Great celebartions for the winner of the World Championship, the Italian Marco Ardigò (Tony kart-Vortex-Bridgestone), the winner of the Super Cup KZ2, the Dutch Ryan van der Burgt (DR-TM) and the winner of the Academy Trophy, the Dutch Richard Verschoor. Their success was well deserved and they all showed great competitiveness and skills.

Marco Ardigò wins in KZ
A brand new world title for Marco Ardigò, who was able to beat a pack of strong rivals in Sarno today, just before laying his hands on the title. It is the third world title for Ardigò, the first in KZ after the two successes in KF1 in 2007 and 2008. Getting the title was not as easy as it might seem: few laps after the start he got overtaken by Paolo De Conto (Birel-TM-Bridgestone), who showed to be in great shape and kept the lead fending off Ardigò’s counterattacks. Immediately behind the two leaders, the Italian Flavio Camponeschi (Tony Kart-Vortex-Bridgestone), the Belgian Rick Dreezen (Zanardi-Parilla-Bridgestone) and the Italian Mirko Torsellini (Birel-TM-Bridgestone) were ready for the battle. They had their chance after that Ardigò took the lead of the race back: De Conto was overtaken and he lost three positions. The two Tony Kart drivers kept the leadership until the end, ahead of Dreezen in third position. The only American in the field was Gary Carlton (TB-Modena-Bridgestone), who placed 16th after creeping up to the top-10 before contact dropped him back outside the top-20 at the halfway point. 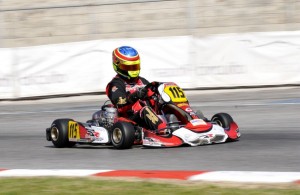 Ryan van der Burgt wins the Super Cup KZ2
The victory in the CIK-FIA International Super Cup KZ2 was a matter between the two Dutch drivers who won the two Prefinals raced this morning: Menno Paauwe (Birel-TM-Bridgestone) and Ryan van der Burgt (DR-TM-Bridgestone). Van der Burgt had a better start and took the lead leaving his main rival behind. After few laps, Lorenzo Camplese (Maranello-TM-Bridgestone), in third position, began to outpace  Paauwe, who had to give in and left the second place to the Italian. The leader controlled the rest of the race, even though Camplese finished only two tenths of a second behind. So, Van der Burgt deservedly won the Cup, with Camplese in second position and Paauwe third. Behind them, outstanding performance for the Italian Luca Tilloca (Intrepid-Modena-Bridgestone), who started from the eighth position and finished fourth ahead of the Italian Francesco Celenta (Energy-TM-Bridgestone), the Danish Andreas Hansen (Tony Kart-Vortex-Bridgestone) and the Spanish Jorge Pescador (Praga-Parilla-Bridgestone). The Spaniard, during the qualifying session, seemed the driver with the best chance to win the Cup. 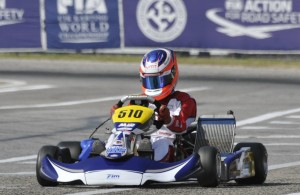 Verschoor wins the race and the Academy Trophy
He made his bid for the victory after scoring the second place in the Prefinal and after dominating the qualifying session but not the heats: Richard Verschoor  took the lead in the Final in the last round of Karting Academy Trophy winning, during the first laps, the duel against the Turkish  Berkay Besler, his main rival. Verschoor kept the head of the race until the end, while Besler could not resist the Spanish  Xavier Lloveras recovery. The Spaniard started from the seventh position and, little by little, managed to close the gap and scored the second position, just ahead of the Turkish. Thanks to this victory in Sarno, Verschoor conquered the Academy Trophy.