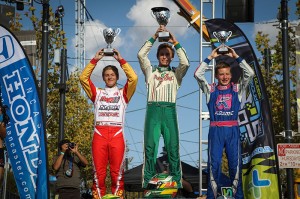 P1 Engines were the equipment to have this past weekend at the Streets of Lancaster Grand Prix in Lancaster, California. Drivers who had a P1 engine powering their chassis definitely had a leg up in Superkarts! USA’s (SKUSA) sixth round of the ProKart Challenge on the challenging street track. These drivers not only had great finishes, but the weekend also turned over championships in TaG Senior as well as TaG Junior, for Austin Elliott and Christian Brooks, respectively.

For the duration of the weekend, the front of the pack in TaG Junior was dominated by P1 drivers Royal McKee, Christian Brooks, and Justice Lepe. After all drivers qualified in the top-ten, Brooks finished first in heat one, with McKee and Lepe right behind him in second and third. Lepe finished second in heat two; however a racing incident in the final resulted in a DNF after having a great run. Brooks pulled another first in heat two; however McKee had had enough of scarcely missing the win throughout the heats and pulled out a win in the main. Even though Brooks finished second in the main, his finessed speed both from talent and his P1 engine, as well smart decisions throughout the season prevailed, as this finish awarded him the title of ProKart TaG Junior Champion.

TaG Senior’s Andrick Zeen qualified his P1 engine in the third position, improved to second in heat one, then fought to finish third in heat two. He regrouped after leading on and off all weekend and finished in second. Austin Elliott’s weekend started off with an uncharacteristic qualifying finish in 11th position. Focused on improving, he moved up throughout the heats, eventually to sixth in heat two. Getting a podium with his P1 engine was non-negotiable for Elliott, and even after some struggles, he finished fourth. This left the TaG Senior driver not only clutching a Lancaster trophy but also the ProKart TaG Senior Championship for the second time. P1 would also like to extend their congratulations to Elliott for winning the Lancaster Award.

TaG Cadet held some talent of its own with Tomas Mejia running in second all weekend, only to cross the finish line in the main in the first position. As excited as he, and P1 Engines, were for his victory, Mejia was accused of jumped the start, and was pushed back one position in the official results. Cadet driver Oliver Calvo ran in P4 all weekend; however contact in the main pushed him back to finish tenth. Dante Yu qualified 11th, and after figuring some issues out, moved to sixth in the heats, prepping him to be able to finish in fifth position for a podium in the main. Ryan Schatau, also running P1 Engines power, struggled through the heats, but found his lines and managed to race in the top-three in the main for some time, until a throttle cable failed him and ended his Lancaster race.

Throughout the wins and struggles of the weekend, P1 Engines wishes to express their encouragement and congratulations to all of the drivers who ran their engines and showed great speed and talent throughout the weekend at the Streets of Lancaster Grand Prix. They would also like to congratulate Austin Elliott and Christian Brooks for their SKUSA ProKart Challenge TaG Championships, as well as Royal McKee for such a successful season. P1 Engines can’t wait to see what their participating drivers will do next month at the SKUSA SuperNationals.