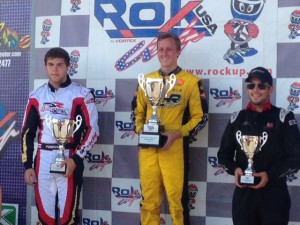 As the 2014 karting season comes to a close, Florida resident and PCR pilot AJ Myers continues to add to his resume of success. Claiming multiple race wins and championships throughout the season, the talented driver is now set to take on the world. Contesting in the Rok International Final in Italy in late October, Myers will then jet set his way across the world to the SuperKarts! USA (SKUSA) SuperNationals in Las Vegas, Nevada to compete in the biggest karting event in the world.

“It has been a great season to date but I am not slowing down until the final checkered flag in Las Vegas,” explained AJ Myers. “Making the switch to the PCR chassis was a beneficial for me as it suits my driving style and is easily tunable. I am looking to continue the success for the rest of the year and onwards into the 2015 season.”

The 2014 season has been a good one for the Checkered Motorsports PCR driver as the duo has found success in several series. Claiming the United States Pro Kart Series (USPKS) Leopard Pro championship on the strength of several national level victories across the United States, Myers also showed speed in the six-speed gearbox categories. Trading his Leopard powered TaG chassis in for a PCR shifter chassis, Myers went on to add more victories to his 2014 total by claiming the Rok Cup USA Rok Shifter title and the inaugural Florida Pro Kart Series (FPKS) championship in the 125cc shifter class.

Myers added, “I really enjoy both the TaG and Shifter competition and working with the Checkered Motorsports team and the PCR chassis, they have made the year a successful one.”

Two more events remain on the 2014 calendar for Myers. The first will take place at the South Garda Karting Circuit in South Garda, Italy as he will travel to Europe to compete in the Rok International Final. Part of the Team USA program, Myers will see action in the Rok Shifter division. November will see the Floridian travel to ‘Sin City’ to do battle in the talent-filled TaG Senior field. With more than eighty drivers registered, Myers relishes the opportunity to battle wheel-to-wheel with some of the world’s most talented drivers.

AJ Myers would like to thank Checkered Motorsports, PCR Chassis and Performance Motorsports for their continued support.

For more information on AJ Myers racing program and services offered by Performance Motorsports, please contact Mike Myers at 727.647.8870 or via e-mail to realrace5@gmail.com.