Ryan Shattuck and Dan Kranefuss were crowned the Fall Rental League Powered by Sunoco Race Fuels Champions tonight following Round 5, the series finale for the five-week series. As the last of three rental leagues this season, their championship reigns will go unchallenged until the 2015 season. 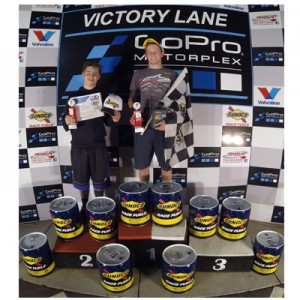 Over $1,000 in championship prizes were awarded to the champions and top-three finishers in the Light and Heavy divisions during a special ceremony following the racing action this evening. Championship prizes included GoPro® HERO3 Black Edition cameras, a track test day in an Arrow Briggs LO206 racing kart and $100 Sunoco Gas Station Gift Cards!

Light Division
With a dominant run, Ryan Shattuck was crowned the Light Division Fall Rental League Champion with 2,115 points. However, the championship battle for second was so close that it required two tie-breakers. Coty Hartson and Devin Jones were tied with 1,760 points and with two race wins (…Read More)

Briggs LO206 Heavy Division
With three entries in the Briggs LO206 Heavy division, the drivers still managed to put on a great race for the win! Two drivers, Ryan Shattuck and Matt Holden, were competing for the first time in their newly purchased Briggs-powered karts. Shattuck was actually able to secure the 12-lap final win over Justin Neu. Shattuck and Neu delivered incredibly clean passes back and forth for the lead almost the entire race. A huge thank you to all of the Briggs division drivers who have joined us as we continue to grow this class! 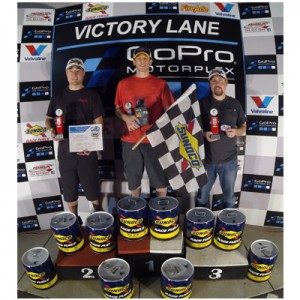 GoPro Photo Gallery –
To view the full album of GoPro pictures from Round 5 tonight, CLICK HERE. (Scroll to bottom of page for most recent photos.)

Thank You Competitors and Sunoco Race Fuels!
As tonight completes our 2014 Rental League season, we can’t thank all of our competitors enough, whether entering one round or the entire series, it is YOUR entries that make our leagues a success. A huge thank you as well to Sunoco Race Fuels, their continued sponsorship of all three of our leagues has allowed us to award competitors with unmatched round prizes and over $1,000 in championship prizes!

About Proud Sponsor, Sunoco Race Fuels:
As the largest manufacturer of racing gasolines in the world, Sunoco has a 40-year track record of winning performances. To learn more about Sunoco Race Fuels, CLICK HERE.