From the Tower: 2014 Streets of Lancaster Grand Prix

Karting ‘Showtime’ on display in city just north of Hollywood 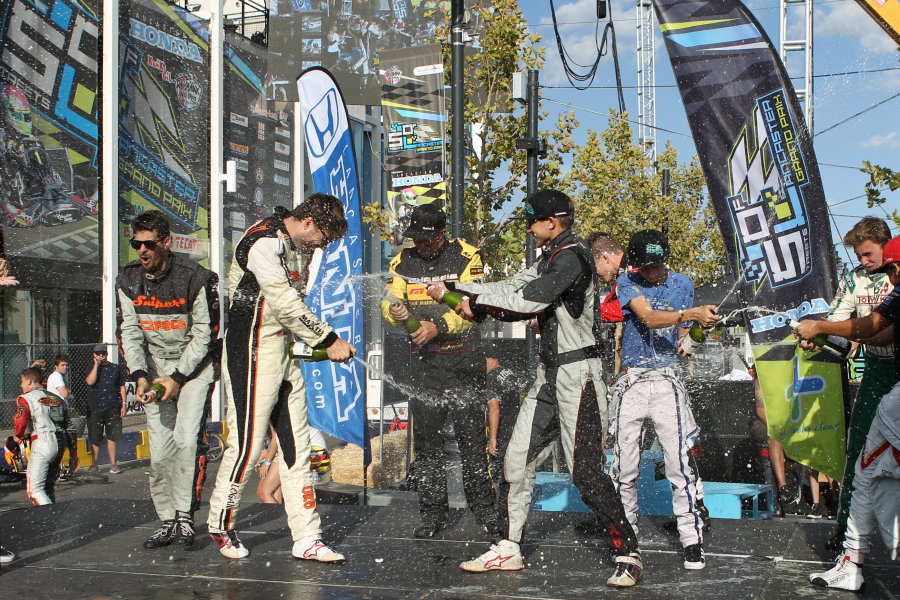 The sixth annual Streets of Lancaster Grand Prix is the fourth street race of the 2014 eKartingNews.com Trackside Live program. Each have its own uniqueness and strengths, with this our fourth time in the Southern California city. A limited race schedule for competitors, the track area stays busy for three days with the city of Lancaster making it a must-attend. 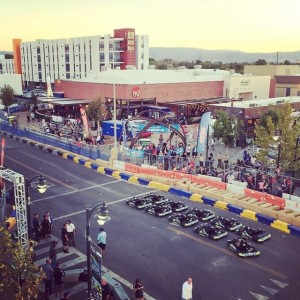 Welcome My Friends to the Show that Never Ends
This year at the Streets of Lancaster Grand Prix was the fourth straight that Superkarts! USA and the California ProKart Challenge have been a part of the three-day festival. On and off the track, the downtown Lancaster area comes alive as the ‘BLVD’ hosts racers and fans from all over the west coast. What makes the Lancaster street race different from any other across the country is how much the city is behind the event. City officials are the backbone to making the event come together, and help bring in a number of major supporters to make the event go each year. One aspect that helps bring in a lot of the attention to the street race are the special VIP races Friday and Saturday night. City dignitaries, sponsors, and many others get a chance to feel what it is like to race, competing in the SKUSA rental kart fleet around the same circuit as the Streets of Lancaster GP competitors. Add in the voice of EKN’s Rob Howden and racing under the lights, and you have a show that is fun and exciting for everyone. 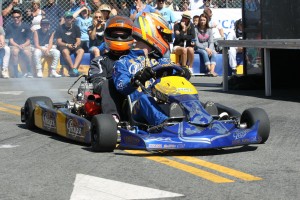 Two-Seat Two-Step
One of the biggest thrills of the weekend by a hand-selected few was the chance to get behind Jacob Neal. The former karting champion piloted the Praga two-seater chassis, powered by an IAME X30 Super Shifter engine. A number of VIPs were able to reach speeds just over 70mph down the 1000 foot straight, and take the turns at 2 or 3 Gs. This type of ride allows those not familiar with the sport to get that adrenaline rush we as karters get every time we strap on the helmet. It’s like a roller coaster ride, that every track in the United States could provide for a $10 or $15 charge for five minutes of fun. 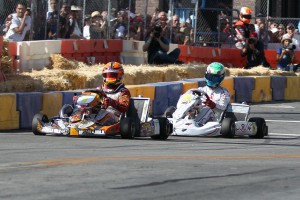 Young Guns Earn Their Keep
Throughout the season, the S1 Pro and S2 Semi-Pro Stock Moto categories compete together on the track at the same time. This allows the S2 drivers the ability to measure themselves up to the S1 Pros in real time. For much of 2014, the S2 drivers have shown the ability to produce faster lap times, and also lead the overall field. This was evident in Lancaster with S2 drivers Jarred Campbell and Kolton Griffin mixing it up with the top S1 drivers. Griffin was the top qualifier in the combined session, as he and Campbell – a rookie in the S2 division after scoring the Pro Tour S5 Junior title last year – kept the pace with the S1 standouts through the heat races. After Campbell nearly stalled on the start, he fought his way back up to the leaders. Both he and Griffin fought with the top S1 drivers Ron White and Billy Musgrave, for the overall win. Campbell kept everything together, earning the big victory while Griffin was fourth overall.

On the flip side, it was the ‘veterans’ coming out on top. Earning the win in TaG Senior was defending race winner Chris Cricca as he was able to escape the battle for second. Andrick Zeen was seeking a drafting partner, but neither the young rookies Brendan Baker nor Nathan Seegrist wanted to play wingman. Zeen would win the battle for second however, as the TaG Senior category continues to put experience against enthusiasm. 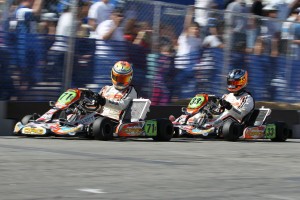 Friends and Rivals
The Master category was created for the ‘working person’. It’s a category to go and not have to worry about the up-and-coming Michael Schumacher wanna-be, driving over you and destroying your kart, and possible your body, for that 15th place position. Time and time again we see great racing in the S4 and TaG Master divisions, with drivers respecting one another. Both races in Lancaster were a duel for the victory. S4 featured CRG drivers Darren Elliott and Rob Logan. Elliott, a former SKUSA standout during its early years, basically had the California PKC championship in hand with Logan, and regular contender in the S4 division, his lead challenger. The two went back and forth for the lead for all of the 20 laps, with Logan able to hold off a final attempt from Elliott to score his first victory of the season. Both will be in contention for the SuperNationals win in Las Vegas.

TaG Master put the championship contenders head-to-head, with Ethan Wilson looking to lock up the title over Kevin Manning. Manning took the win in Heat #1 with Wilson taking the checkered flag in Heat #2, making the main event that much more important. Wilson led the 20-lap event early on, with Manning putting on the pressure. Lap after lap, Manning tried to move past Wilson for the lead, but came up short. Finally, on the last circuit, Manning pulled the trigger and got the job done to earn his first win of the season. Wilson won the war, earning the unofficial championship by just a few points. 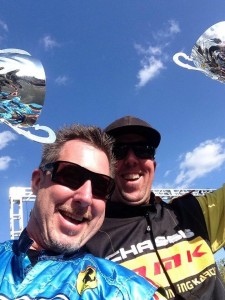 Crowd Favorite
There can be nothing like racing in front of a crowd. During high school years, football and basketball games were even more exciting when the crowd was 100% behind the team. The spectators in Lancaster gave the event that extra element. With cameras giving the ability for everyone at the turn five section, hundreds of fans could watch nearly every bit of every lap. The ‘ooohs’ and ‘ahhhs’ along with the cheering at the checkered flag gave me goosebumps, and I was not even racing. Each time the winner returned to the area for their post-race interview, and even staying to the end for the podium ceremonies, the crowd in Lancaster showed the drivers a lot of respect and appreciated the show put on. Just listen to their reactions during the driver interviews below.