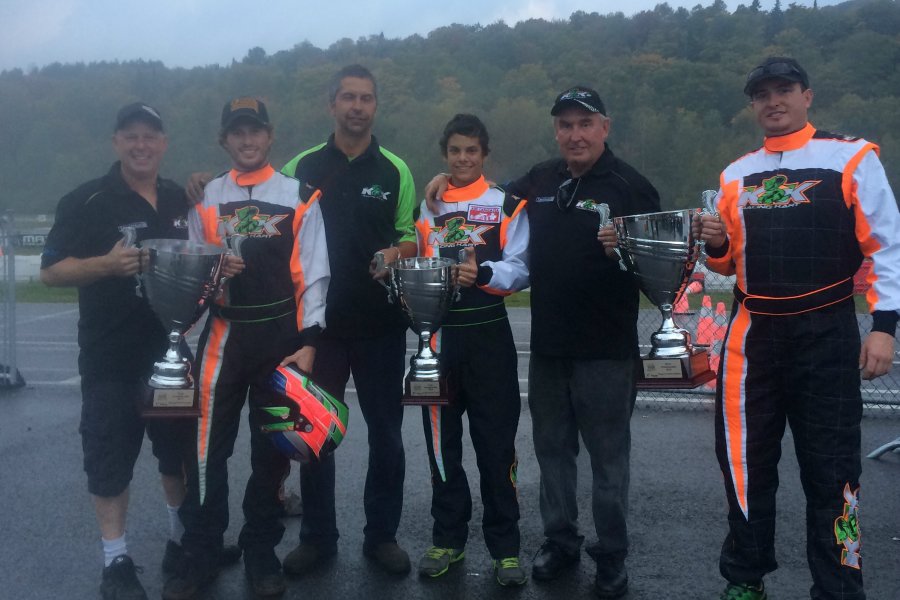 Team K&K, with it’s small contingent of drivers, had a specific goal for 2014. Win All 3 Briggs LO206 Classes at ECKC. The K&K Team won 2 of 3 ECKC Briggs classes in 2013, but did not contest a full season of Masters in 2013. Winning 2 of 3 ECKC Briggs LO206 Championships and 2nd in Briggs Junior was no easy feat. The ECKC is consdered the Premier Karting Series in Canada and has the largest fields, World Class drivers and the largest shops/teams competing. For K&K to have these phenomenal results at ECKC took dedication, hard work, a little luck and perseverance by everyone involved with Team K&K.

JON TREADWELL  K&K #766 – 2014 ECKC BRIGGS SENIOR CHAMPION
Jon successfully defended his ECKC title from 2013, in the headline Briggs Senior class with major challenges from some of the best Teams and Drivers in Canada, as well as consistent fields of 25+.  Jon started the year early with 3 wins, but bad luck at Trois Rivieres saw veteran Mike Glaze challenge to the end. Jon played it smart in the final event at Mt. Tremblant in very inclement weather and got the results he needed to clinch the ECKC Senior Briggs Championship.

KEITH BARRICK  K&K #841 – 2014 ECKC BRIGGS MASTERS CHAMPION
Keith came out of retirement mid season last year and had a BSRKC Bear win, some ECKC event wins and was ASN National Vice Champion in 2013. 2014 was to be Keith’s swan song year, as he is retiring again, getting married and looking towards kid’s of his own. His goal this year was to win the ECKC Briggs Masters Championship, which he did in commanding style over large fields.. He too played it smart at Mt. Tremblant, with 2nd and 3rd place finishes. He actually clinched the title prior to the last race on Sunday. Money is down though, that we will see him at the 2015 ASN Nationals.

ANDRE FIORINI  K&K #676 – 2014 ECKC BRIGGS JUNIOR VICE – CHAMPION
Andre, in what was one of the closest and most hotly contested Briggs classes in the ECKC, stood tall until the very last race for the Championship. Andre was a mere 30 points out of the Championship points lead, after a 2nd place finish on Saturday. Sunday brought an on track incident in the prefinal, which affected his starting position in the final. That, coupled with the extreme rain conditions, relegated Andre to his Vice – Championship standing. Andre reflects on a lapped kart at Trois Rivieres, that took him out of the lead with 1 corner to go. “That win would have definitely made a difference in me winning the ECKC Briggs Junior Championship, Fiorini laments. The 2013 ECKC Junior Championship was won by K&K Team driver Jordan Latimer.

Team owner and K&K importer, Kevin Barrick would like to thank firstly, the whole Treadwell family (VRS/Venom Racing Solutions). James and Laurie who tirelessly contributed with tuning/setup/transportation/hospitality and just incredible support for the whole team. “This just would not have happened without them”, Barrick adds.

Secondly, thanks to all the drivers that raced a K&K Cobra in 2014 events and contributed to a great year. They are Kyle Aulenback, Jared Vegter, Steve MacVoy, Zach & Jordan Latimer, Marc Stehle, Gary Klutt, Braxton Terry, Keidon and Martie Fletcher and Kevin May. Also, thanks to all the families /mechanics for their support, and in particular Jason Aulenback who helped everyone and was a joy to have around.

Thirdly, thanks go out to Kelly Michaud(DMR), Maurice Bachand (MSM) for Briggs engine support, and of course Dave Conquer (Dominator) for keeping our karts straight over the course of the year.