Talented youngster to make the switch to BENIK Kart 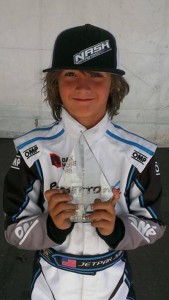 Jetpak Jak is set to join BENIK Kart for the remainder of the 2014 and upcoming 2015 racing season (Photo: Jak Crawford Racing)

North America’s dominant 2014 Rotaxian in the Rotax Micro Max category has teamedup for the remainder of 2014 and into 2015 with North America’s emerging dominant karting brand, BENIK Kart.  Since his first test drive during the Cold Stone US Grand Nationals week at the Miller Motorsports Park in Tooele, Utah, Jetpak Jak Crawford has been fast on the BENIK chassis.

“The very first time Jak tested a BENIK Kart he ran it within a tenth of a second of his other chassis even though it wasn’t set up for him,” explained Seth Nash, Jak’s chassis engineer and consultant.  “It proved the BENIK Kart was a real weapon that we should put in Jak’s hands.”

After much deliberation and recently racing with the BENIK Kart Team in a Rok Cup USA event in Orlando, Jak’s team decided to make the permanent move to BENIK Kart.

“In Orlando, Jak showed exceptional speed on our BENIK Missile chassis and if not for a tuning snafu in the qualifying effort, we are certain Jak could have easily placed in the top five in the main event,” explained Nick Mitchell, co-founder of BENIK Kart.

“Seth made a smart move adding the BENIK Kart line and his early adaptation to the brand will allow Jak to continue to run with one of the best karting operations in the world, Nash Motorsportz,” says Jak’s Father, Tim Crawford.

Jak has found tremendous success teaming with the Nash Motorsportz and Precisionworks Racing Engines tandem in 2014 for his Rotax racing debut.

Chris Freckleton, who runs Precisionworks Racing Engines, is also Jetpak’s championship winning tuner. “Jak will continue to be a featured Nash Motorsportz driver into 2015 but we will be running some East Coast races with the BENIK Kart team,” continued Crawford who also went on to say, “We are happy Jak’s karting worlds merged together in one big, happy BENIK/Nash family.”

With three Rotax races left on his 2014 schedule, Jetpak Jak has won nineteen international or Rotax Max Challenge Micro Max races so far in his 2014 Rotax debut year.  Four other Micro Max races were firmly in his grasp in 2014 but circumstances would not allow victory.  In addition to winning Rotax’s prestigious Challenge of Americas championship, Jetpak is currently and decisively leading two regional-level championships that will be decided this week at the Texas Pro Kart Challenge outside of Houston, Texas where Jak will compete on his BENIK Kart chassis.  Jak, the racy-beyond-his-years nine-year old, looks to end the week with the #1t SuperKarts USA (SKUSA) number plate heading into the SuperNationals event in Las Vegas, Nevada this November.

For more information on ‘Jetpak’ Jak, or to place sponsorship or calendar inquiries, please contact Nikki Crawford at nikocraw@gmail.com. Also, be sure to like ‘Jetpak’ Jak Crawford on his new Facebook page at www.facebook.com/jetpakjakcrawford.