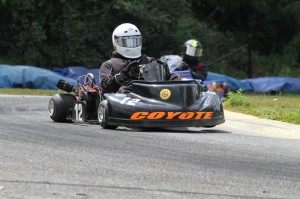 With the first three rounds of the 2014 World Karting Association Gold Cup Series in the rearview, Coyote Motorsports is preparing for this year’s Gold Cup season closer October 17-19 at Carolina Motorsports Park in Kershaw, S.C.

The Kershaw event, which serves as the annual Gold Cup “Grand Nationals,” is primed to be one of the biggest national 4-cycle sprint karting events of the year. Teams from across the eastern half of the country will meet and compete on CMP’s challenging 0.7-mile sprint course, which has hosted WKA national events annually since 2010.

“Carolina Motorsports Park has a great sprint track,” Coyote owner Jim Lipari said. “The Gold Cup was actually the first series to race on CMP’s sprint track a few years ago. It’s nice WKA has brought the series back to Kershaw and I think nearly everyone enjoys racing there, especially in October when it’s usually nice weather down there.”

Many of the teams that travel to Kershaw will be ready to field their potent Coyote chassis. Coyote racers will enter Sportsman, Junior and Senior divisions ready to compete for Grand National race wins and for some, national championships.

Lipari is one of those drivers with a good shot at a national title, and he and Blake Boon certainly helped their national championship goals in August at the Gold Cup Nationals at Michiana Raceway Park in Indiana, where the youngster Boon won both LO206 Kid Kart feature events and Lipari earned his third Animal Medium triumph of the Gold Cup season.

Boon has excelled this summer and with three wins in his last four races he now leads the Gold Cup Kid Kart point standings. Blake has an outstanding opportunity to become a national champ in his first full season of racing!

Lipari has returned to the seat this year and ran very well in the Animal Medium division. After sweeping the weekend at Jacksonville in March, Lipari scored another feature win in day two of racing at South Bend. Jim now leads the Animal Medium standings by 65 markers over Tanner Lee.

“Running the alcohol Animal class has been a nice option for us this year,” Jim commented. “There haven’t been as many racers competing in Animal Medium this year with the popularity of the Pro Gas Animal division, so it’s allowed us to work on the development of the chassis and then we can pass along our findings and research to our customers, without directly competing against most of them. Just about all of our customers ran really well at South Bend and we’re very pleased about that.”

New York‘s Joshua Stark and Michigan’s Cameron Clifford entered the Junior divisions at South Bend with their Coyote karts. Clifford ran Junior Medium and came away with a fifth-place finish on Saturday and a fourth on Sunday.

Stark ran all six Junior classes offered between Saturday and Sunday. The Rochester, N.Y., racer wheeled his sleek yellow No. 39 to finishes of second, third and a couple of fourth-place results.

Be sure to check out Josh’s brand-new website at joshstarkracing.com!

Senior Pro Gas Animal was the largest division at MRP and of the 16 starters on day one, 11 of them were on Coyotes!

In Animal Heavy Mix, Josh Stiefel missed scoring his second win of the year, but he did finish a strong second and third on the weekend at South Bend. Josh is now third in Animal Heavy standings and still has an outside-shot at winning the title.

Josh’s dad, Tim Stiefel, netted finishes of fifth and sixth on the weekend at MRP.

Sarah Luoma entered Animal Heavy Mix for the first time in 2014. Sarah did a nice job in the features, finishing second to Tyler Sandmeyer Saturday and third on Sunday.

With summer now complete and the weather becoming cooler, many local tracks and clubs – including our Genesee Valley Kart Club in Avon, New York – are starting up their fall racing series.

On a national level, if you’re interested in attending the Gold Cup Grand Nationals in South Carolina this October, contact the Coyote shop at 585-352-0806 or email Jim or Mark Lipari today!