Parker Chase to get Experience in Several Forms of Motorsports 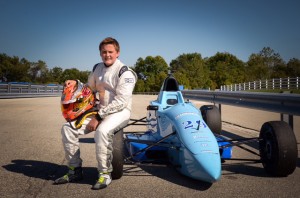 With the goal to progress up the ladder and into the upper echelon of motorsports, Texan Parker Chase is set to make the move. Testing a Formula 1600 car this week at Putnam Park with Chastain Motorsports, Chase will look to see if his skills will earn him a position on the powerhouse team in 2015.

“I am very excited to get behind the wheel of an F1600 car,” explained Parker Chase as he prepared for his trip to Indianapolis. “The team has had great success this season and I think by being able to race with them, I would be able to build on my skills and gain experience in my transition from karts to cars. I am very excited.”

After completing the test, Chase’s schedule will not slow down, as he will quickly return to Houston to compete in the final rounds of the Texas Pro Kart Challenge. Leading the points as he enters the final event weekend, Chase will look to repeat as a TPKC champion, doubling up from his Rotax Mini Max title in 2013 this time in the Rotax Junior ranks as a freshmen. Though the title won’t come easy as the season long championship battle has been fierce, Chase is primed and ready for wheel-to-wheel action.

“A fellow driver and I have swapped the top spot in the point standings on several occasions in 2014 but I was able to secure the lead with a great event in Denton, Texas during rounds five and six of the program.”

Dominating Saturday’s competition, Chase scored a clean sweep on the day taking the pole position, two heat wins and a dominating victory in the day’s main event. Looking to repeat Sunday, some challenges faced the youngster but his experience would reign supreme as he stood on the third and final step of the podium, not relinquishing the lead in the overall series standings.

Like many of today’s junior karting competitors, Chase has a bright and busy future. Looking forward to the rest of the season, the Fernando Alonso Kart driver will see action at the Rotax Pan American Challenge at the GoPro Motorplex in Mooresville, North Carolina in October followed by the SuperKarts! USA (SKUSA) SuperNationals in Las Vegas, Nevada in November. 2015 will see Parker Chase behind the wheel of a Rotax powered kart, Legend Cars as well as a Formula 1600.