Kiwi and Italian Champs Coming to the Race of Stars

New Zealand Champion Daniel Bray and Italian Champion Lorenzo Camplese are the latest high profile international drivers to be confirmed for next month’s Race of Stars on the Gold Coast.

The pair will line-up in the six-speed gearbox KZ2 category at the October 18 event where drivers are expected to reach speeds in excess of 160 km/h. 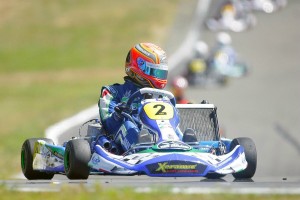 While he hails from New Zealand, Bray has never competed in Australia previously. He has however been victorious on American soil in the elite S1 class in the SKUSA Pro Tour and took the karting world by storm at the KZ2 World Cup in 2012 in Italy. It was at the World Cup where he went with just the goal of making the cut for the 34-driver final. His focus quickly changed when he won five of his six heat races.  Bray was then leading the final before there was contact between he and now Formula 1 driver, Max Verstappen that eliminated the pair.

The Kiwi was in Australia earlier this month as mechanic for Jaxon Evans at the Rotax Nationals in Ipswich, however, this time the roles will be reversed.

“I’m looking forward to coming ‘across the ditch’ to compete in the Race of Stars, I’ve never raced in Australia before, and only been to the Gold Coast on holiday,” said Bray.

“I had the pleasure of tuning for Jaxon Evans at the Rotax Nationals a few weeks ago. I can’t wait to get on track and not be the one watching with the stopwatch.

“To race against the world’s best on a track that we’ve all never raced at is going to be good. I can’t wait.”

For Camplese, who is on track to claim back-to-back Italian KZ2 Championships, the Race of Stars will also be his debut in Australia – a country he has always wanted to visit.

“I have seen and heard a lot of great things about Australia, and the Gold Coast especially, I am really excited about coming to enjoy some of the racing,” said Camplese.

“It will be a very unique feeling racing in a new country but I am really looking forward to it.”

The Race of Stars is powered by the V8 Superfest that surrounds the Castrol EDGE Gold Coast 600. The V8 Superfest is a community events program that is an initiative of the Queensland Government, Gold Coast City Council and V8 Supercars Australia. The free event is open to spectators and last year enjoyed great attendances.