The Los Angeles Karting Championship is racing towards the end of their 2014 season. The Southern California club hosted their eighth of nine rounds this past weekend (September 20-21). As usual, the program welcomed high number of competitors through the gates Sunday morning – 170 entries – for the penultimate round of the year. The series raced under beautiful skies, and displayed the usual great racing the club has come accustomed to, while important championship fights are tightening up heading to the final round of 2014. 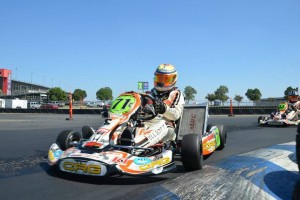 Darren Elliott held off challenges from Rob Logan to score the victory in Round Eight (Photo: LAKC.org)

The largest group of the eighth round was the combined Junior 1 Comer and Junior 1 Comer Pilot classes. In the Fleming Racing Engines Junior 1 Comer category, Ryan Schartau swept the day. Coming in to Round Eight, Schartau started the day by scoring the pole in qualifying over Joseph Daniele by a tenth of a second. The Prefinal saw Daniele challenge Schartau for the win, as the two traded the lead during the midway point of the heat race. With three laps left, Schartau took the lead back, and secured the win. Daniele once again challenged Schartau early on in the main event, but Schartau secured the top spot and drove to a near two-second win. Myles Farhan worked past Daniele in the end for the runner-up position. In the Empire Karts Junior 1 Comer Pilot field, Dominic Gorden scored his fourth win of 2014. Gorden began the day in the second position after qualifying behind Jalen Mack. He took over in the Prefinal, driving to the win and the main event pole position. Cole Keith Cotham, who finished second in the Prefinal, challenged Gorden for the lead to start the main event. Gorden held the lead solidly from lap four to the checkers, scoring the victory by eight seconds over Mack and Shea Weston. Cotham crossed the line in second, but was disqualified for unsportsmanlike conduct.

Participation in the PRD classes on the LAKC has been very successful the last couple of years, and the trend is continuing into the future. David Vasquez was heading toward a clean sweep of the weekend in the D Power Racing PRD Senior class, until Kyle Hayner stole the show in the final. Vasquez got the day going by grabbing the fast time in qualifying ahead of Jordan Robertson. Vasquez was on point in the Prefinal, leading all 10 laps and once again beating out Robertson. The final saw Vasquez get to a great start, until he was no longer scored after six laps. Vasquez had lost a bumper from his kart, and was ignoring the official’s black flag to remove himself from the circuit. Taking over Vasquez’s spot at the top was Matt Johnson. After seven laps of leading, Johnson was overtaken by Kyle Hayner. Leading the last six laps, Hayner recorded his first victory of the season as Johnson and Connor Funk completed the podium. 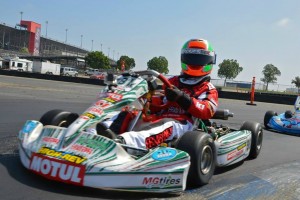 Myles Farhan drove from second on the starting grid to score the win in the TaG Cadet class (Photo: LAKC.org)

KC Cook stretched out his point lead in the Mike Manning Karting PRD Senior Pilot class by picking up his fifth win of the season in dominating fashion. Cook swept the day, from qualifying to the final. Jacob Pope was a half second behind Cook in qualifying, and hung close all day. Pope finished behind Cook at the final checkered flag, while Luis Perez kept the points picture very tight by finishing third on Sunday. In the Phil Giebler Racing PRD Masters class, Paul Bonilla cut Mike Johnson’s point lead down, after sweeping Round Eight. Bonilla, just like Cook was the class of the field from qualifying to the final Sunday. Johnson challenged Bonilla for the win late in the going in the Prefinal, but Bonilla was able to hang on. In the main event, however, it was all Bonilla, leading each and every lap en route to his fifth victory of the season. Johnson hung tough for a second place finish, while Bryan Bender came back third.

Competition in the PRD Junior 2 presented by Mack Motorsports has been very close, and the same continued this weekend. Andrew Murowatz led Chance Skaufel by a mere five points in the championship race entering Round Eight. Skaufel gained some much needed points in qualifying, scoring the top spot over Jonathan Eshom. Andrew Murowatz came from second on the starting grid to lead every lap, and pick up the Prefinal win ahead of Anthony Sawyer, while Skaufel lost the momentum gained after failing to start the race. In the final, Sawyer jumped from the outside of the front row to take the lead, and never looked back. Sawyer drove to a near three-second victory ahead of Eshom as Murowatz completed the podium.

Billy Musgrave continued to do what he is really good at, winning. The younger Musgrave bested Peter Abba throughout the day in the 7G S1 Pro Stock Moto class. Musgrave’s performance at Round Eight earned him his seventh victory of the year, continuing to strengthen his lead in the points chase. Per usual, the S1 racers shared the track with the drivers of the 2Wild Karting S2 Semi-Pro Stock Moto category. The S2 class has been dominated by Arizona’s Kolton Griffin so far this year. Not much changed this weekend, as Griffin swept the day, and scored his seventh victory in eight races. Griffin was joined on the podium by Cameron Jocelyn and Travis Nicklas. Completing the trifecta of sweeps in the combined S1/S2/Open Shifter grouping was Slava Prikhodko as he swept the round in the TM Racing USA Open 125 Shifter class. Prikhodko was perfect from qualifying through the main, mixing it up and engaging in races with both S1 and S2 pilots along the way. Willy Axton finished second, with Chris Curtis in third. 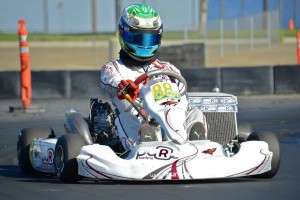 Kolton Griffin swept the day in S2 Semi-Pro Stock Moto for his seventh win of the season (Photo: LAKC.org)

There were more perfect days to be had in the second race group of shifter drivers Sunday. Darren Elliott not only looked good, but looked fast as he picked up another win at the LAKC in the Musgrave Racing Company S4 Master Stock Moto class. Elliott was challenged all day by Rob Logan, but held on to score the Round Eight victory. Logan would finish behind Elliott at the line by just over a second in the main event, while Erik Jackson came home third. Nicky Hays produced another sweep of the action this weekend in the Nash Motorsportz S5 Junior Stock Moto category. Hays showed great speed as he ran at the front of the overall field, and battled with S4 drivers. Hays dominated the day, earning the victory by over 14 seconds ahead of Anthony Sawyer with Noah Grey in third. In the Acceleration Kart Racing S4 Magnum Stock Moto field, Nick George started the day by earning the pole position in qualifying. From there it was Jeff Krogstad going two for three as he picked up the Prefinal and the final win to cap Round eight. George completed an impressive day with a second place finish, while John Reikes completed the podium.

The TaG categories saw strong turnouts in all of the offered classes this past weekend. Myles Farhan got the ball rolling in the RPM TaG Cadet field by posting the fast lap of the qualifying session to edge out Anthony Willis for the Prefinal pole position. Ryan Schartau came from third on the grid and battled with Farhan for the race lead, and ultimately came out on top scoring the Prefinal win with Farhan slotting into second place. Farhan struck back in the final to grab the lead off the green flag from his off-pole starting position. From there, he took off and proceeded to lead every lap en route to the Round Eight victory. Schartau was in a race long battle with Oliver Calvo for the runner up spot, a fight that Calvo ultimately won to put Schartau back to third on the podium.

Thirteen drivers showed up to do battle in the PSL SoCal TaG Masters class at Round Eight. Tenth place in points, Brian Phillipsen, stole the show in qualifying to edge Derrick Burris for the inside front row spot. In the Prefinal, point leader Erik Jackson came from third on the grid to take the win, and subsequently the pole position for the Final. Jackson kept the train rolling in the main event, leading all 18 laps and picking up a four-second victory over polesitter Phillipsen with Tim Meyers in third. Racing in the Buddy Rice Karting TaG Senior class has been strong all year at the LAKC. Point leader Eric Molinatti scored four victories, and added his fifth after this weekend in Fontana. Qualifying was a close affair as Molinatti edged Carlee Taylor by three thousandths of a second for the fast time. Molinatti stayed on point in the Prefinal, leading from flag-to-flag and picked up the win. The main event featured another dominant run that saw him lead every circuit for the victory. Dakota Dickerson and Josh Kurtz flanked Molinatti on the podium. 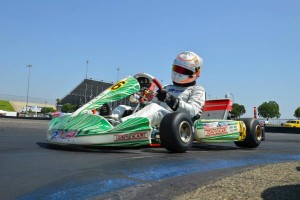 A new name appeared at the top of the time charts in the Pure Karting Honda Kid Karts class, as Sheldon Andrews recorded the fast time in qualifying ahead of Dane Idelson and Nick Curry. In the Prefinal, Curry and Carson Morgan traded the lead with Curry coming out on top while Andrews fought back to the second spot. Curry was solid in the final, fending off a challenge from Chance Gibson and driving to his first victory of the season. Chance Gibson advanced to second with Morgan a close third.

The Los Angeles Karting Championship and its racers now prepare for the final round of competition of the 2014 season, coming up on October 19 for a final chance to take control of the class championships. For more information on the Los Angeles Karting Championship visit them at lakc.org, and like them on Facebook. The LAKC is also looking for some help from individuals in the karting community moving forward. Those interested can contact LAKC President Chris LaTorre by email at chris.latorre@gmail.com .