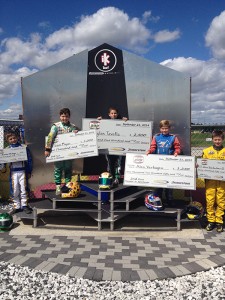 Taking on the demands of the one-mile New Castle Motorsports Park (NCMP) this past weekend, Dylan Tavella would leave victorious and with a cool $2500 in his pocket. Running support classes during the RoboPong 200 endurance race event, which saw multiple Verizon IndyCar Series drivers entered, the young Tavella would contest both the Yamaha Sportsman class, and try his hand in the Yamaha Junior category as well. Earning the victory in Sportsman, Tavella edged out more than 40 competitors to take a big payday, and showed promise in his junior debut as well.

Turning laps for numerous practice sessions all day on Friday, as well as Saturday morning, Tavella had fine-tuned his GT7/Tony Kart entry for the afternoon qualifying sessions on Saturday. Clocking sixth in Sportsman and a respectable 11th in Junior, the 2014 Rotax Mini Max National champion was set for the wheel-to-wheel action to come.

Back on track Saturday evening for 15-lap prefinals in each division, Tavella moved up to fourth in Sportsman as the lead duo checked out on the field. Dropping back to 21st in Junior, the young gun would have his worked cut out for him as he pulled double-duty on the weekend.

The 30-lap finals on Sunday put Tavella to the test. Up first in Sportsman, Tavella went from his fourth place starting position to the lead on the opening lap. Battling lapped traffic and a host of competitors vying for the top spot, the Massapequa, New York resident used the draft to his advantage and worked the field right to come away with the Yamaha Sportsman win and the corresponding $2500 payout.

Tavella’s second 30-lap final surely tested his strength and endurance, and the up-and-comer fared well in his rookie junior attempt, moving up to place just outside the top-15 in 16th overall.

Dylan would like to thank his tuner Charlie Swayne, his engine builder Woltjer Engines as well as all the staff at the New Castle Motorsports Park for putting on such a great event. He would also like to extend a thank you to all his sponsors: Philip Joseph Jewelers, Argyle Jewelers, GT7 Motorsports, Diversified Private Wealth, K1 RaceGear, Oakland Valley Race Park, Iron Rock Motorsport, and A.G.C Machine Corp.