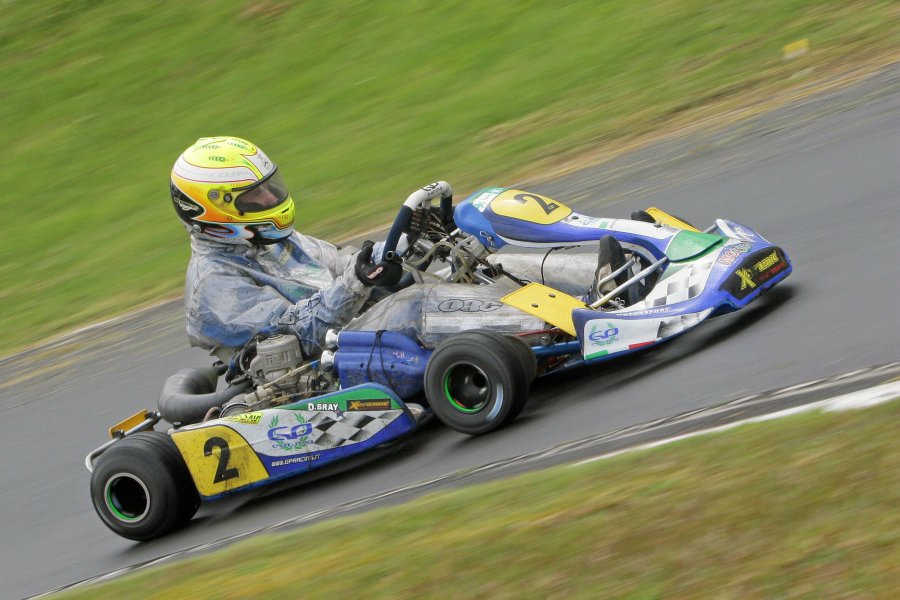 Favourites Daniel Bray, Tom Curran and Garry Cullum got the class titles they have fought all year for but changeable weather and track conditions didn’t make their task exactly easy at a rain-lashed final round of the 2014 ProKart Series in Auckland over the weekend. 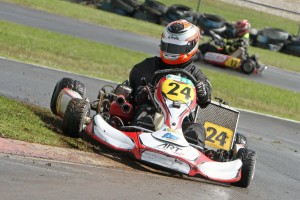 Defending class champion Daniel Bray started well in the premier KZ2 class, qualifying quickest and winning the first heat, but he was beaten to the line in the other two heats by long-time rival Graeme Smyth before coming back to win both the Pre-Final and Final, with Smyth second, and 18-year-old Gold Coast-based Kiwi Jaxon Evans third.

With every race counting and no drops the result was a dead-heat between Bray and Smyth for the round victory with Evans third.

Heading into the round it looked like the big battle was going to be between Evans and top South Island driver Chris Cox for second spot behind Bray.  As it turned out, though, it was two other young guns, Rollo Evans and Jordan Morris, both from Auckland, who made the biggest impression.

Cox was never far from the front, but his fate was sealed by a dnf in the Pre-Final, meaning he had to start the Final from the back of the grid.

That he got back up to fifth by the time the chequered flag came out was an achievement in itself, but by that stage Davies had made a statement with a best of third in the heats and fourth in the Pre-Final.

And after storming through the field in the Pre-Final from the back of the grid to sixth he got up to fourth behind Bray, Smith and Evans and one place ahead of Cox in the Final.

In the other two classes the eventual series winners also came under incredible pressure, more so in fact than at any other round.

In KZ2 Masters, defending title holder Tom Curran had major issues in qualifying which meant he was mired in mid-field – sixth in each heat – then got turned around in the Pre-Final and really only got going in the Final in which he finished fourth. 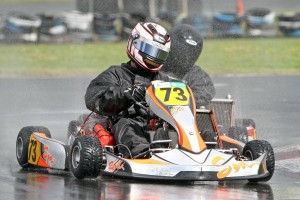 Taking his place, in qualifying and the heats was series promoter Steve Brown, with the quickest lap time and wins in the first two heats.

It was then the turn of fellow Aucklanders Mark Lane and Mark Wheeler to take up the challenge, Lane winning the third heat then Wheeler winning both the Pre-Final and Final, the latter from one of the other class stalwarts, Leo Bult, perennially quick Nelson veteran Grant Kugener, Tom Curran and Mark Lane.

The result was round victory to Mark Wheeler, from namesake Mark Lane with Graeme Lambert third, though Curran had more than enough points to retain series’ victory in the class from Lane, former Stock Car ace Lambert, and Kugener.

There was a similar shake-up in KZ2 Restricted, with former Southlander Mark Elder showing his fine form at the penultimate series’ round last month was no fluke by claiming pole positon in qualifying, albeit by the tiniest margin from recent kart returnee Jared MacKenzie from Auckland and early season pace-setter and title winner-elect Garry Cullum.

McKenzie then proceeded to rule the round, winning all three heats from – respectively Elder, Cullum and Gerhard Benadie.

Cullum was able to turn the tables on his new-found rival in the Pre-Final but the Final proved to be another MacKenzie benefit from Cullum, Elder and class new-face Troy Hopkinson.

Like Tom Curran in KZ2 Masters, Garry Cullum had done more than enough at previous rounds to ensure series’ class victory was his, from Gerhard Benadie and Cameron Dance.

Despite the damp end to the series’ first year under new promoter Steve Brown, the racing was again exceptional with a good base of drivers committed to contesting all six rounds and a constant stream of new faces keen to take the step up to a gearbox category

“For me,” says Brown, “that’s where I get the most satisfaction, seeing all the competitors come together and – even when it was bucketing down on Saturday and Sunday – smile and laugh and give it their absolute best in all their races. That’s what our sport is about and I’m proud to be able to play a part in it.” 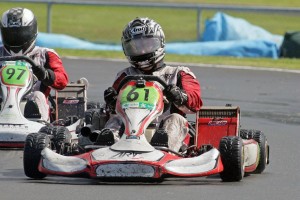