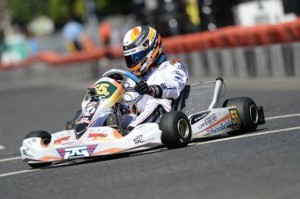 Carter Williams was honored a year ago to be selected the recipient of the Streets of Lancaster Grand Prix Scholarship. The 16-year-old from Clovis, Calif., returns Saturday and Sunday for the 6th annual run on the .7-mile course and season-ending event in the SuperKarts! USA California ProKart Challenge with the goal of standing on the podium to express his appreciation.

“We’ve had people come up to us all year and recognize we won the Streets of Lancaster award,” Williams said. “It’s very cool, a very prestigious thing to win. I would like to get on the podium and thank the city of Lancaster for the scholarship (worth $11,500). It’s meant a lot, been a tremendous help financially over the course of the season.”

“I definitely think we’ve had great results at Lancaster,” Williams said. “I love the track and I know how to drive the track really well. Being the Lancaster race and sponsored by the city makes it a more important race in our season.”

Williams has moved into S2 Semi-Pro Stock Moto and will race with S1 Pro Stock Moto at Lancaster. They are senior-level classes and he’s been racing against older and more experienced drivers. Rookie Williams is third in the S2 championship and will be trying to finish there. He can’t catch leader Kolton Griffin’s 1,370 points and second-place Jarred Campbell’s 1,270 is probably out of reach, too. Williams has 1,049, fourth-place Jake Craig has 1,027 and fifth Blake Murdock 935. There are a maximum of 320 points including 200 for winning the feature available.

Williams was fourth in S2, 10th overall, in the most recent feature at Lake Elsinore, Calif., on Sept. 6. He also finished fourth in class in both heats.

“That race got us up to third in the championship and that was good,” Williams said. “Overall, it was a pretty good result. We were a little disappointed not to be in the top three, that was our goal, but we made some progress and got closer time-wise to the leaders in S1 and S2.”

Williams has been testing the past two weekends, at Buttonwillow, Calif., and the Adams Track in Riverside, Calif.

“Every time we test, we find a just a little bit more and we do better than the time before,” Williams said. “It’s been showing in the races. We’re close to the podium and we’d like to get there are Lancaster. The scholarship and our sponsorships with Musgrave Racing Engines, Phil Giebler Racing and Bell Helmets have allowed us to do a lot more testing this season.”

The Streets of Lancaster Grand Prix, the sixth round of the California ProKart Challenge, begins Saturday with practice at 8 a.m. PDT, followed by qualifying at 12:15 p.m. and the first heat at 2 p.m. The feature races begin at 12:30 p.m. Sunday. They’ll be preceded by practice at 8:30 a.m., and the second heat at 10:15 a.m.

Williams was selected for the scholarship for his driving ability and off-track accomplishments. A junior at Sanger High, he carries a 4.1 grade point average and plays on the varsity water polo team.