New Champions for CIK Stars of Karting Crowned in Melbourne 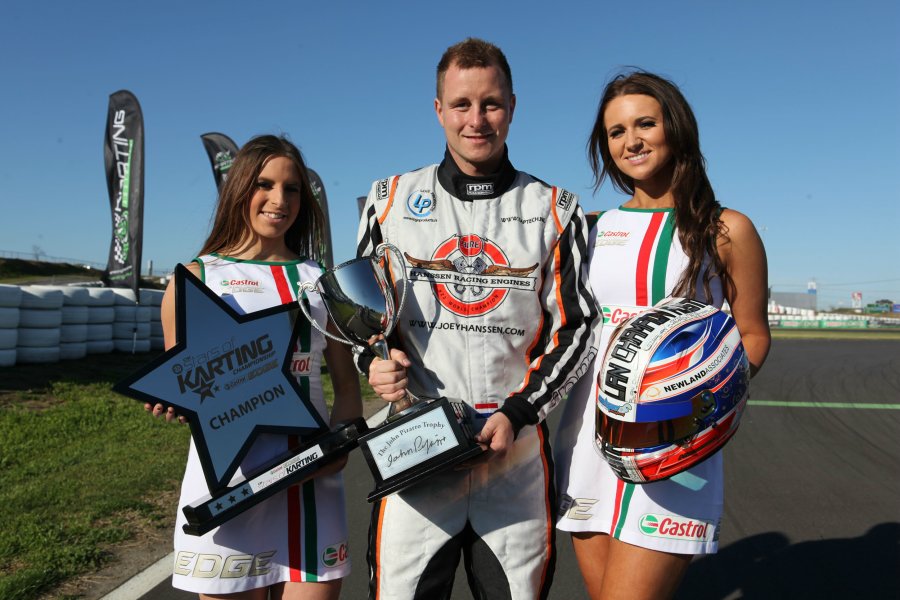 Two new Champions have been crowned at the final round of the Castrol EDGE CIK Stars of Karting Championship with Troy Loeskow and Jayden Ojeda securing their maiden Australian Championships at Port Melbourne’s Todd Road in the KF2 and KF3 division respectively.

2013 KZ2 Gearbox Champion, Joey Hanssen had done enough on Saturday to be unassailable in his Championship assault today, however set about annihilating the outright lap record at the Todd Road circuit. 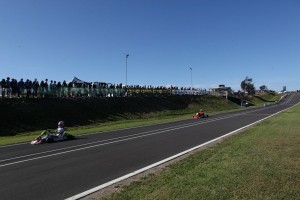 A large crowd assembled for the action at the Port Melbourne Karting Complex
(Pic: Coopers Photography)

Loeskow and Nathan Tigani were separated by a mere 18 points coming into Sunday’s twin 27-lap KF2 finals. When trouble befell PCR Scuderia Australia pilot, Tigani early in the first final, Loeskow’s hold on the James Courtney Trophy became stronger. The FA (Fernando Alonso) Kart driver only had to front for the second final to secure the Title.

Harrington Doyle Racing Arrow driver, Jarryd Ebzery took his first ever Stars of Karting Championship final victory in final one, finishing just ahead of Loeskow. Final two was a completely different story when Loeskow struck trouble in the opening lap. He dropped to the back of the field and charged on, however up front it was a battle royale between Ebzery and outgoing KF3 Junior Champion Liam McLellan in his KF2 debut.

McLellan, whose deal with Energy Corse Australia came together at the last minute, finally got a handle on the 125cc IAME engine and new chassis package and surged ahead, trading blows with Ebzery as the laps wound down.

The young Victorian was able to get past the Queenslander and take a memorable victory on debut. Finishing third was Ebzery’s Pepsi Max-supported Harrington Doyle team-mate, Scott Sorenson.

In the KF3 class, Ojeda had a solid points lead coming into Sunday’s action over his Exprit team-mate, Chris Sandrone. Sandrone fought valiantly at the front with Aaron Cameron and Zane Morse. 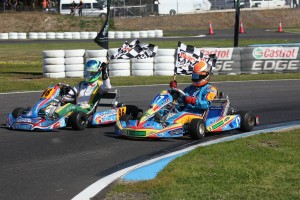 In KZ2, Hanssen was shuffled back in the early stages of final one and fought forward from eighth to cross the line in first. Arch rival, David Sera didn’t finish the race and was forced to start final two from 24th on the grid. Starting alongside him would be Vemme Kart racer, Matthew Wall.

The second final will go down in history in CIK Stars of Karting folklore.

Hanssen was determined to lower the lap record in final two, while Sera wanted to end the season on a high with his Deadly Kart.

Whilst Hanssen took off from Kyle Ensbey at the head of the field, Sera had scythed his way past more than half the field.

He was chipping away at the competitors in front of him, while Hanssen lowered the lap record. Straight after doing so, he went off the end of the front straight away but continued on. Ensbey closed the gap to half a second, whilst Sera got into the top five.

From there Hanssen – driving a Shamick Racing CRG chassis – focused himself and kept lowering that lap record. He set the fastest lap of the race on the penultimate lap, his MG Tyres having been punished to the absolute limit. 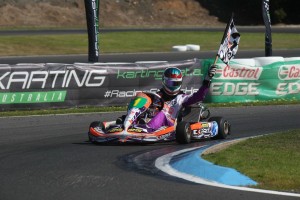 Sera got himself onto the podium at the close of play behind round one winner, Ensbey. Sera’s fellow Victorian Wall, came with him through the field and should have recorded a top five, however struck drama on the final lap only to come across the line 12th.

Thus comes to a close season 2014 for the Castrol EDGE CIK Stars of Karting Championship – with the three Champions crowned at a gala presentation on Sunday evening.