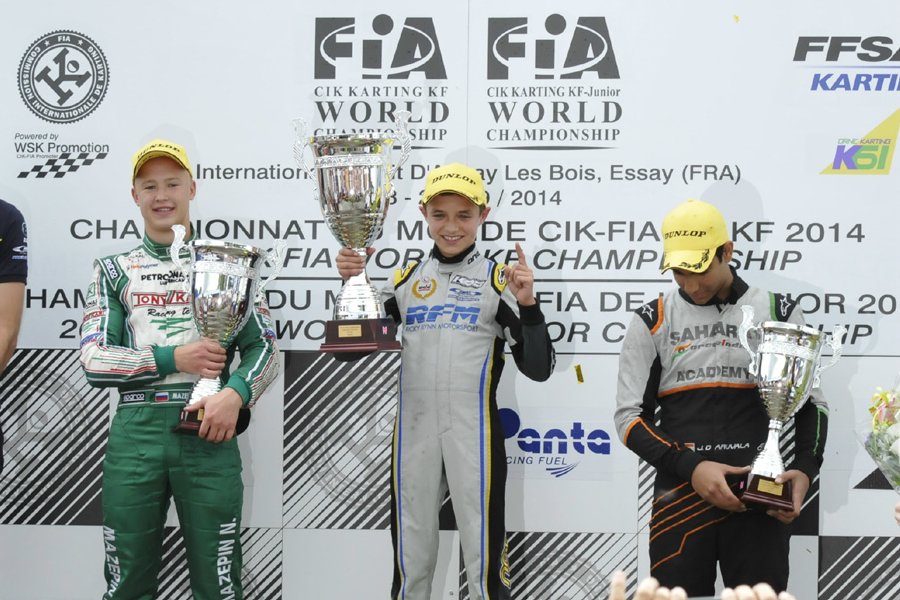 The big day for Lando Norris and Enaam Ahmed has finally arrived: they are the new World Champions of kart racing and their names are now on the list of winners of CIK-FIA titles. On the French circuit of Aunay-les-Bois, in Basse-Normandie, the two Brits brought two more world titles under the Union Jack flag, after the victory of Ahmed himself and of his fellow countryman Callum Ilott (KF) in the CIK-FIA European Championship in their categories. Today’s races were disturbed by the rain, which was expected on the previous days but had never arrived. Frequent showers made the asphalt wet today, obliging teams to operate sudden tyre changes. In this difficult scenario, the skills of the two Champions and of all the drivers who took part in the battle for the top positions emerged and allowed fans to enjoy a great racing show even through the Internet, through the live streaming available on www.cikfiachampionship.com and www.cikfia.tv.

Lando Norris grabbes the World Title
There was Lando Norris (FA Kart-Vortex-Dunlop) on the highest step of the podium of Aunay-les-Bois. It was a result which almost surprised the paddock, because Norris was always among the best drivers throughout the weekend, but  never at the top. On the contrary, especially during the initial phase of the event, the best performance was achieved by the Danish Nicklas Nielsen (Kosmic-Vortex-Dunlop). Norris was second after the qualifying heats, and he kept the position also in the Prefinal, this time behind his fellow countryman Tom Joyner (Zanardi-Parilla-Dunlop). The Final, too, seemed favourable to another protagonist: the Indian Jehan Daruvala (FA Kart-Vortex-Dunlop). Thanks to a great start from the third row, Daruvala led the race for a long time, until Norris decided to lay his card on the table and, from the second position he had occupied since the beginning of the race, attacked and overtook Daruvala. Norris outpaced the rest of the pack and didn’t leave any possibility to his rivals. The battle continued for the other top positions, with a last surprise which took place on the last lap, when the Russian Nikita Mazepin (Tony Kart-Vortex-Dunlop) grabbed the second place overtaking Daruvala. Superb fourth place for Calum Ilott, who beat in fifth position the Dutch Martijn van Leeuwen (both on Zanardi-Parilla-Dunlop) during the last laps, after an outstanding recovery started form the 16th row of the grid. 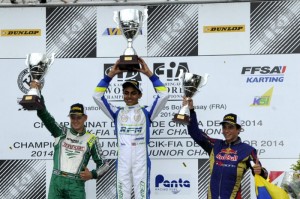 Enaam Ahmed wins the race to the KFJ crown
The perfect weekend for Enaam Ahmed (FA Kart-Vortex-Vega): he is the new World Champion after being on top of the KFJ throughout the weekend, from qualifying until the end. The Londoner had several opponents: the first one was the German Mick Junior (Tony Kart-Vortex-Vega), who was beaten only by Ahmed in the series of heats he took part in. Ahmed, this morning, won Prefinal 1 with a remarkable lead over the Russian Sergey Travnikov (DR-TM-Vega), while in Prefinal 2, characterised by frequent showers, the English Daniel Ticktum (Zanardi-Parilla-Vega) won beating the Belgian Benjamin Lessennes (Kosmic-Parilla-Vega) and becoming the most dangerous rival for Ahmed. Unfortunately, Ticktum did not have a lucky first lap at the start of the Final and dropped back to the last positions. Lessennes grabbed the second position but was obliged to pull over at half race because of an issue with his spark plug. Mick Junior, who had to close the gap after the fourth place achieved in the Prefinal, found himself in second position, even though he didn’t stand any chance to reach Ahemd. Also the Venezuelan Mauricio Baiz (Kosmic-Parilla-Vega) took advantage of the situation and scored the third position after an outstanding recovery which started from the 14th row and after a rather troublesome weekend. Behind the Indian Kush Maini (Exprit-Vortex-Vega), 4th, and the Swedish Anton Haaga (Kosmic-LKE-Vega), 5th, the sixth place was eventually scored by Ticktum.

The world challenge on video
From tomorrow until Saturday 27th, highlights of the event on Motors TV (for broadcasting and tuning details go to www.motorstv.com). The pre-recorded broadcast of the Finals will be also available on Rai Sport 2, on Wednesday 24th at 05.40pm. On Friday 26th, always on Rai Sport 2, the special report with the recap of the World Championship in France.