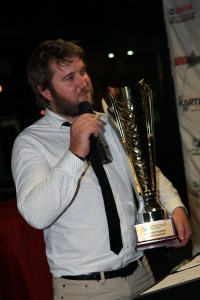 Energy Corse has secured the Karting Australia Manufacturers Championship for 2014.

After five rounds of competition in the CIK Stars of Karting Championship, where the top two drivers for each of the registered manufacturers were awarded points, it was the Adam Graham-led team who took the honours.

The Energy team headed CRG by 20 points at the completion of the Championship in Melbourne on Sunday with the Scuderia PCR outfit third.

“This Championship is a great reward for the hard work by everyone in the ‘blue’ team,” said Graham in accepting the trophy at the Awards Dinner on Sunday night.

In an evening that saw the Champions in each of the three CIK classes officially crowned, along with the winners in the Rookies and TAG 125 Series’, David Sera was voted as the MG Tyres Driver’s Driver of the Year.

“It is an honour to be voted as the Driver’s Driver by my peers,” said Sera.

“It’s one thing to be successful on the track, but to be viewed upon by my fellow drivers like this is a humble feeling.”

During the evening, it was announced that the three Champions – Joey Hanssen (KZ2), Troy Loeskow (KF2) and Jayden Ojeda (KF3) – will form Team Australia at the CIK-FIA Winter Cup in Italy next February. They will be competing aboard the kart that bears the name of Australian Formula One star Daniel Ricciardo.

Ojeda not only took home the Championship trophy, and accompanying Jon Targett Perpetual Trophy, but he was also crowned the Qualifying and Heat Race Champion along with the Rookie of the Year. 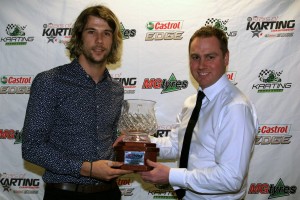 Sera and Hanssen were awarded the KZ2 Qualifying and Heat race honours respectively, while Troy Loeskow and Nathan Tigani shared the honours in KF2.

The Newcastle Kart Racing Club received the Event of the Year Award.

Shamick Racing’s Craig Arnett was voted by his peers as Mechanic of the Year while the Patrizicorse outfit claimed the Best Presented Team for the second consecutive year. 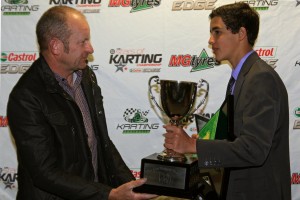