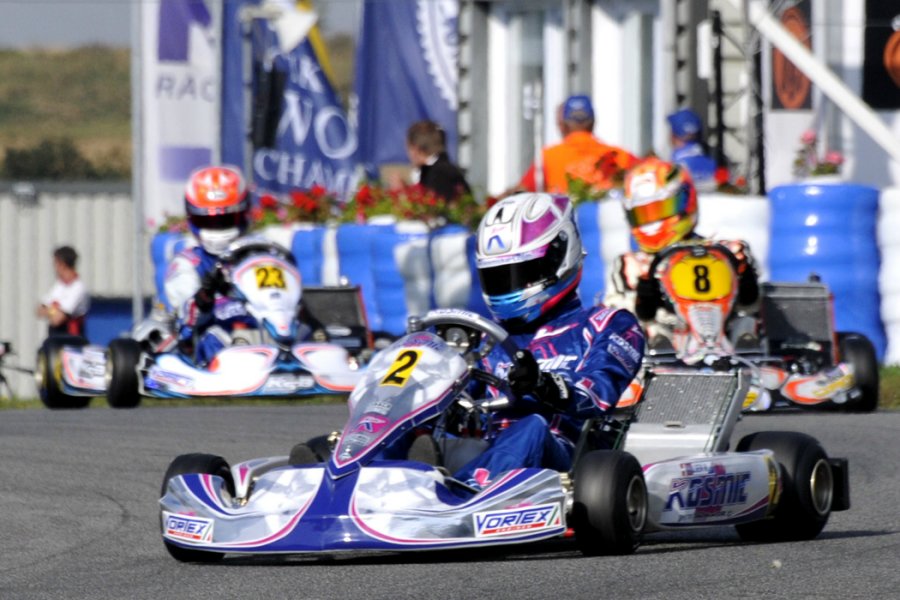 There is one more step to take: tomorrow’s final phase, at the Circuit Internationale d’Aunay Les Bois, which will decide who the new KF and KFJ World CIK-FIA Champions of kart racing will be. The 2014 season is about to end, and the first two World titles are going to be awarded on the outstanding facility set in the Orne department, in Basse-Normandie. The fans of kart racing of northern France, especially those living in the near town of Essay, are ready to reach the circuit to see the final showdown, after viewing the thrilling heats. The outcome of the 21 qualifying races run today – to be added up to the four races run yesterday – is the starting grid of the Prefinals, which will be available live in streaming tomorrow on www.cikfia.tv and www.cikfiachampionship.com.

Nicklas Nielsen attacks in KF
Nicklas Nielsen (Kosmic-Vortex-Dunlop) strongly wants to lay his hands on the CIK-FIA title: today the Danish, after setting the best time in qualifying, pushed hard again and won all the four heats he took part in. The English Lando Norris (FA Kart-Vortex-Dunlop) won twice and he will fill the second slot of the front row next to Nielsen. Norris has been very competitive in KF this year, after his victory of the 2013 European CIK-FIA Championship in KFJ. Also the drivers who occupy the second row can boast an important lists of trophies: Tom Joyner (Zanardi-Parilla-Dunlop), the reigning Champion, won once and will start right behind Nielsen to defend his title. Next to him, the Italian Felice Tiene (CRG-Parilla-Dunlop), who achieved brilliant results today, always scoring top positions. Good chances also for the French Gabriel Aubry and the Polish Karol Basz (both on Tony Kart-Vortex-Dunlop), team-mates eager to attack starting from their third row. The English Callum Ilott (Zanardi-Parilla-Dunlop) was hindered by a bad result in one of the heats and will start only from the sixth row tomorrow.

Ahmed and Mick Jr. ready for the battle in KFJ
Enaam Ahmed (FA Kart-Vortex-Vega) arrived in France as the European Champion and he showed he deserved the title winning five heats, all the races he took part in. An impressive winning streak for the 14-year-old driver from London, even though it was not enough to crush the ambition of the German Mick Junior (Tony Kart-Vortex-Vega): the teeneager driver won as many races and was beaten only by Ahmed. Ahmed won the only race they ran together and will start from the pole-position of Prefinal 1. Next to him, the French Jules Bollier (Kosmic-Parilla-Vega), a driver to follow given his consistent performance – he was always among the first three drivers in all the heats he took part in -. The second row is occupied by Noah Milell (Exprit-Vortex-Vega), who won a heat yesterday, and by the Danish Casper Roes (Energy-TM-Vega). Mick Junior, second after the qualifying heats session, is the pole-sitter of Prefinal 2. Next to him the English Max Fewtrell (FA Kart-Vortex-Vega), always among the first three drivers today. In second row, eager to take the lead as soon as possible, the Italian Leonardo Lorandi (Tony Kart-Parilla-Vega) and the Russian Artem Petrov (DR-TM-Vega): they both won in the heats (Petrov won twice) and would have achieved a better position on the grid if they hadn’t had some trouble in today’s race.

The world challenge on video
Not only live broadcasting: the live streaming is available on www.cikfiachampionship.com and www.cikfia.tv but if you want to enjoy the finale of the World Championship once again just tune into Motors TV (for broadcasting and tuning details go to www.motorstv.com), the TV channel dedicated to motorsport which  will air the delayed broadcast of the Finals of both the categories: the appointment is on Sunday 21st at 07.30pm. The delayed broadcast of the Finals will be also available on Rai Sport 2, on Wednesday 24th at 05.40pm. On Friday 26th, always on Rai Sport 2, the special report with the recap of the World Championship in France.