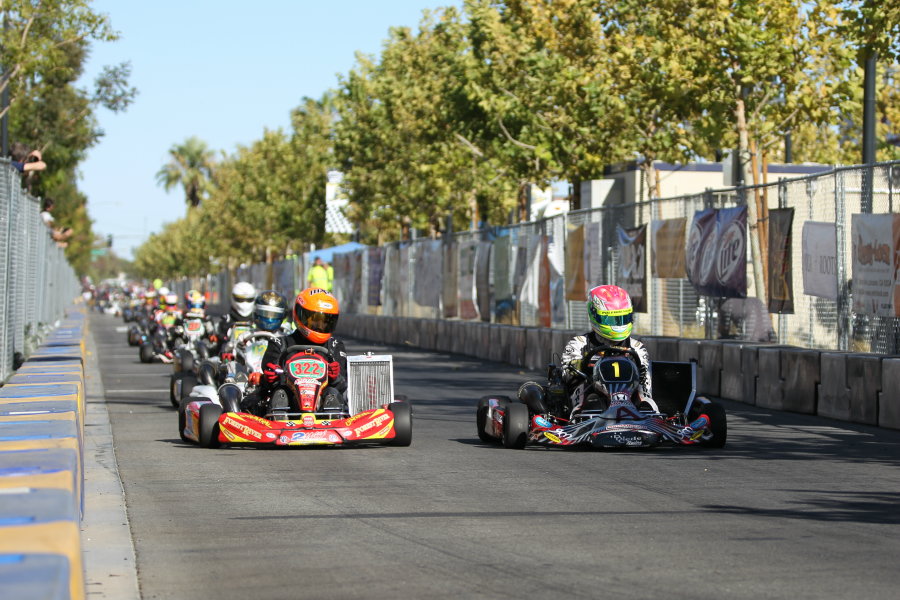 The city streets of Lancaster will be busy with action on September 27-28 when the California ProKart Challenge completes the 2014 season (Photo: dromophotos.com)

The final weekend of racing for Superkarts! USA’s California ProKart Challenge is quickly approaching. September 26-28 will mark the championship finale weekend for the series, taking place at the sixth annual Streets of Lancaster Grand Prix. The city of Lancaster, California – roughly an hour north of the Los Angeles metropolitan area – will welcome racers and teams from all across the country. This will be the fourth straight year for the California PKC program at this venue – working directly with the city to make this a fun event for both those on the track and the many spectators expected throughout the weekend at this city-wide street festival.

The final weekend of the California ProKart Challenge is run differently than the proceeding events of the 2014 season. The first five rounds of this season have offered single race days, including a full day of unofficial practice on Friday. The sixth and final round of competition in Lancaster will be a two-day event. Practice sessions, qualifying, and the first heat race will be contested on Saturday. The second heat, along with the feature races, will be held on Sunday. The format ensures maximum track time for all competitors, as well as ensuring a fun two-day festival for spectators to enjoy.

The same categories offered by the California ProKart Challenge all year will be competing in Lancaster, and the championship battles in nearly all of the classes heading into the finale are still up for grabs following an exciting Round 5 in Lake Elsinore, California. All the title chases are a best five of six format, giving those looking to move up in the standings one more opportunity.

Action in the Mike Manning Karting TaG Senior class has been tight as always this year. Austin Elliott leads Jake Craig heading to Lancaster by a slim 48 points. Each driver has one win to his credit through the first five rounds of competition. Nathan Seegrist, Brenden Baker and Andrick Zeen sit third through fifth in points, and are separated by less than 150 points.

Billy Musgrave has had a fantastic 2014 in the Extreme Karting/Vemme Kart S1 Pro Stock Moto category. Musgrave has three wins in five races, along with two runner-up finishes. Behind Musgrave in the points is Ryon Beachner while Matias Podboj, Peter Abba, and 2013 S2 Pro Tour champion Connor Wagner complete the top five.

The competition in the S2 Semi-Pro Stock Moto class sponsored by Phil Giebler Racing has been intense. Arizona racer Kolton Griffin sits atop the point standings thanks to three wins, including two coming from the tail of the field. Griffin has had to contend with a host of young challengers, including 2013 S5 Junior Stock Moto champ Jared Campbell and S2 rookie Carter Williams – who has competed in 2014 as the Streets of Lancaster Grand Prix Scholarship Driver. Williams was awarded a full ride – including kart, full graphics kit, and race gear – as the city of Lancaster sponsored him to compete in the California ProKart Challenge and the Superkarts! USA Pro Tour.

In the Leading Edge Motorsports TaG Masters category, Ethan Wilson won at Lake Elsinore to put himself at the top of the point standings heading into the season finale. The two-time winner in 2014 is a former victor at SOLGP, and holds a 151-point advantage over Kevin Manning, who has used consistent finishes on the podium this year to challenge for the title. Last year’s SOLGP winner Billy Cleavelin is third in the standings, looking for his second win of 2014 and second straight victory in Lancaster.

The Nash Motorsportz S3 Novice Stock Moto class has seen record numbers in 2014, and a point battle that has gone back and forth. Cris Araujo has been near the front all season, and despite no wins in 2014 leads the championship chase. Araujo kicked off 2014 with three second place finishes in a row. Steve Wetterau’s season has been highlighted by a win at Round 2 and a second place finish in Round 4. He sits close behind Araujo in the second spot. Kalvin Chen, the winner at Round 5, completes the top three going into Lancaster.

Darren Elliott has been near perfect in 2014. The point leader of the 2 Wild Karting S4 Master Stock Moto class has won all but one feature race this season, including sweeps at Round 3 and Round 5. Rob Logan occupies the second position in the point battle, with Willy Musgrave 129 points behind him. Jeff Krogstad leads the way in the S4 Magnum Stock Moto championship, presented by Mothers Polish. In the four races that Krogstad has entered, he has won two and finished second in the other two. Luke Bianco also has two wins on the year, and is second in points.

Christian Brooks enters Lancaster with the championship lead in two categories. The California racer leads the standings in the Sunshine Daydream Creations S5 Junior Stock Moto class, where he has had three wins and two runner-up finishes – holding a comfortable lead over Round 5 winner Nicky Hays, who sits second in points. Jack von Quilich, Roy Fulmer IV and Garrett Dixon fill out the top five. Brooks is also the point leader in the Buddy Rice Karting TaG Junior division. Royal McKee is the lead challenger, with Michael Avansino, Phillippe Denes, and Justice Lepe completing the top five in the standings.

Trey Brown has led the Pure Karting TaG Cadet title chase all season, and enters the finale as the driver to beat. Brown kicked off 2014 in great fashion by winning the first three races of the season. Oliver Calvo has been right behind Brown throughout the season, and sits 157 markers back. Only 25 points behind Calvo is Jagger Jones in the third position, coming off a photo finish in Lake Elsinore over fourth in the standings, Dante Yu. A number of TaG Cadet Rookies will also be on track in Lancaster to close out the season and challenge the top three in the standings: Stephen Brucker, Jullian Busick, and Luca Roma.

For those who are not able to make it to Lancaster for the final weekend of the California PKC, eKartingNews.com will be on-site, providing their Trackside Live broadcast over the two-day street race. Including play-by-play from EKN’s Rob Howden, fans back at home will be able to keep up with the weekend’s action by simply loading up the eKartingNews.com/live webpage.

Those looking to enter the sixth annual Streets of Lancaster Grand Prix –at the discounted pre-entry price – can click over to SKUSAstore.com. All event information is available in the California PKC section, including a detailed event schedule and a list of host hotels. Pit spot reservations are highly recommended, and as always an annual SKUSA membership is required to race. The online store closes on Tuesday night, September 23 at midnight PDT, for all race products, including the discounted price of $405 for entry and race tires. Visit the Streets of Lancaster Grand Prix website for more about the activities on and off the track during the September 26-28 weekend. For more info on anything related to Superkarts! USA, please visit the website – www.superkartsusa.com – or call the SKUSA head office at 951-491-0808.