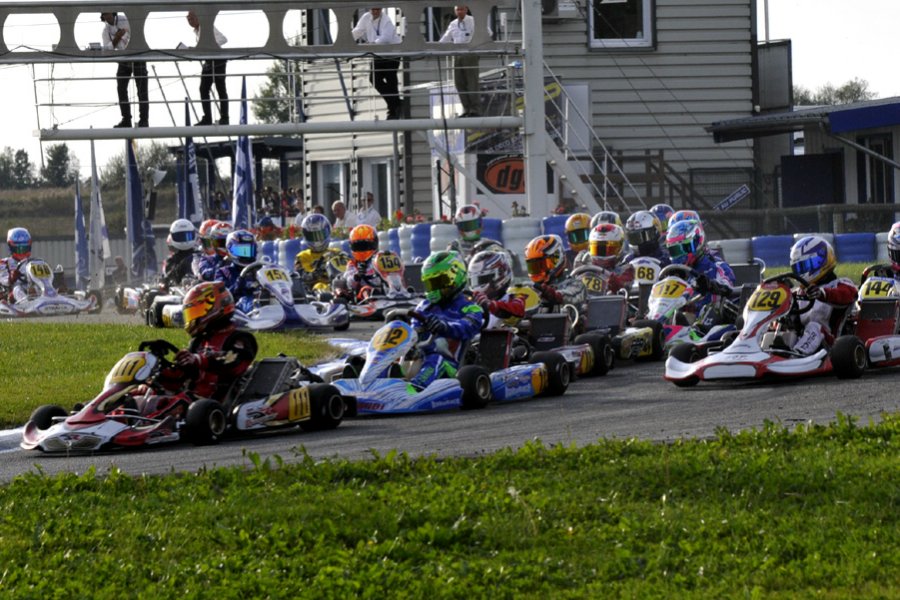 The 2014 World CIK-FIA Championship, for the KF and KF Junior categories, has officially begun in France, in Basse Normandie. Aunay Les Bois, near the town of Essay, is home to the international circuit which hosts, this weekend, the 161 drivers taking part in the World Championship. The drivers to beat are the two new European Champions for KF KFJ: the English Callum Ilott, fifteen years old from Hertfordshire, and Enaam Ahmed, fourteen years old from London. They both aim at winning also the World Title to complete their outstanding season. The qualifying session started today. The times set in qualifying established the starting grids of the first heats, which will continue tomorrow for the whole day.

Nicklas Nielsen, time leader in KF
Nobody was surprised when the Danish Nicklas Nielsen (Kosmic-Vortex-Dunlop) set the fastest time in KF. This season, so far, he has been the toughest rival for Ilott. The Danish, thanks to his 49”093, was 26 milliseconds ahead of the English Lando Norris (FA Kart-Vortex-Dunlop) and 0”037 of the European Champion Callum Ilott (Zanardi-Parilla-Dunlop). The first three drivers seem ready for a great battle, while the Finnish Niko Kari is 4th with 49”196. Special mention also for the reigning champion, the English Tom Joyner (Zanardi-Parilla-Dunlop): in last year’s Championship, in Bahrain, he showed he can achieve great recoveries and today he set the fifth time with 49”284.

Enaam Ahmed sets the fastest time in KFJ
In KFJ, on the other hand, the Champion hit the target again: Enaam Ahmed (FA Kart-Vortex-Vega)  beat into second place the Danish Casper Roes Andersen (Energy-TM-Vega) thanks to his 49”725,  The Danish was only 62 milliseconds slower and also the gaps between the drivers behind the top duo are very narrow: the Russian Artem Petrov (DR-TM-Vega) and the Finnish Paavo Tonteri (Art GP-TM-Vega) are respectively 65 and 80 milliseconds behind. Ahmed confirmed to be in top condition also in the first heats: he won two of the four races run in the afternoon, while the other two heats were won by Petrov and the Swedish Noah Milell (Exprit-Vortex-Vega).

It’s Champions time on TV
The appointment with the Finals of the two categories is on next Sunday. Pre-finals are scheduled in the morning, then the Finals in the afternoon. To follow every moment of the decisive races of the Championship, just tune into Motors TV (for broadcasting and tuning details go to www.motorstv.com), the TV channel dedicated to motorsport which – thanks to an agreement with the promoter WSK Promotion – will air the delayed broadcast of the Finals of both the categories (the appointment is on Sunday 21st at 07.30pm). The live streaming of the event is, as usual, available on www.cikfia.tv and www.cikfiachampionship.com. The two websites will cover Sunday’s events from the drivers’ parade to the podium ceremony of both the categories. The delayed broadcast of the Finals will be also available on Rai Sport 2, on Wednesday 24th at 05.40pm. On Friday 26th, always on Rai Sport 2, the special report with the recap of the World Championship in France, with highlights from the track and from the paddock.