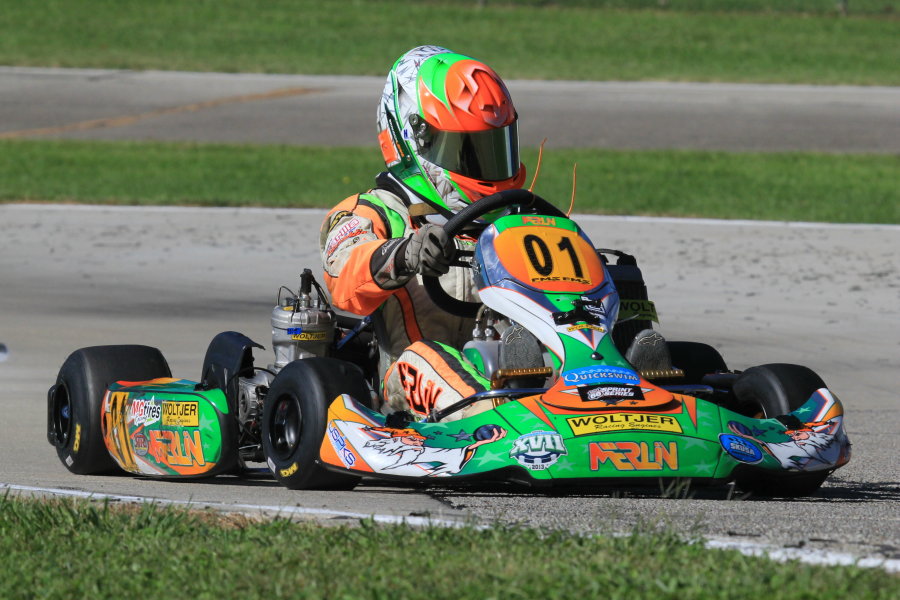 The MG Tire / L & T Manufacturing Route 66 Sprint Series concluded the 2014 racing season at Mid-State Raceway on September 6-7 with a big turnout of 261 entries. The event was sponsored by B & B Electric and was called the Loren Niehaus Memorial Race in honor of founding Mid-State Kart Club member and long serving tech official Loren Niehaus.  Twenty lap finals were contested for the first time as a part of this special Niehaus Memorial event.

After practicing in 95 degree weather on Friday a cold front moved in and the races were held under comfortable 75 degree weather over the weekend. Brandon Lemke captured four wins in the Junior classes over the weekend and six other drivers swept their classes with double wins.  At the Saturday morning driver’s meeting Talan Drake and Chad Kruger each won a free set of MG tires.

The first final racing both days was the RLV Yamaha 100 Senior class with a big field of 22 entries.  Killian Keaveny (Top Kart) made a clean sweep of the weekend by taking pole, pre-final and final wins both days.  Only Cal Stewart was able to hang with him on Sunday finishing .34 seconds back at the finish.  Also taking podium finishes over the weekend were Tim Brinkman, Robby McQuinn, Christian Ledesma, Dan Corcoran, Adam Crepin and Brooks Davis. 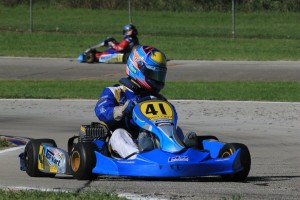 The Switch Racing EnginesYamaha 100 Cadet class was racing next with a large field of 20 entries.  Michael Paterno and Sam Mayer Pulled away from the rest of the field on Saturday with Paterno (Birel) taking the win by .17 seconds. Austin Schaff, Alex Bertagnoli and Matthew Northrop also finished on the podium Saturday.  On Sunday, Mayer would set fast qualifying time however Paterno (Birel) took the pre-final and final wins by close margins of .04 and .07 seconds. Maks Kowalski, Matthew Northrop and Alex Bertagnoli also finished in the top five on Sunday about one second back.

The CKT Leopard 125 Junior class was up next where Brandon Lemke (Merlin) swept the pre-final and final wins both days.  Max Nufer was able to prevent the clean sweep by qualifying on pole Sunday, however  Lemke pulled away to a big eight second win in the final.  Also finishing in the top-five podium on both days were Nicholas Nufer, Dillon Schwanbeck and Emily Hurlbert

The Haddock Limited/Comet Kart Sales Komet class staged next.  Ryan Weyer set the fast qualifying time and won the pre-final on Saturday however Christian Besasie (Merlin) prevailed in the final with Jeremy Roche finishing 1.4 seonds back.  Weyer, Roman Padans and Delaney Keavany also finished on the podium Saturday.  On Sunday Jeremy Roche would set the fast qualifying time, Weyer won the pre-final and Besasie (Merlin) took the final win by just .36 seconds over Weyer.  Roche, Padans and Keaveny rounded out the top five. 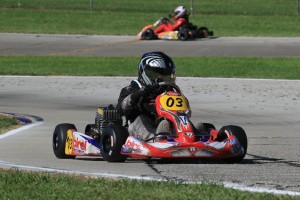 The next class racing was the Triple E Sales Yamaha 100 Rookie class where Cameron Christ would set fast qualifying time on both days.  On Saturday Mason Maine (Tony Kart) captured the pre-final and final win by just .041 seconds over Christ.  Conner Churchill, Mason Santiago and Lucas Smalec also finished on the podium Saturday. On Sunday Churchill won the pre-final however Cameron Christ (Birel) took the win by .09 seconds with a last corner pass. Smalec, Maine and Ben Chefjec rounded out the top five.

The Hollywood Crane Service Kid Kart class was racing next with Pierce Sounderup and Carson Mitchell battling up front for the win both days.  Mitchell took the win on Saturday by 1.18 seconds and by just .176 seconds on Sunday. Jacob Ewing, Adam Brickley and Dylan Julian finished on the podium Saturday. J. Elliot Cox, Dylan Julian and Charlie Kremer finished in the top five on Sunday. 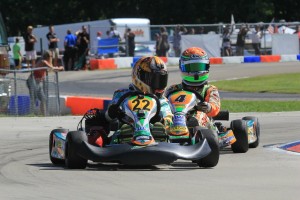 On Sunday, Anthony Granata set fast qualifying time, Tommy Anderson won the pre-final and Elliot Finlayson (Tony Kart) won the final by just .3 seconds over Anderson.  Cavkusic, Granata and Brandon Collins finished in the top five with a six kart pack that included Colton Ramsey finishing nose to tail at the finish. Anderson’s two second place finishes were enough to give him the class point championship.

The next class racing was the Haddock Limited/Express Karts & Parts Komet Cadet class.  Sam Mayer and Alex Bertagnoli battled for the win both days pulling out a few seconds ahead of the pack.  Mayer (Merlin) took the win on Saturday by just .147 seconds over Bertagnoli.  Austin Schaff, Spike Kohlbecker and Riley Yates also finished on the podium Saturday.  On Sunday Mayer edged Bertagnoli by just .103 seconds to take the final win again.  Austin Schaff, Stephen Dial and James Lynch rounded out the top five.

The Briggs and Stratton LO-206 class staged next with eight entries on hand. Jeremy Roche (Merlin) had a clean sweep over the weekend by setting fast qualifying time and winning the pre-final and final on both days.  On Saturday Brandon Klein and Blake Jackson finished about eight seconds back and Matthew Bartling and John Oliver rounded out the top five.  On Sunday the front pack of three finished close together with Roche taking the win followed by Bartling and and Klein.  John Oliver and Blake Jackson also finished on the top-five podium.

The Yamaha 100 Junior class sponsored by Woltjer Racing Engines was up next.  Brandon Lemke (Merlin) would sweep the weekend taking fast time, pre-final and final wins on both days giving him a total of four final winds overall. On Saturday the battle was for second where Dillon Schwanbeck held off Becker Reardon, Alec Evers and Thayne Chapin who finished in a tight pack in the top five.  On Sunday, Lemke pulled away to a seven second win over the next pack of Schwanbeck, Evers and Chapin.  Brant Carter rounded out the top five after Becker Reardon was taken out in the first lap of the final.

Merlin chassis captured the most final wins over the weekend with 10 victories. Birel was second with three wins followed by Tony Kart and Top Kart with two wins each and OTK/FA Kart with one win. For the complete race results, visit www.mylaps.com.