With success in such a talented field, this team is ready to start a winning streak 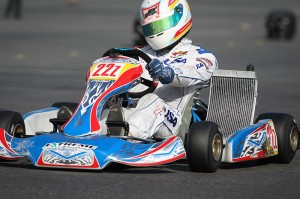 Team Vemme Kart/Extreme Karting definitely has reason to celebrate after their strong showing last weekend at the SKUSA Pro Kart Challenge, a street race, in Lake Elsinore, California. Their latest 2014 KF/TaG chassis went through testing in the motherland of Italy in July to ensure the team had the best, newest frame that had enough speed to win. The sessions they put in at the track in Lonato, in Brescia definitely proved to be worthwhile as Team Vemme Kart clutched the TaG Senior victory with driver Stepanova Nekeel.

Stepanova Nekeel was ready to take his new Vemme Kart/Extreme Karting chassis to the podium in the fifth round of the SKUSA regional program. He began the weekend qualifying third, with only a .004 second difference between him and pole. He continued to challenge the rest of the TaG Senior group and won both heats, setting fastest lap in each.

The TaG Senior final though, wouldn’t be without some drama for the team. Very soon after Nekeel started the final on pole, he was hit, which pushed him back into fifth position. This allowed the ever-quick Andrick Zeen to build a gap to second place by 3.5 seconds. With Nekeel back in fifth, the gap seemed even larger. However, with his SwedeTech Leopard power, Nekeel weaved his way seamlessly through the incredibly challenging field, coming closer to catching Zeen, and clutching second position. With five laps to go, he kept closing the gap, and his new Vemme Kart chassis pulled through on lap 18 as he took the lead and never gave it up cruising to the checkers.

With such a talented, 19 driver strong TaG Senior field, complete with some of the top national talent also including: Jake Craig, Austin Elliot, Brenden Baker, and others, the efforts of fellow Vemme Kart/Extreme Karting driver Kale Kunicki are not to be disregarded. Kunicki had a solid qualifying, gaining him a mid-pack starting position for the heats. He finished sixth in the first heat, setting lap times just a couple tenths off of the extremely talented leaders. An unfortunate DNF would follow him in the second heat however, after a throttle cable issue on the first lap. The main wouldn’t prove to have much more luck in store for Kunicki, as he was taken out on the first lap by a fellow competitor. Though, throughout the weekend, Kunicki proved he has come a long way in a short amount of time, and his speed showed he has a depth of potential.

Thanks from Team Vemme Kart for such a weekend of promise and victory go to Tim Skeel, the efforts of drivers Stepanova Nekeel and Kale Kunicki, Doug Sorensen, Extreme Karting, and SwedeTech.

For more information on Vemme Kart, please contact Doug Sorensen of Extreme Karting Inc at 714.630.3655 or visit them online at www.Extreme-Karting.com.