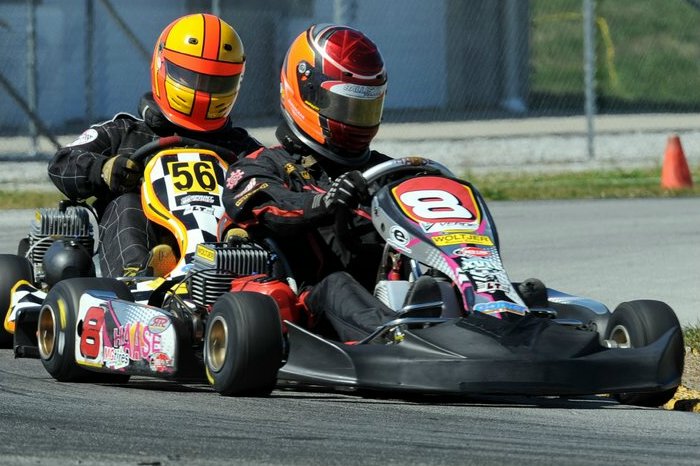 Jarsocrak led the Yamaha Pro field at all four weekends of the USPKS (Photo: DavidLeePhoto.com)

The creation of the SuperCan has provided some great racing in the Yamaha divisions, from Senior to Junior and especially the Cadet division. For years now, we have seen the Senior drivers play a game of chess at 60 to 70mph, around circuits all across the country. Last year’s United States Pro Kart Series was dominated by Joel Jens, winning six of the eight feature races. This year, it was a battle to the final checkered flag each and every round. One driver – Brandon Jarsocrak – seemed to have the edge on the rest of his competitors at each of the four tracks, and was able to use his consistency to gain his first USPKS championship in his rookie Senior season.

The title was not something Jarsocrak secured in the final round at the New Castle Motorsports Park on August 15-17, but instead it was consistency over the course of the four-weekend program. It began in April at the GoPro Motorplex and Brandon making his USPKS debut, taking on a stout 20-driver field in the Yamaha Pro category. Jarsocrak finished third after placing runner-up in both heat races for the opening round. He won the second heat on Sunday, but was second to Dakota Pesek in the feature. His results on the weekend put him first in the standings, and earned him a $1,000 courtesy of Comet Kart Sales.

Stop two was at the challenging Michiana Raceway Park in June. Jarsocrak missed the pole position in qualifying, but led the remainder of the day to secure his first ever USPKS main event victory. Round Four was a showdown with veteran Tony Jump, with Brandon coming up just short, but secured his fourth straight podium finish and another $1,000 check for earning the most points on the weekend. A month later at the Pittsburgh International Race Complex, Brandon looked to be the quickest kart on site. In Saturday’s feature, Jarsocrak crossed the line first, but was moved back one position for questionable contact on the final lap. He made sure nothing would take away his a win Sunday, sweeping the day’s action for his second victory of the season.

The final round at New Castle in August was the final dagger into his competition. Jarsocrak earned his third straight fast time in qualifying for Round Seven. A win in Heat #2 set up for a chance at the victory in the main event. It came down to just he and veteran Eric Jones. At the final corner, the elder Jones schooled Jarsocrak to steal the win. The following day, Jarsocrak won the Prefinal and this time had to fight Jump for the feature win. Into the final corner, Jarsocrak fought off Jump to earn his third victory of the season. It also locked up his fourth straight weekend of scoring the most points, earning another $1,000 pay day to make it $4,000 on the year.

The championship was the first as a Senior driver for Jarsocrak, coming off a WKA Yamaha Junior title in 2013. This season was double duty for Brandon, running in the Leopard Pro division. Starting off aboard a Haase kart, he moved over to the Deadly Kart before settling with a Tony Kart for the final two weekends. He went on to land on the podium three times, including twice in New Castle with a fourth and third. Jarsocrak ended the season sixth in the championship standings.

Jarsocrak is developing as a driver, racing Yamaha and TaG in the USPKS program, and excelling at the Northeast Shifter Kart Series. Competing in the KZ category, Jarsocrak has one win in six races, currently third in the championship standings with the finale coming on September 26-27 at the New Jersey Motorsports Park. First up however is another chance to cash in aboard his Mike Doty Racing Haase Yamaha kart, competing at the Robo-Pong 200 event in the support race. In November, Brandon will make his second attempt in the TaG Senior division at the SKUSA SuperNationals in Las Vegas. 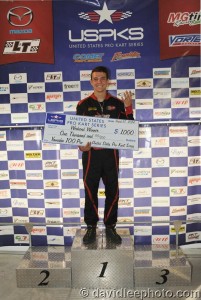 Chassis: Haase
Engine/Engine Builder: Woltjer Racing Engines
Sponsors: Mike Doty Racing, Woltjer Racing Engines, Race Ready Engineering, Red Line Oil, Mom and Dad
Series You Compete In: United States Pro Kart Series, North East Shifter Kart Series
Years Karting: 11
How did you get started in karting? My dad listed all the sports I could play and I picked racing then the next Christmas there was a kid kart under the tree
What has been the high point in your racing career? Winning the Yamaha Jr. championship in 2013 with WKA and winning Yamaha Pro championship in 2014 with USPKS
What are your goals in racing? Compete in some type of professional racing
In a few words, how would you describe your driving style? Calm and smooth
Funniest moment at the race track? Every race with the Mike Doty Racing team