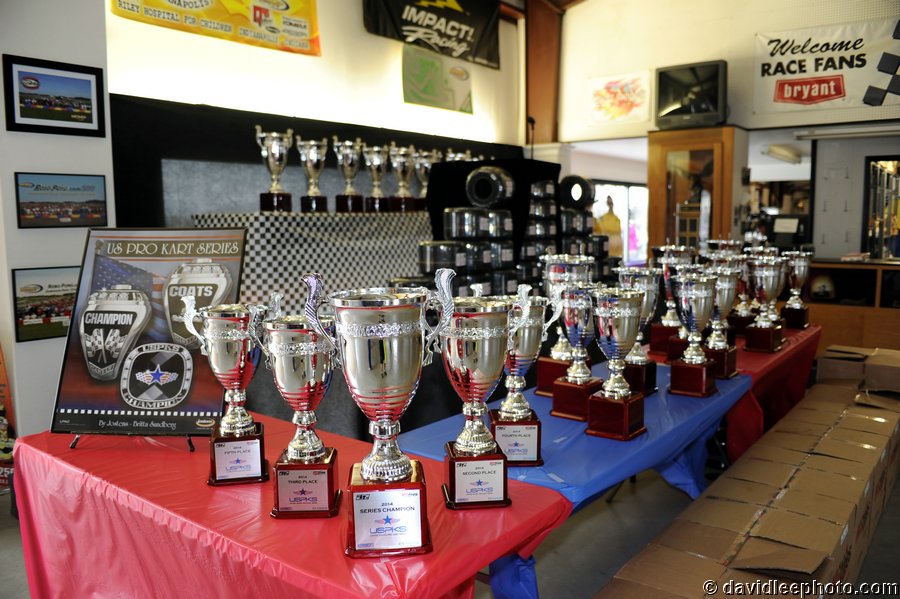 The sophomore season of the United States Pro Kart Series closed over the August 15-17 weekend at the New Castle Motorsports Park facility in central Indiana. The final two rounds of the eight-race championship were contested, and the top-five drivers in each of the eight title chases were recognized during the year-end awards ceremony that Sunday evening. A large prize package – thanks to supporters MG Tires, L&T, Vortex, Franklin Motorsports, Comet Kart Sales, and Mazda – was awarded, including a number of special awards and trips, capping off what was another successful season for the USPKS. 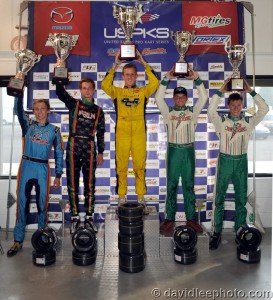 The Franklin Motorsports Leopard Pro went down to the wire, as the eight round fight was a test of endurance. Throughout the season, not one driver appeared to have a solid control of the top spot in the standings until the final checkered flag waved with Florida pilot AJ Myers earning this year’s title. Myers began the season earning the first pole position of the year at the GoPro Motorplex, but was not able to transition that into solid results during the April weekend. It wasn’t until the South Bend weekend where Myers stood on the podium, winning Round Four on Sunday in dominant fashion. Myers bounced back in Pittsburgh to score two runner-up finishes, taking over the championship lead. His second victory of the season on Saturday at the season finale in New Castle gave him more cushion going into the final round. In the end, Myers scored the title by 105 points. 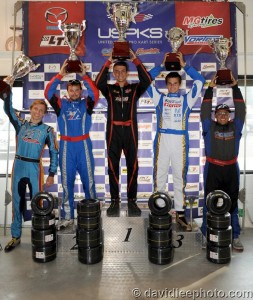 It was a valiant title defense by last year’s champion Kyle Kalish. With a slimmed down schedule that focused mainly on the USPKS program, the Illinois driver battled a string of hurdles to remain in the hunt until the end. The opening weekend saw a win slip away with a mechanical issue that dropped him to fourth. Kalish had to fight his way back up toward the top-five both days in South Bend, and a rib injury in Pittsburgh forced a substitute driver on Sunday. Kalish never gave up, fighting to the end but would settle for the vice-champion. Dustin Stross made it two Florida drivers in the top three of the final standings. Fast throughout the year, Stross used two top-three results, including a runner-up during the final round to secure the third spot in the championship standings. Michigan’s Derek Dignan finished fourth, placing on the podium three times on the year with Round Eight winner Elliot Finlayson making up the top-five. 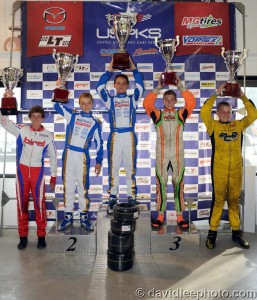 Last year saw one driver stand out for much of the season in the Comet Kart Sales Yamaha Pro division. This year went one step further as Pennsylvania’s Brandon Jarsocrak conquered all four rounds of the 2014 USPKS program. Jarsocrak took the $1,000 check at each of the four weekend events, scoring the most points over the two day segments. Over the eight main events, Jarsocrak finished third or better, including three victories and four runner-up results. Behind him, it was a great fight for the second spot in the standings. Last year’s vice-champion Tony Jump overcame issues throughout the year, earning one victory, a runner-up and three third place results to secure the same result by just 10 points. Two-time race winner Dakota Pesek finished third in his first season competing at the USPKS program, with Derek Dignan fourth and Round One winner Camden Speth fifth in the final standings. 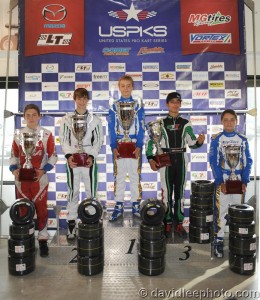 The only driver to return in 2014 and defend their championship was Indiana driver Zach Holden. Winning five of eight races, Holden was crowned an inaugural USPKS champion. This year, the chase for the Woltjer Racing Engines Yamaha Junior went to the wire with Holden coming out on top. Zach began the year with a victory, but it took until Round Five for him to return. Add in two runner-up finishes, Holden clinched the title with a third place result at the final round to win the title by 55 points. Throughout the year, David Malukas kept the pressure on. Malukas won Round Two and Three, but suffered poor main event results the following two rounds. A win at Round Six kept him in the hunt, and despite scoring more points than Holden in the final two rounds, it was not enough. Brandon Lemke ended the season strong, winning three of the last five main events to secure the third position in the standings. Mike McAndrews and Nick Luedeke round out the top-five. 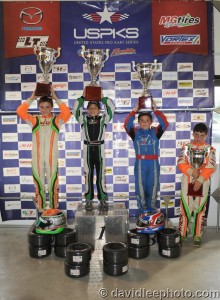 New for 2014 was the GT7 Motorsports Leopard Junior category, with David Malukas becoming the inaugural champion. The new division saw five different winners in eight rounds of racing, with Malukas taking three of main event wins. David opened up as the inaugural feature winner in Mooresville, but it wasn’t until the finale weekend in New Castle to return to the top step of the podium. It was a double win weekend for the Illinois driver, securing the championship by 373 points. Ohio driver Braden Eves improved as the season went on, and climbed the standings to finish second thanks to two runner-up finishes. Third was Round Two winner Anthony Gangi Jr. with Round Five victor Ryan Norberg fourth and two-time winner Zach Holden fifth.

Dylan Tavella became the first driver to win two championships in the same season at the United States Pro Kart Series. The New York driver became the inaugural champion in the Orlando Kart Center Mini Rok Cadet class. Tavella won the opening two rounds, and after slipping to second in the standings following the South Bend weekend, two top-three results propelled him back to the top. Another competitive weekend in New Caste wrapped up the title for Dylan by a 224 point margin. Round Three winner Alex Bertagnoli led the championship chase following the halfway point, and suffered a tough weekend in Pittsburgh. Two runner-up results in New Castle locked up the vice-champion position. He nearly lost that position to a charging Alex Verhagen. The North Carolina driver won the last three main events of the season to move up to third in the championship standings, moving ahead of Lance Fenderson and Sam Mayer. 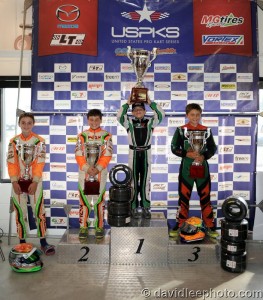 Tavella’s second title went down to the wire, battling defending champion Sam Mayer in the QPS Employment Group Yamaha Cadet. The two split the opening weekend in April, and scored similar points in June. Tavella notched one more win in July, with Mayer finishing just behind. The two never lost sight of each other during the final weekend, but Tavella locked up the title with his third victory of the season. Mayer had to settle for vice-champion, only 30 points out of first. Two-time winner Austin Schaff finished the year third with Alex Bertagnoli and Lance Fenderson making up the top-five in the standings.

It was a three driver battle all season in the J3 Competition Parilla Challenge division. Laurentiu Mardan struck first with a double win weekend in South Bend, and was followed up by Francois Brun-Wibaux double in Pittsburgh. Cristian Vomir was right there all season, and scored his first victory of the season at Round Seven. That and a runner-up on Sunday gave Vomir enough points to claim the championship over Mardan and Brun-Wibaux. 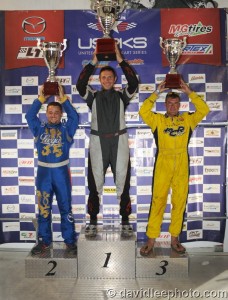 The Switch Racing Engines Yamaha Rookie season belonged to Luca Mars. The Pennsylvania driver won seven straight feature races on the year to comfortably stand at the top of the point standings. Tyler Maxson was the only driver to win aside from Mars, earning the victory in Round One and holding on to finish second in the title chase. Ryan Detlor, Gunnar Bischoff, and Donald Whorton II completed the championship podium.

The United States Pro Kart Series hosted a year-end award ceremony at the New Castle ‘Racer’s Grill’ Sunday evening following the final round of the 2014 season. Food and drinks were provided by the series, as well over 100 people filled up inside the main building, making it a standing room only just as the ceremonies began. The top-five in the eight classes of the 2014 USPKS program were honored, with every driver taking home a championship cup, with a total value of $6,600 for the hardware. Each of the eight class champions were awarded a 2014 United States Pro Kart Series championship suit along with a championship ring and $500 USPKS certificate. All five of the championship podium finishers in each class received a set of MG Tires. Second place finishers received a MG Tire ‘Runner-up’ jacket and $750 USPKS certificate. Third, fourth and fifth place finishers in each class were awarded a USPKS certificate for a free entry and pit spot for 2015. 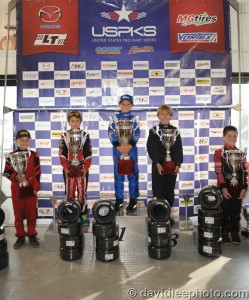 Each race winner in the Leopard Pro division earned a ticket toward a drawing for a trip to compete at the 2014 IAME International Final with Praga Karts and IAME on October 15-19 in France. Elliot Finlayson was selected first, but declined the trip due to scheduling conflicts. Mike Giessen was the selected next, and will travel to Europe to compete at the international event. Also traveling this off season is Colton Ramsey, who was selected at random from a group of eight drivers looking to win a trip to the 2014 Granja Viana 500 event in Brazil. Ramsey will join other MG Tires drivers from America to compete against Formula 1 and many other notable names in motorsports. KartLift and the USPKS gave away another Pit Kart, valued at $1,250. Leopard Pro driver AJ Myers had his name selected from a pool of racers who competed at six of the eight rounds of racing in 2014.

For more information on the United States Pro Kart Series, please visit them online at www.USPKS.com or contact Mark Coats via e-mail mcoats.uspks@gmail.com.