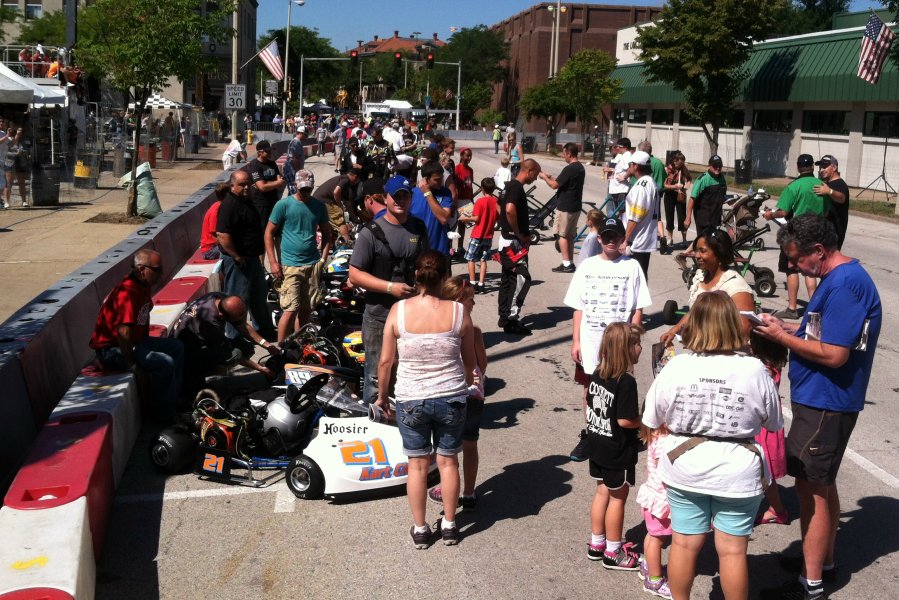 This weekend was more of ‘From the Seat’ then the Riggins scoring trailer at this year’s Rock Island Grand Prix. The 20th edition of this annual Labor Day weekend event is the one chance on the year for the EKN crew to join the drivers we cover throughout the other 51 weekends out of the year on-track, going wheel-to-wheel. While the numbers were at the lowest seen in the 20-year history of the Illinois street race, the event still saw great racing in the 13 categories on track. 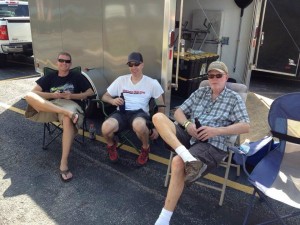 Pre-Race Festivities
This year’s trip seemed to go by fast, as I spent most of it on the laptop while my dad drove the 5 1/2 hour trip, making just one stop for fuel/food. That gave us plenty of time to relax at the Quad City Expo parking lot, the pre-staging area before the streets of Rock Island close down. Last year was the first time I had been there, as I had to meet up with the Victory Kart/McLaughlin Motorsports crew to set up my ride. This year, it was ready to go in the trailer, just needing the pre-safety sticker. A quick load of the karts back into the trailer and it was a few cold beverages with some friends, including the Chappell family from eastern Michigan. A lot of bench racing and talks about the sport and things over the summer went on until 5pm rolled, and the streets closed for the track build.

Once we parked the hauler and set up the tent, it was off to the annual Friday night dinner at Huckleberry’s for some of the best pizza you can get. Plenty of cheese and all the toppings you want. Following dinner, I met up with EKN’s Rob Howden, who began piecing together his Margay with Greg Digness. Not long after, rain began to fall and it was off to check in at the hotel.

We ventured back out to the pits after the rain passed to meet up with those still working in the paddock. One stop was to the CF Racing trailer to see the damage done following their accident on the way to Rock Island. About two hours away, the left rear tire on their hauler blew out, causing the vehicle and trailer to swerve. The trailer dislodged from the ball on the truck, with the chains keeping the trailer attached. Once they hit the ditch, the trailer began to roll. Thankfully, they stopped before reaching the oncoming traffic, and no one was injured. The trailer rolled and the damage was very minimal to what could have happened. The Goettsch family from the Quad Cities area offered to help with the flatbed towing of the trailer back to Canada, truly showing the comradery within the sport. 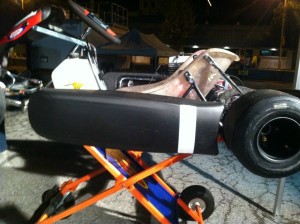 Stealth mode for the Yamaha kart

First Laps
Following a some-what good night of sleeping, the alarm went off for the early driver’s meeting at 7:15am. Scheduled for the 10th class to go off, I had a lot of time to kill before my first practice laps. I spent the time getting rain tires ready, just incase the 60% of precipitation did roll in, although the radar looked clear for the day. Thanks to the Conlin’s for their use of the air compressor throughout the weekend to get the rain and race tires ready. The opening practice is a good time to shake off the rust, and see where the kart is. I came in feeling the gearing was too low, so we added a bunch of teeth. After a full round of 12 classes putting the rubber down, it turned out to be too much of a change. I adjusted back to middle ground for qualifying.

After the first round of practice, I saw Assistant Race Director Rick Fulks at the front of the grid. I asked how his first on-track session went, and he told me he had to sit out to focus the attention on his race duties. I went over to see Rick and Tony Jump, who were providing the Margay kart and Switch Racing Engines Yamaha for Fulks. They quickly offered me the chance to take it out for practice, and without even blinking I took them on the offer.

Making my first ever laps in a Yamaha around the Rock Island circuit, it was certainly faster than a LO206, but not quite the power a TaG machine possess. Gaining more confidence, I ended the session about a half-second off Tony Jump in his Arrow machine. The offer race was then laid down, and I accepted. So we focused on getting new MG Tires on and setting up the kart for the qualifying session. Tony went out with a drafting partner for the first group, and after completing my EKN duties I jumped into the kart for the second group. Once I found my rhythm, I began clocking off some fast laps with one kart just out in front of me. After five laps, I lost the momentum and was not able to get any quicker. I finished second in my group, and seventh overall, about six tenths off the fast time in only my second session in the kart. 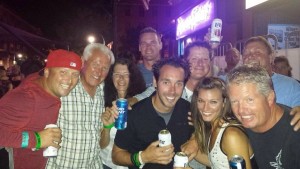 The Travoltas
We celebrated the day by venturing to our annual fest at Osaka Japanese Steakhouse in Moline. Fulks and the Jumps joined us, along with the CF Racing crew at the adjacent table. Lot’s of good laughs were had, and the food hit the spot. Getting back to Rock Island, we ventured to the annual Saturday night party with the Travolta’s, a band based in Canada and only play Memorial Weekend and Labor Day gigs in the United States at RIBCO. Since my first trip to the RIGP in 2004, spending one, if not two nights in front of their stage has been the routine. While the group of racers in the crowd have shrunk, the hard-core crew remains each and every year.

Main Events
Back at it early again for Sunday, the focus was on improving in the morning warm-up. The Yamaha was first, and keeping Tony within my sights, I felt very comfortable with the kart entering the race. In the LO206, the gearing change overnight helped and the wait was on for the races. The Yamaha SuperCan Heavy group was the eighth main event, and the nerves were high. Watching 10 years of Yamaha action at the Rock, I knew there was no room for a mistake. 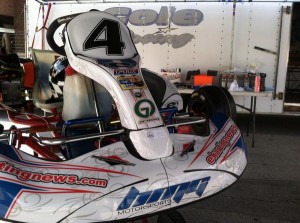 Clean off the line, I fell back to eighth after the first lap, but after completing the first of 20 laps, the driver in front of me made hard contact with the outside turn one barrier and was forced to park his machine. That left me in seventh, and the lead group just ahead of me. My focus was on making no mistakes, and to keep the leaders in sight. Tim Hollowell, a Formula BMW in the late 2000’s, was the driver starting sixth and was in front of me the entire 20-lap distance. Coming from my road racing background, I knew the best thing to do was to help push us closer to the leaders until the end of the race. We did so, and we worked up to the fourth and fifth position by the checkered flag. I was able to celebrate my first ever top-five finish in five tries at the RIGP, and the Jump family were as excited as I was.

During the Yamaha race, I felt a pop on my ribs just before the halfway point. I was in a lot of pain, but thankfully the seat was larger in my LO206 kart, so I borrowed a Ribtect from Howden and off I went for the second race, with only 20 minutes separating the two races.

Starting eighth, I knew I had the speed to run with most of the leaders, but I had no idea I would run in the lead pack the entire time. After some jostling for position, and the lost of a couple front runners in a wreck, I was fighting for another top-five finish. As the race went on, the gearing was again too high, with the engine hitting the rev-limiter and keeping me from trying to outrun a few drivers at the end of the straight. I keep my nose clean, and never let the leaders get away, driving to another fifth place result. 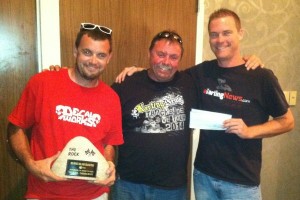 Celebrating with Tony and Rick Jump

First Decade in the Books
For 10 straight years, I have made the venture to the Rock Island Grand Prix. My first will always be a memorable one, seeing all the big names and the large fields, and the packed streets and parking lots full of trailers. Each and every year, something stands out from that event, as it always does. This year, I was never able to wipe a smile from my face as my on-track events were a success, aside for the rib pain I will feel for the next four weeks.

I can’t thank the Jump family, Rick and Tony, for giving me the opportunity along with Rick Fulks. It was a joy to race a kart prepared by them, and if my ribs would have lasted the 20 laps, there is no doubt it could have been a 1-2 finish for the Jump karts. I also have to thank my dad, who has raced at the last three Rock Island GP’s, and yet to finish more than two laps in a main event. Each Monday morning, he’s already thinking about next year.

Moving forward, my only hope is that I can enjoy another 10 years at the RIGP, and bring home one of the them f$@%ing Rock trophies.