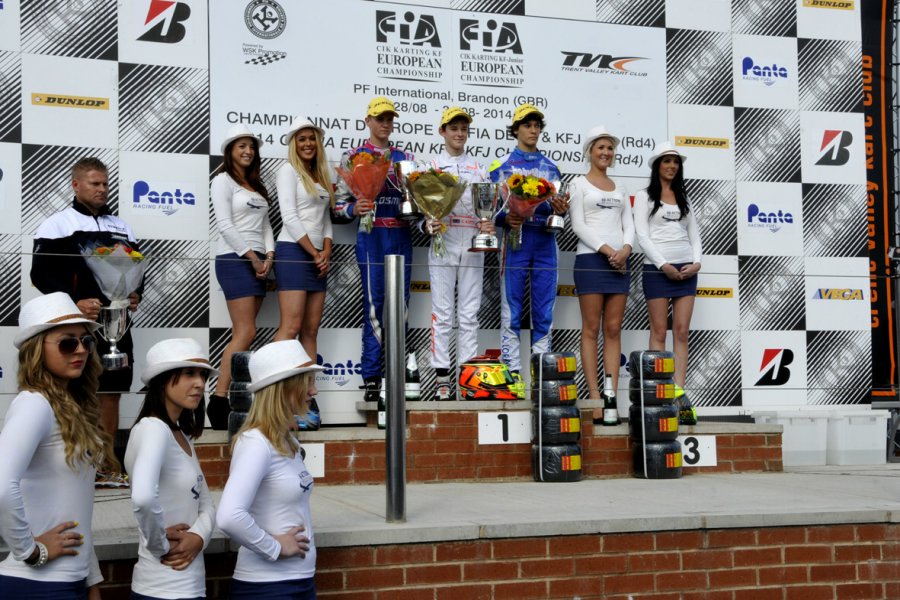 The 2014 European CIK-FIA Championship finished today with a British ending, not only because the final round of the event was held at the  PF International Circuit of Brandon, in the lovely countryside of Lincolnshire. The last British seal on the KF and KFJ Championship was put by two drivers coming from Great Britain, at the end of a really demanding weekend. The circuit near the town of Grantham hosted the fourth and last appointment of both the categories. Here, the English driver from Hertfordshire, the not yet sixteen-year-old Callum Ilott, became the new CIK-FIA European champion for the KF category. He won the title driving a Zanardi-Parilla-Dunlop kart of the Swedish team Zanardi Strakka Racing, managed by Richard Franchini. In KF Junior, the title was won by Enaam Ahmed, a fourteen-year-old Londoner of eastern origins. He won the Championship behind the wheel of a FA Kart-Vortex-Vega prepared by the British team Ricky Flynn Motorsport, led by Mr Ricky Flynn himself. Each racing day of this weekend, starting with the free practice on Friday, was characterized by uncertainty: the final result of this edition of the championship remained unpredictable until the end, until the Prefinal and the Final.

Ilott overtakes and wins. He is the KF champion
He dominated throughout the whole race, but only after a hard session of qualifying. Callum Ilott did not seem at ease on the wet asphalt of the track at the beginning of the weekend, as well as the leader of the championship, Nicklas Nielsen (Kosmic-Vortex-Dunlop). They only set the 7th and 12th time at the end of the session, but their performance definitely improved during the heats, on dry asphalt. They went back to the top, with Ilott leading the group. Today, the English driver’s pace was the fastest already in the Prefinal, where he won preceding his fellow countryman Mark Litchfield (Kosmic-TM-Dunlop), while Nielsen finished third. The Danish saved himself for the Final; here Nielsen had a great start and gained the lead of the race starting from the second row. Ilott, however, was in peak form and, after few laps, he became the leader, increasing the gap lap after lap until the finishing line. Also Litchfield remained in the top positions, finishing fifth behind the competitive Pedro  Hiltbrand   (CRG-Parilla-Dunlop), who was aiming at a podium position but was overtaken by the Italian Alessio Lorandi (Tony Kart-Parilla-Dunlop). The Italian achieved a great recovery, which brought him to the final third position, starting from the sixth row of the grid. He recovered two positions during the last laps and finished behind Ilott and Nielsen. The final podium had a double value for the English driver, who managed to win the Championship thanks to his success on the British track. 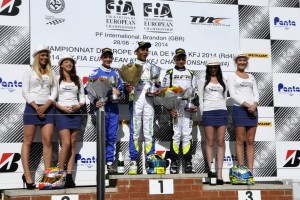 Ahmed crowned champion of the KFJ
For Enaam Ahmed things could have been less tricky, but the race was harder than expected. His main rival was his fellow countryman Daniel Ticktum (Zanardi-Parilla-Vega): his race began well in qualifying, but the rest of his weekend was characterized by a rather poor performance, which relegated him in the back positions. Also the American Devlin Defrancesco (Tony Kart-Vortex-Vega) – another pretender to the title – was soon out of the game. He even had to go through the repechage to enter the Final, where he finished in 13th position. So, the main rival for  Ahmed was David Beckmann (Tony Kart-Parilla-Vega): he was the best in qualifying, in the heats and battled against Ahmed in the Prefinal, finishing second ahead of the Lithuanian Rokas Baciuska (Energy-TM-Vega). In his desperate attempt to close the gap in the championship, the German Beckmann even gained the lead of the heated Final, where also  his fellow countryman Mick Junior (Tony Kart-Vortex-Vega) achieved an excellent performance. The three fought hard until Mick lost definitely ground. Also Beckmann lost ground, leaving the victory to Ahmed, who was able to celebrate both the victory in the race and in the championship. The runner-up was  the Russian Alexander Vartanyan (Tony Kart-Vortex-Vega); third position on the podium for the English Max Fewtrell (FA Kart-Vortex-Vega).

The European championship on TV
On Wednesday 3rd September, at 18.00, the delayed broadcast of the event on Rai Sport 2. Always on the same channel, on Friday 5th, the usual TV report with the recap of the whole weekend of Brandon.