Dittmer, Neilson, and Aldridge double up for Rock trophy as Iseli crowned King of the Streets

The 20th edition of the Rock Island Grand Prix was packed full of excitement and drama that have made up the two decade history of the annual Labor Day street race. Karters from all different backgrounds and experience converged to the Quad Cities for the August 30-31 event to compete in 13 categories. While numbers were at one of the lowest for entries, the fence lines were still packed, the rain forecasted held off, and a number of memories were made. Local drivers Michael Dittmer and Tony Neilson doubled up, as did Indy’s Colton Aldridge coming back from a hospital trip at last year’s event. Father/son Lance and Josh Lane repeated their victories from a year ago, with others adding to their Rock trophy or scoring that first for the mantle.

Briggs & Stratton Motorsports Briggs LO206 Heavy
Top qualifier Connor Lund (Arrow) found himself trailing after the opening lap with Matt Pewe (Margay) along with Canadians Brett Rickeard (Birel) and Fred Woodley (Birel) getting a better jump off the LeMans style start. Lund quickly went to work however and was into the lead by lap five. It look to be his for the remainder of the 15-lap event until a charging Tony Neilson (Margay) moved into second and nipped at the former winner’s lead. On the final lap, Lund ran into some heavy lap traffic, giving Neilson a final surge. Lund fended him off, and scored the victory over Neilson, making his first LO206 start. Scott Barnes (Birel) won the fight for third over Rickeard and Pewe. Rickeard however was disqualified, thus promoting Logan Smith (Arrow) into fifth. 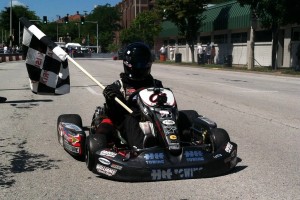 Valspar Paint Yamaha SuperCan Medium
The Yamaha SuperCan Medium category went down the wire once again, as we see year after year at the Rock. Polesitter Michael Dittmer (Margay) led the field early with the top four of Tony Neilson (Margay), Tony Jump (Arrow) and Tim Goettsch (Margay) out away. Jump looked to be the quickest driver of the bunch, moving into second early on and then finally taking over the lead on lap 10. The final 10 laps was a non-stop jostle for position, including a number of lead changes. Neilson went from third to first in one lap, with Dittmer reclaiming the top spot once again before Jump moved into the lead on lap 16. He and Neilson broke away briefly until the final lap. Neilson had taken over the point on lap 19. Jump moved inside at turn two, and was lead as they made their way into turn five. Dittmer made a late move for the lead, with contact occuring. Jump spun and went backwards into the barriers, allowing both Goettsch and Neilson by. At the line, Goettsch scored his third in the category by a slim 0.051 seconds at the line over Neilson. Dittmer drove to third with Dustin Bloome (Margay) and Chad Peppers (Merlin) making up the top five, while Jump dropped to ninth. AT&T IAME Parilla Leopard
Alex Nowysz (Margay) went wire-to-wire in the Leopard division for his second straight victory in the category. Top qualifier Brennan Harrington (Kosmic) was slow at the start, and fell to fourth, allowing Nowysz to take the lead from outside the front row. Building up a lead early, Harrington climbed back to second and stalked Nowysz for the remainder of the race. At the checkered, Nowysz held nearly a two tenths advantage to secure the victory over Harrington. Aaron Snyder (ART GP) and Fred Woodley (Kosmic) battled for third, with contact on the final lap sending Snyder into the barriers. Officials place Woodley behind Snyder in the official results, promoting Kent Schonberger (Top Kart) into the third spot.

Schuff Power Racing Clone Heavy
2012 class winner Connor Lund (Arrow) put himself at the point on the opening circuit of the 15-lap Clone Heavy main event. Two-time winner Travis DeVriendt and 71-year old Albert Cram (Margay) were right on his bumper. Cram however saw his race end on lap four after contact with polesitter Michael Dittmer (Coyote) fighting his way back after dropping back to fifth on the start. DeVriendt took over the lead on lap three, but Dittmer was charging. Around Lund on lap six, he took over the top spot on lap seven. DeVriendt stayed close, until contact with a lap kart dropped him down the order. From there, Dittmer drove to his first Clone victory by nearly six seconds. Lund ended up second with Matt Pewe (Margay) in third, DeVriendt fourth and Mark Petersen in fifth. 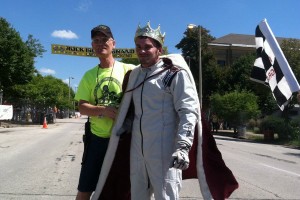 MG Tires King of the Streets
It was a perfect weekend for Texas driver Connor Iseli. Quick throughout practice, Iseli put his Birel machine on the pole position for the King of the Streets category by a full half second over the rest of the field. A clean start in Sunday’s main event was all he needed, pulling out a solid advantage early as the rest of the field fought for second. Colton Aldridge (Tony Kart), coming back from a hard wreck in last year’s event, ran second but was hounded by the rest of the field. Among them was Josh Lane (DR Kart), who drove eight hours overnight after competing in an event in Pittsburgh on Friday and Saturday. Starting seventh, Lane was into second by lap two, but was under attack from Bermuda driver Scott Barnes (GP). They went back and forth until contact on lap six took them out of contention. That put Aldridge, two-time Masters winner Lance Lane (DR Kart) and 2011 winner Derek Crockett in the battle for second. Out front, Iseli drove to a seven-second advantage for his first Rock crown. Aldridge won the second spot with Crockett third and Lane fourth. Josh Lane continued and posting the fast lap of the race in the fifth spot.

CBS-4 Clone Medium
Top qualifier Michael Dittmer (Coyote) made it two for two in the Clone categories, with the Medium victory another come from behind win. Geared for the long run, Dittmer was unable to get off the line like the rest of the field, with Travis DeVriendt at the point as Dittmer dropped to fifth. By lap 11, Dittmer was back at the front of the field thanks to the fast laps of the race. He held DeVriendt off to reach the checkered flag first, winning his first in the category. Connor Lund (Arrow) drove to third with Matt Pewe (Margay) fourth and Derich Cuttshaw in fifth.

AT&T TaG Senior
Colton Aldridge went two for two in the TaG division on the weekend. Winning the Valspar Race Against Hunger event on Saturday, he went wire-to-wire in TaG Senior Sunday for his second Rock in two days. Aldridge was chased by Aaron Snyder (Energy) for a number of laps until he suffered a spark plug boot failure. That gave Alex Nowsyz (Margay) the second position, but came two tenths short of Aldridge at the line. Brennan Harrington (Kosmic) was third with Fred Woodley (Kosmic) fourth and Brett Rickeard (Birel) fifth.

International Trophy Cup Yamaha SuperCan Heavy
The Heavy category for the Yamaha group was another race that ended in dramatic fashion as 2012 winner Tony Jump returned after a year off to score his second ever Rock trophy. Top qualifier Tony Neilson (Margay) led a seven driver lead pack for the first four laps before the shuffling and chess match began. Jump took the lead for one circuit with Tim Goettsch (Margay) moving to the point. He led for three laps until Nielson returned to the point. Jump returned to the lead on lap 12, and despite a number of attempts by the group, held off Goettsch and Neilson at the line for the win. Michael Dittmer (Margay) was in the hunt until he made contact with the barriers on lap 19. That moved the fight for fifth up to fourth, with Tim Hollowell (PCR) and EKN’s David Cole (Margay) moving past Dustin Blomme (Margay) late in the race.

Schurr Power Racing Briggs LO206 Medium
It was eight drivers early on at the front of the LO206 Medium feature race, led by Canadian Fred Woodley (Birel). Top qualifier Connor Lund (Arrow) and Woodley were at the front of the field, with a gaggle of karts behind them. On lap eight, the leaders already caught lap traffic, which sent the group scrambling for track position. As they made their way into turn two, contact was made and Lund went into the barriers hard, flipping over. Matt Pewe (Margay) went with him, and both were fine but out of the race. That left Woodley, and five others to fight for the win. Woodley kept the lead after the turn two incident, until he made contact with the moved barriers from the Lund/Pewe incident. That put Rickeard into the lead for two circuits until Neilson grabbed the point on lap 11. Neilson led the remaining laps to score his first LO206 victory. Rickeard finished runner-up with Bermuda’s Scott Barnes (Birel) in third. Woodley was fourth with EKN’s David Cole (Birel) gaining another top-five result.

Curry’s Transportation TaG Masters
Paul Russo (Merlin) looked to be the driver to beat early on in the 20-lap TaG Masters event. Polesitter Brian Wake (CRG) fell to fourth on the opening lap, but fought his way back to get to lead on lap seven. Shane Wells (Italkart) then was the driver on the move, coming from third and into the lead on lap 14. He was able to pull away in the closing laps to secure his first Rock trophy. The fight for second went to the final corner, with Jamey Brown (Tony Kart) and Wake going side by side. Brown held the inside and the made contact at the apex. Both slid hard into the outside barriers, and thankfully were both uninjured. That allowed Jeff Salak (Energy) to score the second spot with George Myers (Merlin) to end up third.

Tennant Trucking Briggs LO206 Masters
The launch off the line from the LeMans start was won by Ken Williams (Margay), coming from fourth on the grid to lead the opening laps. Polesitter Tony Neilson (Margay) dropped back to fifth, with EKN’s Rob Howden (Margay) in sixth after starting second. A red flag came out on lap four for a wreck involving Jason Reinert. The race was restarted with Neilson able to climb his way into the lead right away. From there, he drove away to a five-second advantage. Behind him was a great fight for second involving Jeff Scott, Greg Jasperson (CRG) and Howden. By lap 12, Howden was into the second spot, but had pressure from Jasperson the entire time. On the final circuit, Jasperson went deep to the inside at turn one, taking over the spot. Scott was able to follow through. Jasperson scored the runner-up finish with Scott in third and Howden in fourth, earning fast lap honors. Completing the top five was Williams. Sunbelt Rental Open Shifter
Unable to make the last to first drive in the King of the Streets, 2013 Open winner Josh Lane (DR Kart) accomplished the second task of the weekend by earning the victory in the final race of the day. Starting eighth, Lane was into the second spot by the end of the opening lap and into the lead by lap two. From there, he drove away to a nine-second margin of victory. The fight for second was heated between top qualifier Eric Riggs (GP) and Scott Barnes (GP). Riggs spun at turn six on lap 17, giving Barnes a clean path to the runner-up position. Eric Chappell (Birel) slotted into the third spot with Riggs continuing on to finish fifth behind Alex Conlin (Birel).