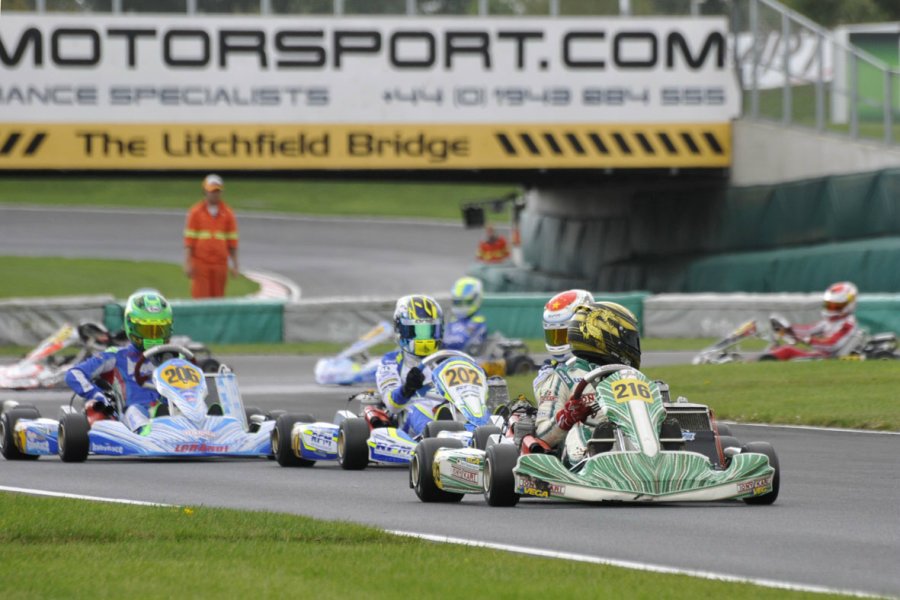 The selection on the PF International circuit of Brandon continues: tomorrow afternoon we will know the names of the winners of the KF and KFJ CIK-FIA European Championship. The rain, which influenced yesterday’s qualifying, was substituted by today’s sunshine. A gentle breeze made the temperature raise up to over 19 degrees. So, the twenty heats run today were characterized by a totally new climate. A new hard test for all the drivers taking part in this fourth and last round of the Championship.  Once again the race towards the CIK-FIA European Titles is thrilling and uncertain, even before tomorrow’s finals. The facility which hosts the event, created by Mr Paul Fletcher, is set in the greenest part of Lincolnshire: a perfect stage for a final, unpredictable sprint.

Ilott in pursuit of the KF title
The English Callum Ilott (Zarardi-Parilla-Dunlop), in KF, seems the driver who stands the best chance to grab the title in this thrilling finale of season. The Londoner won two heats today, while the Danish Nicklas Nielsen (Kosmic-Vortex-Dunlop), the current leader of the championship, won once after a positive streak of results within the first three positions. The two drivers, separated by only four points, will occupy the front row in tomorrow’s Prefinal, with Ilott in pole position. The race to the victory, in the last round of Brandon, is still very uncertain: also Litchfield, today, managed to win twice. He will fill the third slot on the starting grid; next to him the Polish Karol Basz (Tony Kart-Vortex-Dunlop). The latter won one of the heats, as well as the British Lando Norris (FA Kart-Vortex-Dunlop) and Oliver Hodgson (Kosmic-TM-Dunlop), the Indian Jehan Daruvala (FA Kart-Vortex-Dunlop) and the Italian Felice Tiene (CRG-Parilla-Dunlop). Great expectations for a spectacular final!

Beckman challenges Ahmed in KFJ
In KF Junior, the German David Beckmann (Tony Kart-Parilla-Vega) aims at remaining the only opponent of the championship leader, the English Enaam Ahmed (FA Kart-Vortex-Vega), in the race towards the European Title. He won two of the ten heats run today. The final sprint is going to be tough: Ahmed replied winning two races as well, but a drawback in one of the other heats made him drop back to the fourth row of the grid in the Prefinal. Between the two main protagonists we find the Belgian Benjamin Lessennes (Kosmic-Parilla-Vega)  and  the  American Juan Correa (Energy-TM-Vega): they both won two heats and, even if they are currently further from the top of the championship, they still stand a good chance. The same can be said for the English Max Fewtrell (FA Kart-Vortex-Vega), who won a heat, while the German Mick Junior (Tony Kart-Vortex-Vega), winner in one of the heats too, can still aim at the leadership thanks to his fourth position in the drivers’ standing, 14 points behind Ahmed. The pole-sitter of the Prefinal is  Beckmann, with Lessennes in second position. Second row for The Swedish Rasmus Lindh (Praga-Parilla-Vega) and the Brazilian Felipe Drugovich (Kosmic-Vortex-Vega). The English Daniel Ticktum (Zanardi-Parilla-Vega) and the American Devlin Defrancesco (Tony Kart-Vortex-Vega), Ahmed’s closest pursuers in the championship, are a bit behind, with Defrancesco obliged to go through the repechage.

Don’t miss the images of the Championship
The cameras of WSK Promotion are ready for the live streaming of the event. The broadcast will start at 11.00 am (local time) with the drivers’ parade. The live streaming will continue until the end of the finals. On Wednesday 3rd September, at 18.00, the delayed broadcast of the event on Rai Sport 2. Always on the same channel, on Friday 5th, the usual TV report with the recap of the whole weekend.